Sound = Air = Living Breathing is an interactive Sculpture that creates organic movements by the interaction of sound. The sculpture is inspired by the anatomic structure of the respiratory system, such as lungs, diaphragm and thorax. The membrane as the heart of the sculpture contracts and expands representing the inhalation and exhalation.

Breathing is a visualization of the sound emitted by the living beings surrounding the sculpture. The sound waves transmitted by the air we breathe influences the movement of the membrane. The sculpture responds either to a whole room or to an interaction of a individual person.

Breathing is connected to a computer with a microphone. The amplitude of the incoming sound is analyzed by a pure data patch. It converts the data and sends it via an arduino board to a servo motor integrated in the sculpture. A special construction of nylon threads translates the 180° movement of the servo into a contracting and expanding movement of the membrane. 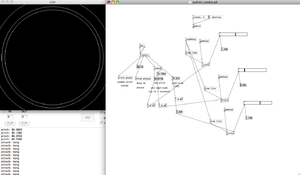 First test: Sound as input to control simple graphics with the [adc~] and the [fiddle~] objects.