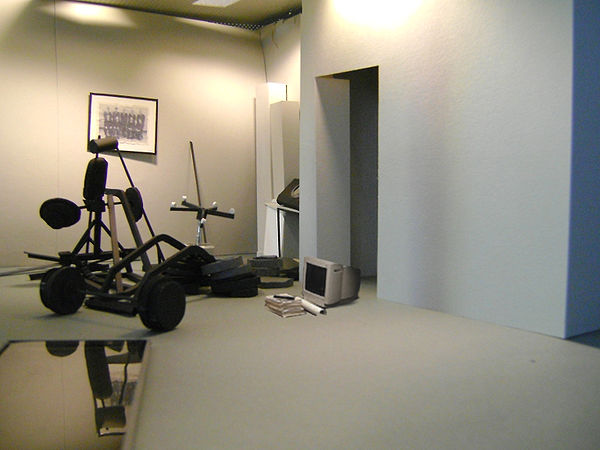 My personal interest during this semester lied in the complexity met in working environments. Architecture, facilities and equipment in working environments in many cases appear to be complex because of the apportionment of labor and the development of technology. The image of an interior does not always explains a lot about its character and sometimes perception is mislead

The idea was to create works focusing on the relationship between man and architecture. I was interested in creating architectural model-environments, the role of which is blur and to incorporate into them symbols and features from different backgrounds, mixing them and setting up completely new environments. What is important for me is to give the impression of an ever-changing environment, whose character is not established and also not accurately perceived. This concept lies on the idea that reality cannot be thoroughly perceived and also understanding can be a very complex procedure. Social conventions or symbols are part of the meanings' building mechanism and interpret perception.

The uploaded pictures are photos of a paper model of a room and the model's actual dimensions are about 40 x 60 x 26 cm. This interior model was used to make video.

The idea was to create an interior space, the attribute of which is not clear. I was interested in mixing different kinds of objects/ symbols in this office-like environment and present a juxtaposing view of it. I was particularly interested in expressing the uncanny element of architectural spaces and the transactions taking place in working environments.

Video (excerpt) AND HERE WE SIT