Concept: A calm experience of sailing sand dunes in VR, or not and looking after some plants in the back of your boat. I really enjoyed the sense of scale you can get very quickly by making huge terrain platforms and its a very liberating feeling to just roam the empty virtual spaces freely in my experience. This concept should work for both VR and non VR usage and is currently leaning into the territory of what might be considered a game concept.

Some concept work modelled and rendered in blender: 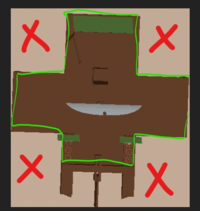 I was thinking of having some interactions like being able to manually move the sail and the rudder by mapping sail height to acceleration and rotation of the rudder to rotation of the boat, with the VR hands to steer the vehicle but this would only make sense exclusively for VR.

After spending lots of time trying out ways to move the boat around with constraints and joints to the Unity standard asset character types (first person, ball, third person) I realised that glueing a bunch of different forces together doesn't seem to make for a good physics situation im going to resort to the internet to get this boat moving properly. As despite spending many hours playing around with the physics and properties of objects it seems unlikely ill find a stable solution with trail and error.

The most successful structure was a rolling ball controller prefab, with a pill shape following its positional movement for xyz coordinates relayed on a loose joint on to a plane in the back giving some smoothness to the motion( which seems redundant since it was a ball moving) which got rotational coordinates from a box in contact with the ground in the front for horizontal orientation. The boat was then constrained to the movement of this plane a seen above. The movement was very impressive as it followed the ground, had shake, and a decent sense of weight, But it was also very inconsistent and is probably overly complicated.

Here are some of the more interesting failed attempts.

After trying out the terrain tools and physics out more I am considering pursuing something similar but with procedural generated endless map and more 'exploration' feeling than gameplay based. There's much progress to be made but I think there's potential somewhere in this mess, and if not I'm enjoying the process either way.

Updated the visuals of the boat, along the way I learned of the developement of a game 'Red Sails' with a similar concept to my project so I am going to do something else based on one of the earlier ideas discussed. However the boat model was slightly updated either way, with the watering bucket now having holes, controller sticks on the driver seat, some fins under the boat, a new sail, indicator lights on the side panels.

Something more geared to a VR experience, trying to convey a comedic element with interactive objects with colliders and physics around you.

The textures were looking very cheap in unity compared to the blender renders so I figured the cheap scuffed look could play into the parody of a hotel.

Here is the final video of the concept, self modelled and with physics and hitboxes that would hopefully work nicely with VR hands. Interactable beach ball, speaker, umbrella and chair. The water sound is attached to the speaker behind the big image of a beach which you can throw over and the sound fades with it, I think VR space could make an interesting space for visual gags and comedy.