This Is Your Life

I was listening to the song “This Is Your Life (feat. Tyler Durden)” by The Dust Brothers (it´s the soundtrack of Fight Club) and I was automatically imagining the lyrics in my head. I visualized some song text passages literally and came up with the question how others would react to my imagination. So I wanted to create a VR experience out of it.

These are the first lines of the song and I decided to make them the first scene of my project. So that you should literally walk right through a heart.

To create what´s inside the heart I got inspired by these parts of the lyrics:

everything is falling apart (line 16)

Therefore I wanted to let the viewer be covered by a bright white light which then breaks into pieces. So in the end there is nothing but black to underlining the dark atmosphere of the alarming repetition of the line “this is your life”.

For me it also means that we all set us under pressure to run through our lives and I wanted to add this aspect to the experience. After you step inside the heart there is a giant ticking pocket watch swinging from one side to the other. It is also the last thing that´s left while everything else fell apart in the end like an echo to reinforce the never ending feeling of being chased by time.

First I separated my idea of experience in two parts that are supposed to be two scenes in the Unity Software later. Then I created the objects for these two parts in Blender: 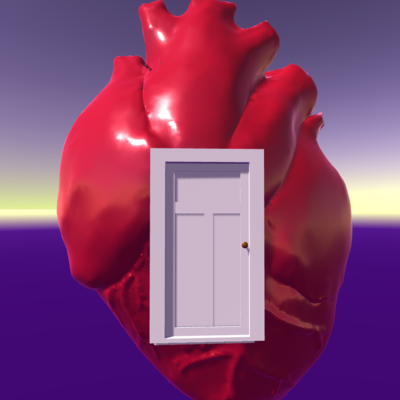 The heart with the door in fornt 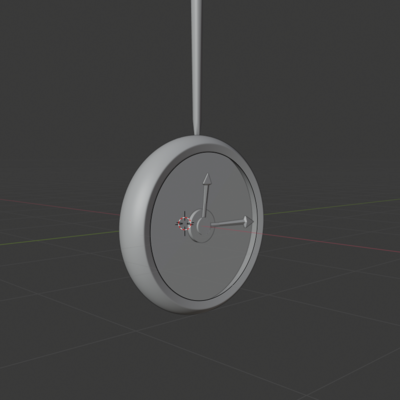 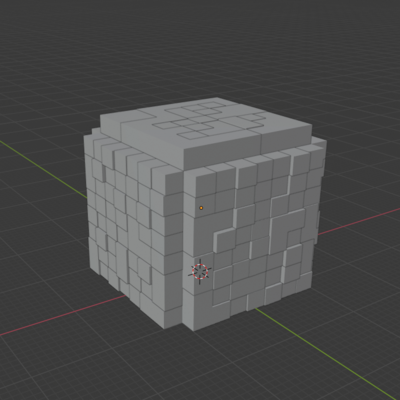 For the first scene in unity I placed the first person character from the standard assets on an invisible plane and added the heart with the door in front. I also added a skybox with a purple ground colour because I liked how the colours worked together. To animate the door I separated the door from the door frame in Blender and connected both via parenting. For the white light inside of the door I placed a cube in the door frame which gets visible after the door opens. The cube also functions as a trigger to change to the second scene. For that I used a C# Script. Therefore, as soon as the First Person Character walks through the door the changing of the scene will be triggered.

I placed the block in the second scene and put the First Person Character inside of it. To make a complete white environment I added a light component to the cube and created a halo with a large radius. Next I animated the smaller cubes that make up the big block and let them fall down. The complete dark skybox I added makes the outside of the cube appear like a vast nothing. In the end I put the big pocket watch in front of the viewer and animated it to swing.

I used the song “This Is Your Life (feat. Tyler Durden)” by The Dust Brothers and picked the parts that inspired me for my sound file. Then I edited it according to the timeline of my animations I made in Unity. I also changed the speed and the pitch of the track so it´s slowing down toward the end and the pitch goes lower. I parted the file in scene one and scene two to add them to the unity project as sound source objects. For the pocket watch I created a component with a sound source as well and added a ticking noise which starts after the sound goes to “...and it's ending one minute at a time”.