The Project and The Game Te-Trees! 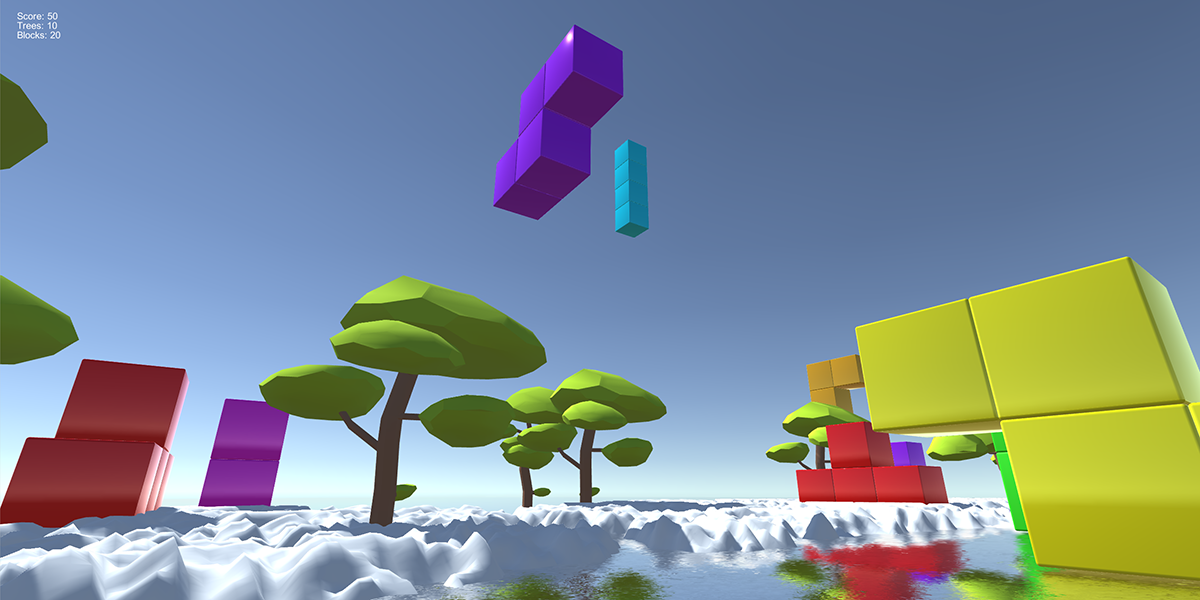 The project "Te-Trees" is an environmental response to the harms caused by the uncontrolled construction of building units in Istanbul, in a way to entertain the users.

The first trailer of "Te-trees"

Istanbul is one of the biggest cities in Turkey, and in Europe, which houses over 15 million people (the estimated number by the officials is higher) and struggles with many problems like traffic, infrastructure and of course the overpopulation.

The number of the inhabitants increase everyday; therefore, the municipality allows many contractors to build more housing units. This uncontrolled increase of constructions causes many forests in Istanbul to disappear.

Popular Tetris Game gave the idea to represent this issue in Istanbul.

Like the pieces in Tetris, those housing blocks are built so fast, like they are falling from the sky. They have little connection in between, are designed mostly in the sake of low-cost high-functionality, by regretting the needs of city-dwellers.

Depending on the fast-changing construction laws, these blocks are also too close to each other, which causes the privacy needs of users not to be satisfied.

The map of Istanbul is set as the playground for the project. It is equipped with the giant trees to resemble the forests of the city. These trees explode, then disappear, when they get in contact with another object, except for the user.

The modeling phase of the game is done in Cinema4D. The objects are designed as low-polygonal dynamic objects to make them able to contact with each other.

The editing of the objects and their connection with each other are done in Unity. It allowed to make them intersect, explode, animate and count the points. The game was released for Windows OSOperating System – for instance Apple's OS X stands for the tenth version of the OS.

There are 2 versions of this game available:

- The first game is a FPSFrames per second (First-Person-Shooter) game, where the user is a giant on the map, trying to hit the blocks falling from the sky non-stop, with small balls, that have unlimited ammunation. If these balls get in contact with the blocks, the blocks will explode, preventing them from destroying the trees. The user can pass through the trees, but the playground is limited with an invisible border. The controlling is done with mouse left button and WASD buttons on keyboard.

- The second game is a VR-Arcade game, where the user is equipped with a VR-Set and 2 controllers. The user is even bigger now, and the playground is set to 5 to 5 meters in real life, where the motion tracking sensors position the user on the field. In this game, the user tries to push the blocks with their hand, to make them hit the borders. If the blocks collide with the borders, they explode and disappear.

In both of the versions;

- If the trees are wiped out; the user loses the game and the message “Game Over! You lost all the trees!” appears on the screen.

- If the blocks exceed the number 30, the user loses the game again and the message “Game Over! You have too many blocks!” appears on the screen.

The user tries to collect points by removing the blocks from the field in order to reach the highscore. The counting of the trees, blocks and the score appear on the top-left side of the screen.

The game can be restarted by clicking CTRL+R command on the keyboard.

The project/game was test during Summaery 2018 in Bauhaus University Weimar by the students of the University. As they comment, the game is exhausting and fun. One of the users commented on it as: “I can play this game fo my weekly sports activity!” The links to the user experiences can be found at:

Of course, we cannot solve this problem by making people play a game. But for them to realize the struggles of the inhabitants of the city, the environmentalists and the professionals like city planners and architects, such a “fun” way is chosen.

During the game, especially in the VR version, the users are getting stressed and use a lot of effort, only to realize that this game never ends. This is the intended result to show them; as long as humankind roams this planet, there will be some of them who will try to harm its nature for their own good.

The green is our friend, we must protect it; or one day, the nature will find a way to remove us from the game.