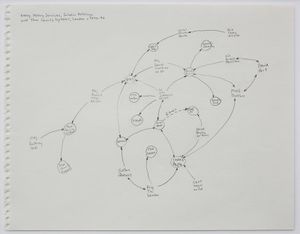 The (In)Visible Networks course is foreseen for developing interactive projects around the video tracking system. The developed projects will connect people and objects into the single system of integrating actors and actants. During the course we will take a look at the interactive artworks, think of their implementations and different uses. What interaction strategies could be used in the hierarchical system? What pros and cons give us a distributed system? How actors/actants of different nature interact with each other?

Instead of focusing on a single programming environment, we will rather focus on OSC[[OSC|Open Sound Control]] (Open Sound Control) protocol enabling interactions between machines and applications of different types. In parallel we will take a look into the terminal use (Windows, Mac), computer network protocols (internet, wireless, routing) and theoretical frameworks (ANT, IoT).

50 % Technical/Aesthetic implementation of the projects
20 % Individual/Group Work
30 % Documentation including 10% of updates in WikiHaiwaiian for ''fast'' (not an acronym). It is the name for a hypertext system for websites where the user may not only read the content but is also able to change it instantaneously through the browser.

Undergraduates and graduates enrolled in the faculties of Media and Design.