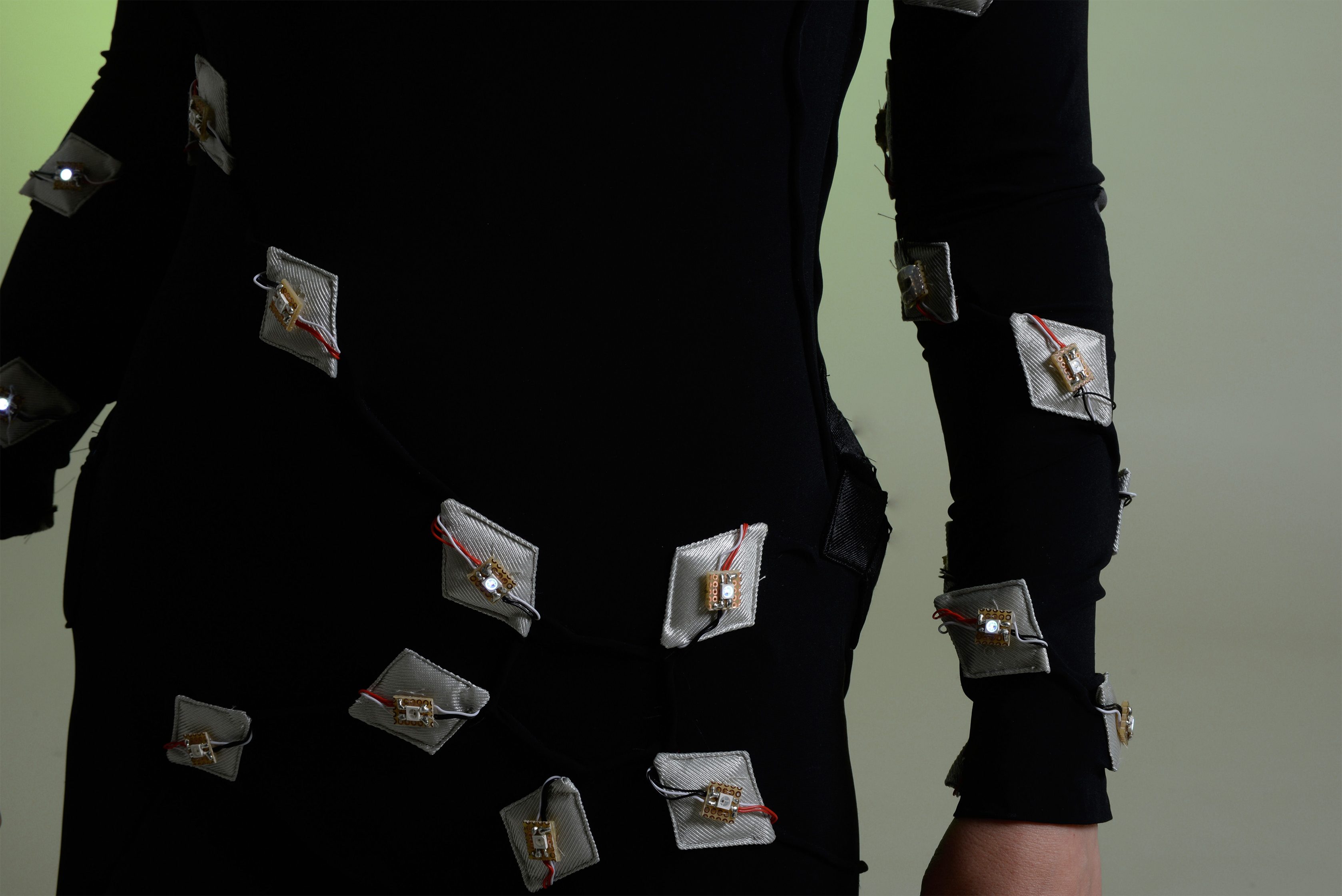 Process of the project

We developed a costume based on self-made textile-sensors, which should react to a dancer’s movement. Therefore we experimented with different types of self-made sensors and their attachment to the body, for example a tilt sensor, pressure sensors, an accelerometer and stretch sensors. Based on our experiments we choose pressure and stretch sensors, which were most reliable to measure the desired input. The final output we choose for the costume was a light output based on self-soldered neopixel chains. We attached the sensors and the neopixel-chains to a self-sewed whole body suit. After the development phase of our interactive costume it was tested by two dancers of the youth and child ballet in Altenburg. Afterwards we evaluated and analyzed the observations and semi-structured interviews, which were made during the test session. Based on the findings we applied some changes on our costume. We soldered the whole circuit together and added shrinking tubes to the soldering joints, which should enhance the wearability and the durability of the cabling.

The costume tries to enhance the movements by the flow of light. Self-made textile sensors were integrated to measure pressure and stretch from the dance movements. Therefore conductive fabric was added under the armpit on each side of the costume to measure the up and down movement of the arms. Also self-made pressure sensors were attached to the knees to measure incoming pressure on this body part for example when a dancers lies down on the floor or is kneeling down. Neopixel-LEDs were spread over the whole costume, so specific dance figures light up different body parts. The light-pattern we programmed was a light flow which lit up three neopixels at once. The flow started at the neopixel chain close to the sensor which measured the movement. Overall five neopixel chains were added to the costume consisting of 7 to 15 neopixels. One neopixel chain was wrapped around each arm and each leg. The last chain was attached to the upper body part of the costume. Everything was integrated into a whole body suit, which allows flexibility while dancing and almost invisible technical parts. For the integration of the technical parts and the neopixels we used diamond-shaped patches in a light color to cover the cabling of the neopixels, the Lilipad and the battery case. For the neopixels small holes were cut into the diamond-shaped fabric to see the lighting pixel. On the left-hand side of the costume all cables were soldered together and covered with shrinking tubes to avoid short circuits. Before we soldered the loose cables on the left-hand side, they were pulled through small fabric tubes which were sewed in the costume to avoid an entanglement of the dancer and the cabling. 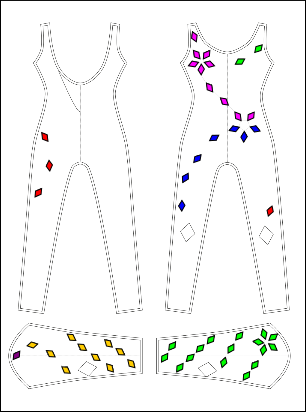 After all we developed an interactive costume which reacts to special movements. While doing so we have learned a lot about conductive materials, textile sensors and the requirements, creation and evaluation of an interactive costume. Nevertheless we need to mention that we based our decision, which sensor we should finally use, on one special given choreography, but the used sensors and the developed costume turned out to be suitable for other choreographies as well.

Discussion of methods and process

The main methods applied in the project were interdisciplinary work, observation, and interviews, but also experimentation and material centered design were used. The observation provided new insights to dancing and the movement of the human body, as well as the usage of the designed costume. Every time we went to Altenburg to talk to the dancers we returned with new ideas, new knowledge, and a refined look on our project. Not only did the work with the dancer add a meaningful flavor to the project, it also grounded the costume in reality. Dance costumes must be flexible to allow or a lot of movement, and be robust enough to ‘live’ through these movements as well. Although this is a known fact in theory, only a dancer can prove if these issues have been taken care of properly. Not only this but they also came up with issues we gave little or no thought such as thermal issues, or self-consciousness caused by the costume. Still the opportunities for observation of and interaction with the dancers were few, and as both parties, dancers and project members, were inexperienced in this field, the project might have greatly benefited from more of these exchanges. This also applies to the interviews, as they were greatly helpful but too few in numbers. These issues are due to the spatial distance between dancers and project-team, as well as to time pressure (and probably other issues).

Time pressure was also a constant throughout the whole project, as an exploration phase and the development of sensors as well as the fact that we are students who still have to learn certain techniques, led to less time being available for the design and construction of the final costume. This almost dictated the output used by the costume having to be light or sound. Also the restriction placed on the development by the project definition, e.g. using only self-made sensors, developing for no specific dancer, developing for non-professional dancers, influenced the outcome of the costume greatly. For example using readymade sensors that work more precise, and with a wider range of possibilities than self-made sensors might have led to different interaction methods.

The team communication had to take hurdles as well. Being from different disciplinary fields meant that a joined language had to be found. And due to human curiosity each participant wanted to mingle in fields that were not their field of expertise. This led to clashes of wishes and interest and caused distress and arguments, time which could have been spent working otherwise. In the end a system of task distribution was developed. Sadly and contradictory to the idea of interdisciplinary work this meant that each team member kept mostly to their field of expertise. Also the splitting of the project team into three costume groups provided a contest like atmosphere, where each group constantly compared their costume to those of the other groups. Opportunities for between group knowledge sharing were missed, leading to work being done twice (once in each group). Faulty materials destroyed the work of days (non-condutive thread), or added additional work (soldering neopixels) that could have been avoided.

But despite all these difficulties, the designed costume was enjoyable to the dancers. The costume also incorporates technological and design specific features and forms a conceptual whole. Surely there are still things that can be improved given the time and further studies, for example the stability of the costume.