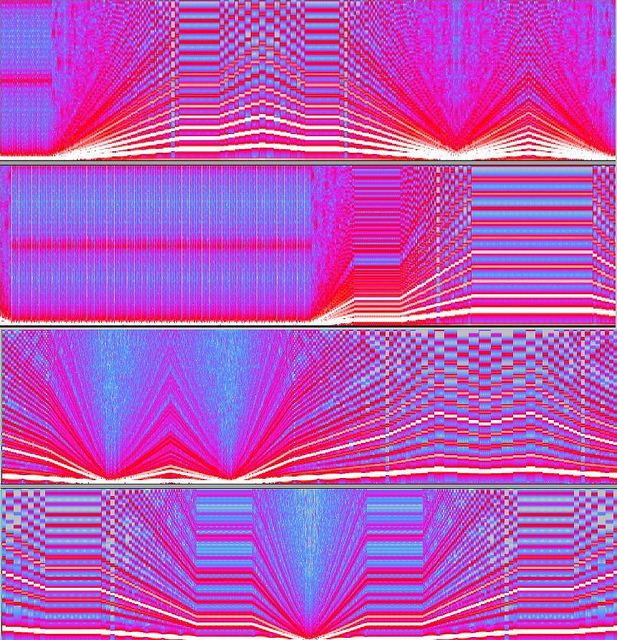 Interactive costumes, so far, usually visualize actions with visual methods, such as LED lights, video mapping or movable parts. We wanted to try a different approach, namely visualizing with sound. One paper uses the term audiolizing to describe body movements that are transferred into sound. However the word is rather hard to pronounce and the direct takeover from visualizing sounds naive. Therefore we chose to call such a method to visualize body movement in dancing by sound “sonification of dance”. Sonification usually is used to visualize sensor data (for example the click of a geiger counter) with non speech audio.

Wikipedia: Sonification is the use of non-speech audio to convey information or perceptualize data.[1] Auditory perception has advantages in temporal, spatial, amplitude, and frequency resolution that open possibilities as an alternative or complement to visualization techniques.

Examples of auditory display reach back to the 50s when researchers experimented how they can represent multi dimensional real time data in a human perceptible form. Terms sich as auralisation and audiation come from the same word wordstem but describe different things.

There exists costumes and sensors that can create music, or sound, from body movements. However these devices are targeted towards musicians and not dancers. Famous British musician Imogen Heap created in a collaboration with computer engineers and other artists gloves that can make music.

With devices such as this one, the movements the performer makes are made with respect to the musical notes, harmonics and beats the musician want to achieve.

Our costume will be tailored for dancers, therefore the sound output will depend on the dance poses, the body movements, the performers have in their mind. In a free choreography both will influence each other and the performance becomes interactive. In a trained dance performance, using prescribed movements from start to finish, we will not experience sound as interpreted by a musician but we will hear the sonified dance movements itself.