The drawing instructions are sketched out here:

The result is here:


This centralized ray matrix is a visualisation of a random distribution of interconnected points.

2a. Curve controlled by randomness

2b. Curve controlled by randomness - bonus

1. Generative turtle walk
This turtlewalk follows a set of commands and repeats itself at a different angle when the turtle restarts.


The red dots are the turning points of the route, but displaced.


The module of this turtle is a kind of cardiograph. 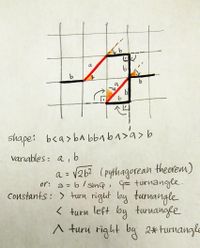 2. Dancing fractal tree
This fractal tree is controlled according to the angle set by the slider at the lower left.


Each set of branches is thinner and whiter than the previous one.

Braitenberg vehicle
These creatures are attracted to light. When reaching the border they make a U-turn.
The fun starts with a click of the mouse. While it lasts, the vehicles leave a red trace and the potential newborns leave red dots.

Upon releasing the mouse, newborns are introduced in the canvas - but they only live until the next click takes place.


The Braitenbergs are drawing a portrait of a friend of theirs, Hal 9000.


The needles are initially restless, but after a while they gradually tune to shape constantly shifting patterns of horizontals and verticals.
A drag of the mouse over the compasses introduces extra angst and colour to the system.
The characteristics of the grid are adjustable through the GUIGraphical User Interface.


Stepping on variations we studied in class and the coding sessions, I tried to combine the idea of simulation
with my interest in the process of wayfinding.Braitenberg Vehicles of type 1 (fear) are introduced to
a simulation of urban space. They leave their homes and make their way through the city.


City blocks are generated through the GUIGraphical User Interface, whereas citizens are introduced with a mouse click.