*Youtube link BioArt is an art practice where humans work with living organisms and life processes. On the other hand, in bioart we look organisum's death more often than everyday life. When i observed Daphnia,i saw one of dead dapnia under the microscope.I would like to know what happen to daphnia after death. Under the microscope, daphnia's body looks big like a building which made by glass. At the same time it was freaked out. Whan a plant, animal, or insect dies, that plant, animal, or insect is broken into tiny pieces and those pieces become part of the soil. This is called decomposition. Bacteria, fungi, and some worms are what break down dead plants, animals, and insects. The bacteria, fungi, and worms are called decomposers. Decomposers need to eat some of the dead things so they can live and grow. The tiny pieces left over after decomposers eat become part of the soil. Living plants take what they need from these pieces so they can grow. The parts of these pieces that living plants take to grow are called nutrients. So, living plants make their own food, but they also need to get nutrients from the soil. Decomposers help provide these nutrients. It is not just on a forest floor that decomposition is important. Death and decomposition are an essential part of all life cycles on earth. To enable successful birth and growth of young plants and animals, older specimens must die and decompose. This limits the competition for resources and provides a fresh source of essential nutrients for new generations of life. 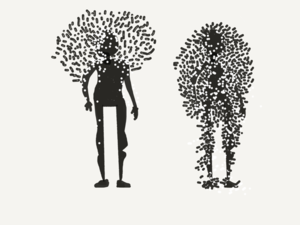 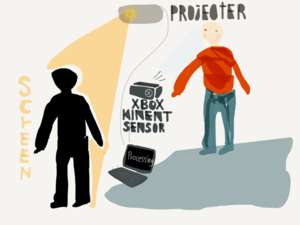 After death, immune system doesn't work anymore. thus enzymes start to breakdown of surrounding cells and tissues.(self digestion) In the second stage(bloat),bacteria which are parasitic in human bodies start to eat human body. most number of bacteria live in intestine. so start to decompose at intestine. to decomposition it starts from inside, not outside. countless microbiome in a body take over body from human when human pass away.

In a room, visitor can see their shadow on the screen. visitor's body shape captured by kinetic camera. the shadow will be decomposed by microbiomes. Bodies are, after all, merely forms of energy, trapped in lumps of matter waiting to be released into the wider universe.

Using processing i try to make a prototype of work. before that, first hack into xboxs kinetic camera (done) and also i have to be familiar with image processing. In the prototype, particle will be replace Bacteria, sort of worms and maggot.

Salvador Dali, Figure with Drawers for a Four-part Screen, circa 1934
From flickr, Philip Cheng All Rights Reserved 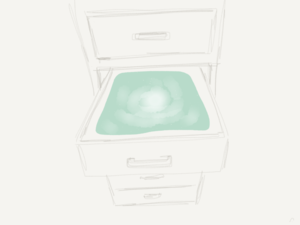