For the Appropriation Within Digital Worlds class I have done several small projects instead of a big one, and chose a main one to present at the Summaery. Here I present some documentation on each project separately by name.

This is a project originated from a personal experience of being powerless over identity appropriation online. When I was still living in Brazil for a several months (around 5 months) I had struggled with trying to control fake Tinder profiles that appropriated my identity by using photos and personal information. Whenever the fakes where reported, the profiles were brought down by Tinder, but after a while a new one would be made. I have made two different police reports in this case but nothing could be done about it. 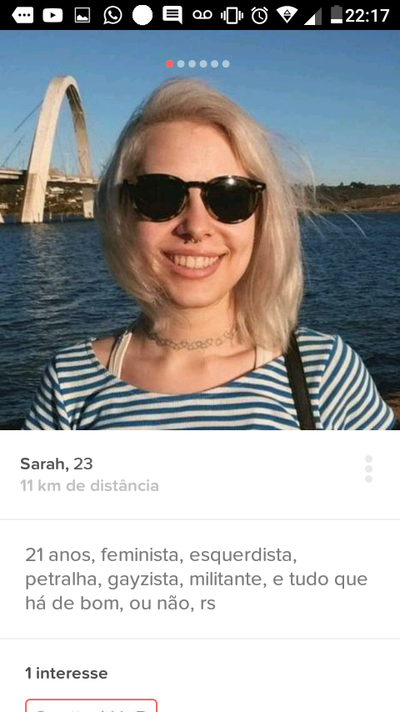 Since I could not reclaim my own image on Tinder, perhaps I could appropriate the image of myself as a fake and exaggerate it to the point that I can discredit my image on Tinder.

The proposition is to make several Tinder fakes using prints of the original Tinder fake as photos. I have made one test profile and changed the GPS[[GPS|Global Positioning System]] location to simulate being at my hometown. With the use of a scrip I enabled automatic like on everyone on the Tinderweb app. Initially I intended on continuing this project by trying to develop a chatbot to respond to any matches made, but due to the time available and no prior experience with this, it was not viable. The test profile was reported and the account is now blocked. 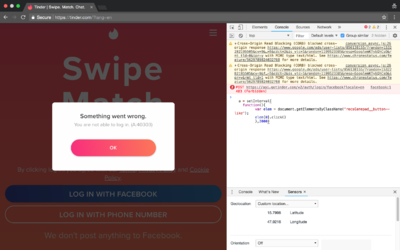 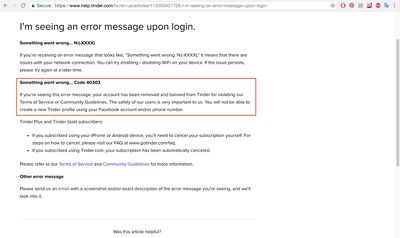 Source of the script for automatic liking [1]

Inspired by Youtube videos and a admiration with the game The Mountain by David O'Reilly, I wished to appropriated and insert myself in gamer youtube culture by making a game-play video of The Mountain. Several game-play videos were made when the game was released (2014) but all of them expecting the game to work as usual games do. After playing the game for quite a while, it is very clear that, if The Mountain can even be called a game, to play it is to live with your mountain and not to actively accomplish anything besides companionship and the perception of the mountain as an (existential, maybe a bit depressed) human relatable storyline. For this reason I believe that a game-play video should be adapted to fit the game, a game that is not played but lived. I made a setup for recording the game-play with the visual reference of Pew-Die-Pie, in which he records in a corner of the screen a live of himself playing. Instead of recording audios of myself speaking and narrating the game as it is usually done, I mimic the mountain and added a text window where I could share my personal thoughts the same as it does.

To watch this video is to accompany the Mountain living it’s life and sharing some of its thoughts, while I, as the player, do the same.

After several hours of game-play recorded the end result is a 3 hours video of continuously game-play of the Mountain with live video-audio recording of myself with a texts comments. This video was uploaded to Youtube but was instantly blocked worldwide for infringing several copyrights for the music playing in the background during the recording. 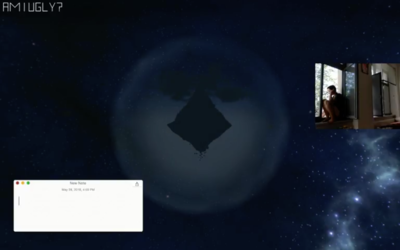 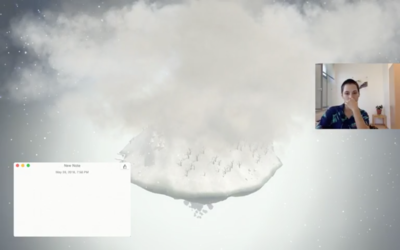 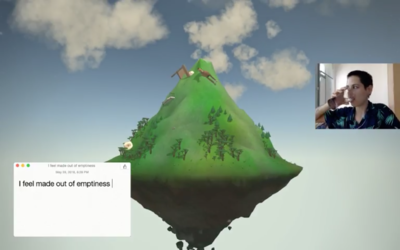 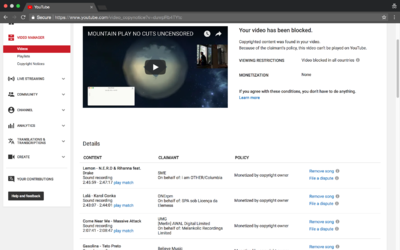 This posters series was made after the I'm The Mountain video was blocked by copyright infringement on Youtube. It's origin is the questioning of how can one not change a music to the point it would be considered a remix and yet make it unidentifiable by copyright detection programs. Is it possible to make it unrecognizable to computers but not to humans?

This is a poster series that uses the most iconic parts of lyrics from Top 500 Greatest Musics list by Rolling Stone Magazine with the ZXX font designed to work as CAPTCHA. As soon as you know it/learn how to read it, can you still listen to the content in your mind? Is it the same? Only the Famous Song 1 was printed, in Riso, and left to be taken for free during summaery. 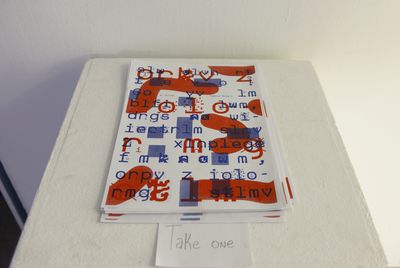 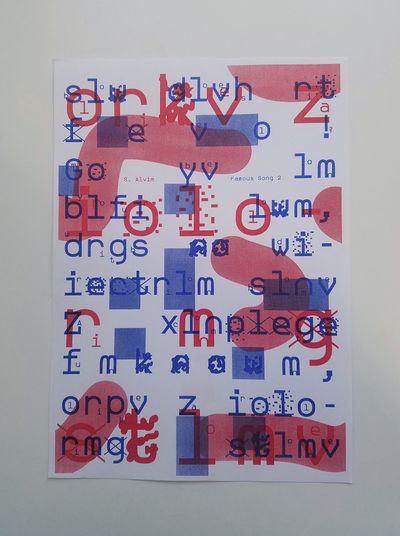 NotMineNotHere is about playing around with appropriation by using data from one platform in a different social media it was not made for. A instagram account that only posts printscreens of youtube videos was made, but the NotMineNotHere concept can be expanded to work in several different medias. 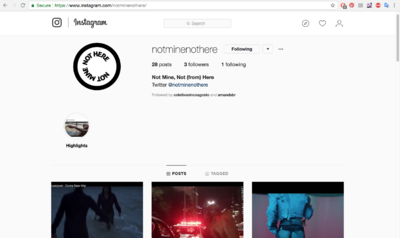 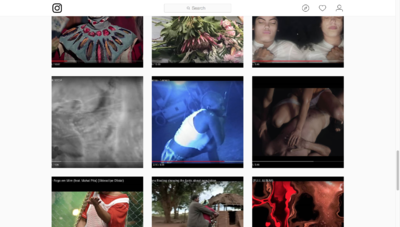 This was the main piece for the semester and the one exhibited during the summaery. The initial idea was to repeat a movie scene so many times that it becomes true to the performer, it has actually been lived and felt in his life. This scene loop was based on GIFs, but what started as a reference became the subject for the project. This piece is a video collage of four different GIF performances. The duration is about 1 hour with each performance varying between 13 to 15 minutes.

A series of GIFs are performed over and over again in a scene-loop for a predetermined time. Gifs represent what you feel and act, you act and feel what they represent.

The video collage (GIFLife.mov) can be a project by itself, but in GIFLife (the interactive piece) it is adapted to function also as a clickbait to take photos and collect comments from viewers. The performances were set to play one after the other in a app interface made with Max MSP. On this interface there was the possibility to "like", "dislike" or comment on the piece. Whenever a viewer interacted, the interaction was saved together with a picture of the person. Although there was a written disclaimer about data and photo being collected, most people seem to be unaware that their photo or input is being saved since there is no webcam display on the interface or any kind of feedback such as sound or pop-up window. 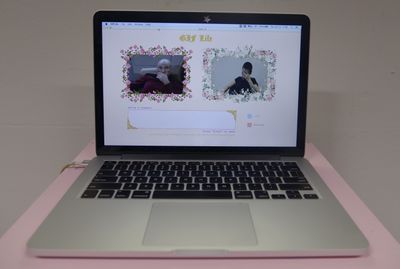 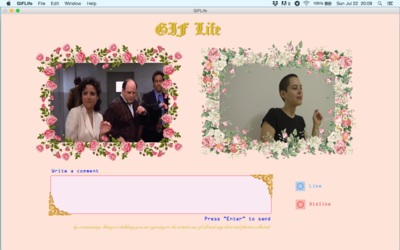 Whenever someone likes, dislikes or comments on the interactive piece "GIFLife" a photo is taken and saved together with the input. User.jpg is the data collected. Read the comments, no one is anonymous.

This data and image appropriation came to me for actually being more interested in people's reaction than on my own content, a sort of easily observable behaviour in social media. I wished to shift the attention from my work to people's interaction. This idea itself might be an appropriation of Marcia X's performance and installation "Exposição de Ícones de Gênero Humano". Marcia's piece was a 2 day installation. In the first day there was a vernissage in which she performed as herself around people while there were video and photo recordings being made of the vernissage. On the second day the gallery opened exhibiting the products from the night before. If Marcia's intent was to bring focus to the social artistic scene and ritual of vernissages, mine is to bring focus to the interactions we have gotten used to in social media. I believe this is relevant as well to the artistic context considering the insertion of artists in these mediums as a way to publicise their art. The relation between artist and viewer has become more approachable and in this context ceased to be a specific ritual with it's own social code, such as vernissages, and adopts the same platform and behaviour as any other personal social media profile. This lack of difference between normal everyday social interaction and artist-viewer interaction becomes even more interesting when it brings up the question of what is art. When art is showcased in the same space and way, is produced and uses the same medium, is the same theme and aesthetic as any other thing in the internet and it is not presented at a gallery, can we really tell the difference between art and… Anything else?

The images captured were color printed in A4 paper, photo above the comment and pinned to the wall by the side of the GIFLife installation.

Photos removed from wiki due to complaints

Is any repetition an art performance? [5]

If I do ever decide to proceed with this work I am aware of many things that could have been done differently or even errors I had not noticed before, the summaery exhibition helped to point out several of them. These are notes for myself that I believe are important to be acknowledged.

i) Add a feedback that the comment, like or dislike has been received because people kept taking several photos without knowing if it was working or not.

ii) Consider a lot more how the installation should be done. I would have liked to go with a overboard virtual-kirsch, make it a real life internet ambient. I like the aesthetic, I believe it fits the subject and if GIFLife is a bait to attract people to interact, being discreet might work but is not the only way. Flamboyant flowers exists to attract insects.

iii) The text saved needs a margin because long comments were being cut.

iv) I should have also worked on the visuals for the texts, photos and prints for User.jpg so it would visually match the identity of GIFLife.

v) Lighting is so important. The light for photos was way too bright and focused and the printed images were way too dark and hidden by the lack of adequate lighting. 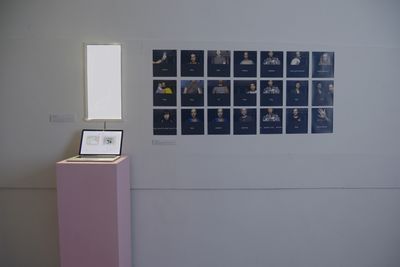 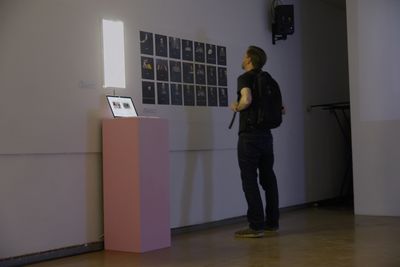