We want to develop an Interactive Artwork which captures the dominating clothing pattern of the wearers, then replicates and projects it back into the space, camouflaging the dominant wearer and engulfing all others in the pattern. The viewer can then enter the Installation and, using hand movements, erase the mapping, revealing the dominant wearer. This artwork connects to a sense of identity and awareness of digital trace, correspondingly relating to the physical world of clothing choices and decisions around making yourself visible. 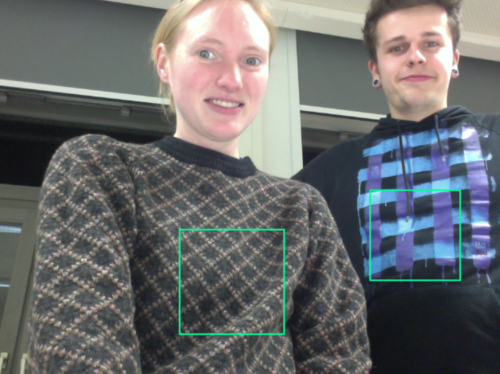 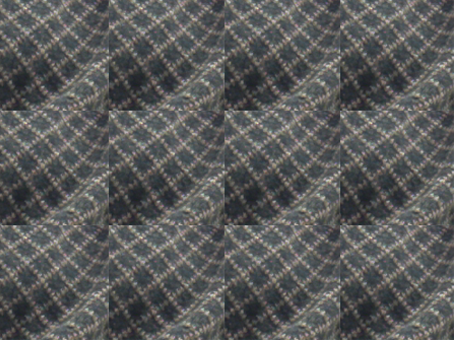 One hour required for set-up. The performance will run throughout. Approx 10m^2 of space needed, as dark as possible. (Could also be portable with catering cart).

Initial Working Code Can be found here And here

The idea behind the code 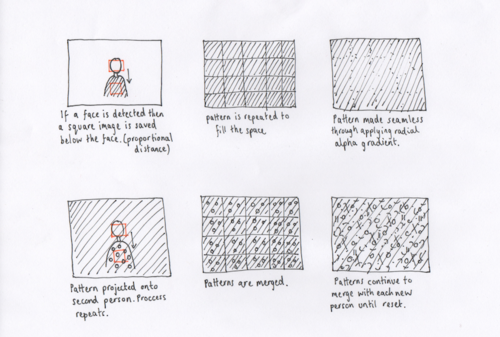 After initial testing, the decision was made to take out the 'erasing' feature as it felt unnecessary and unintuitive. Instead, we decided to double the installation, creating the opportunity for two people to interact simultaneously. Now, the pattern of one person is projected onto the other and vice versa.

Patterns at various stages of merging. There are also instances of 'non-faces' being detected and therefore adding unexpected images into the mix. 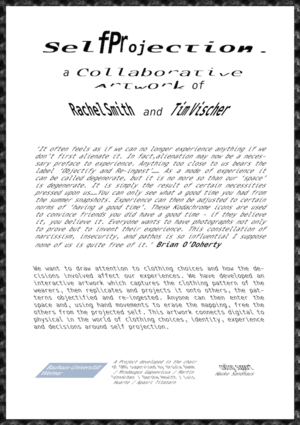 ‘It often feels as if we can no longer experience anything if we don’t first alienate it. In fact,alienation may now be a necessary preface to experience. Anything too close to us bears the label ‘Objectify and Re-ingest’…… As a mode of experience it can be called degenerate, but it is no more so than our ‘space’ is degenerate. It is simply the result of certain necessities pressed upon us……You can only see what a good time you had from the summer snapshots. Experience can then be adjusted to certain norms of ‘having a good time’. These Kodachrome icons are used to convince friends you did have a good time - if they believe it, you believe it. Everyone wants to have photographs not only to prove but to invent their experience. This constellation of narcissism, insecurity, and pathos is so influential I suppose none of us is quite free of it.’ Brian O’Doherty

We want to draw attention to clothing choices and how the decisions involved affect our experiences. We have developed an interactive artwork which captures the clothing pattern of the wearers, then replicates and projects it onto others, the patterns objectified and re-ingested. Anyone can then enter the space and, using hand movements to erase the mapping, free the others from the projected self. This artwork connects digital to physical in the world of clothing choices, identity, experience and decisions around self projection.