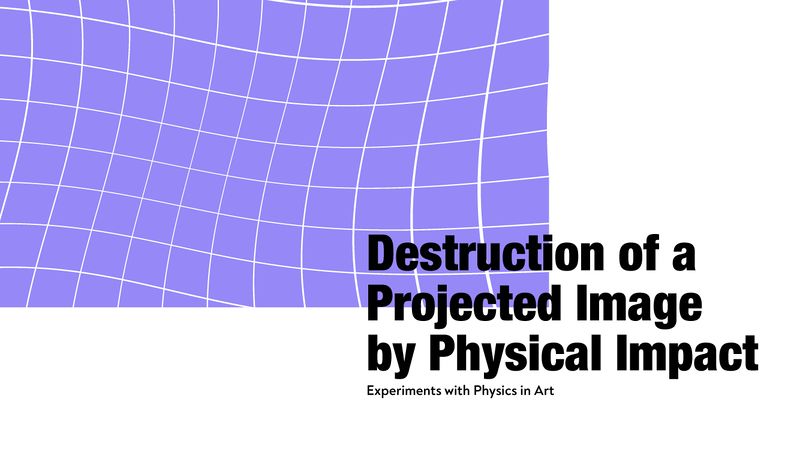 At first this project should have been about “Perception of Time”. We live in an age where time appears to have become more precious, yet everything has to be at a faster pace. This is not just for the last few years, but since the beginning of the industrialisation. In big cities, but also in the digital world you see most of the people rushing. On the internet, for instance, videos become shorter, because people often don’t want to take the time to watch much longer content anymore.

In the later experiments this concept broke down to abstract experiments with physics, which turned out to be more captivating than the preliminary idea. A clear image/sequence is projected on the wall that is moving slowly or even static. The more crowded a room becomes the more turbulent the video will turn and eventually end up in an abstract waveform that is separated in the colour spectrum of the projector. It can be seen as a physical destruction of the light or the digital image. At the same time, the speaker that brings the mirror to vibrate becomes louder and more tense and eventually ends up in a wild and tempestuous soundscape.

In my first experiment I stumbled upon an effect that was created by a mirror film reflecting a white logo projected on it. Then the image was distorted, almost shattered by a speaker that was vibrating the mirror film.

To make the image clearer, for the next experiments static mirrors were used. These were vibrated by an audio exciter, which is a speaker that is resonating a solid material to create sound, that is attached to the backside mirror. To get the best out of it, different materials were tested with different speakers and different projectors.

Clear image, but did not vibrate strong enough.

Blurry image and did not vibrate strong enough.

Clear image, but did not vibrate strong enough. 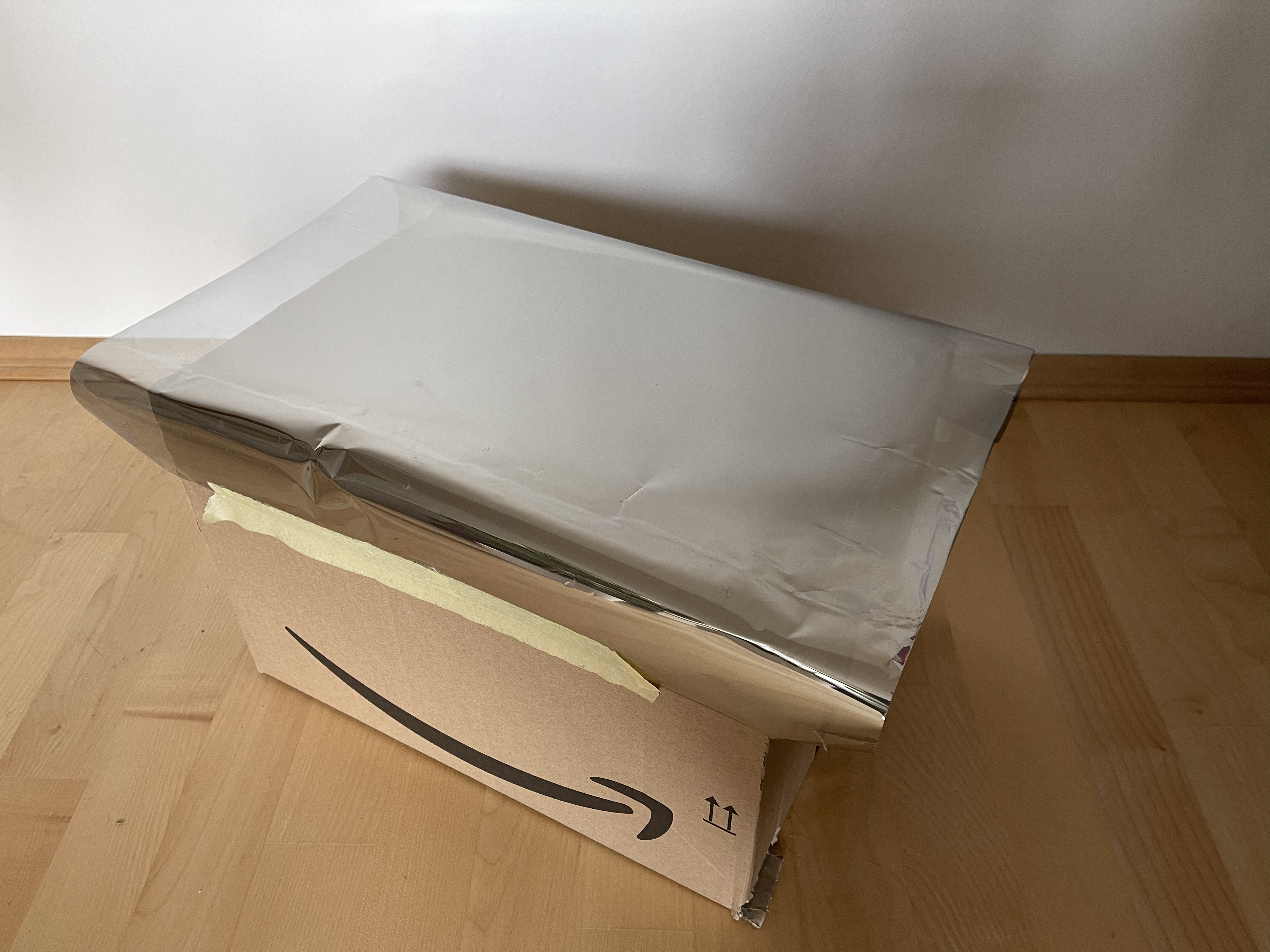 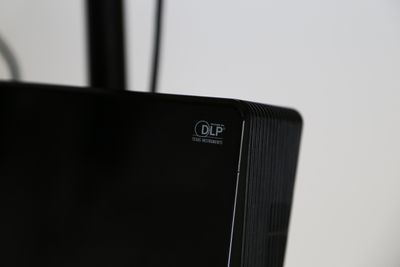 Unless a LEDLight-emitting diode or LCD projector, a DLP projector uses a color wheel that spins in a RGBW pattern, so fast, that the human eye thinks it’s seeing a distinct image. This technology allows to break up the colours of the projected light. 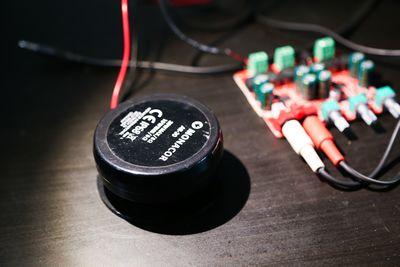 An exiter is a speaker that needs to be used on solid surfaces to resonate them. Cannot be used with mirror film, so it is not being used in this project 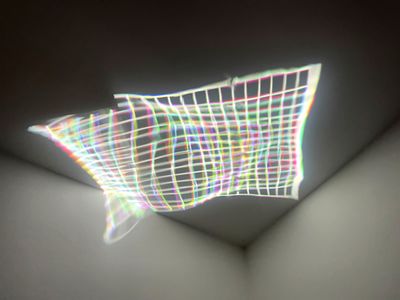 Result with DLP Projector and Mirror

Not only the projection, but the contraption will be a sculpture on it’s own. In the next step I will try to convert the speaker in the box to just a flat surface of mirror film, that is hanging in the room. I will try to build a speaker and use the foil as a membrane, so that it vibrates itself. The projected image will be a totally abstract, the distortion of the grid in this case looks very organic and the lines blur into one another the stronger the trigger becomes.

To trigger the installation, three ways are compared and then the best and easiest will be used.

The first one is a WiFi-Device-Counter, that can detect how many devices like smartphones are located in a room. This way of counting people could back the idea of people diving deeply into the digital world where everything is overly fast paced. I tried it, it worked fairly well, but I soon understood that it would either be misunderstood or not recognised at all without additional explanation. 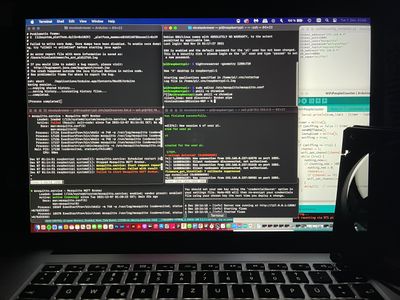 In the second approach to trigger the installation, transducers installed underneath a second floor would be an option. These could be used for example to capture the vibration, that can easily be converted into a vibration on the speaker again. For capturing, multiple cheap piezos could be used as contact microphones. This option might be too bulky and is more difficult to install. 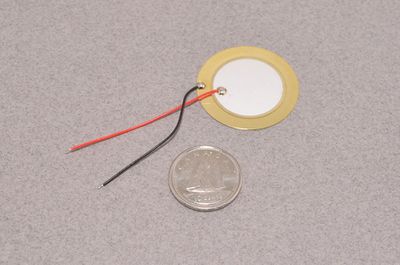 Noise in the room

The easiest to install and perhaps the most obvious way is to install microphones all over the room and measuring the amplitude of those. With these data the amplitude of a low frequency sine wave can be controlled and eventually regulates the strength of the vibration of the mirror. 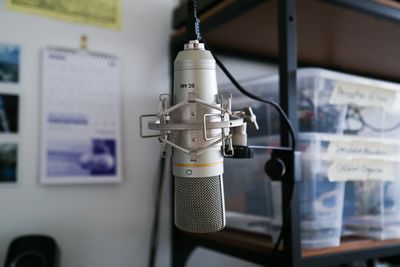 This code is generating the projected image, capturing the amplitude of the microphone and playing the sound to the speaker. 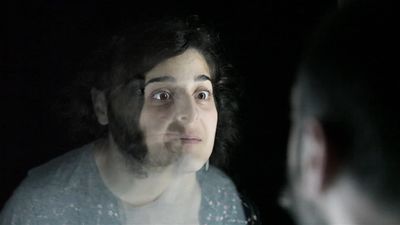 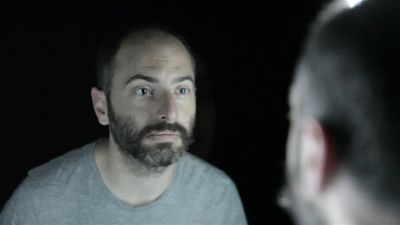 “ALTER EGO is an experimental setting, questioning and aiming to visualize the mental and mimetic interrelationship between two dialogue partners. It is a participatory work that uses stroboscopic light and a special glas[...]” 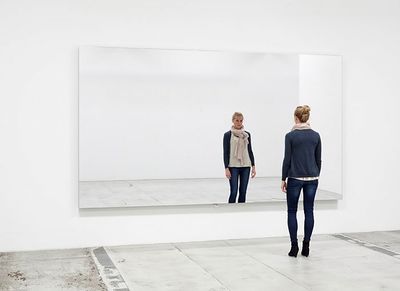 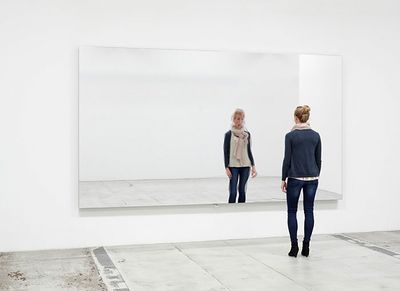 A large mirror film mounted to a wall begins to vibrate in the motion of waves. The mirror reflects a different distorted image of yourself and the room you are in. It creates a feeling of dizziness.

Reflection and distortion of colour 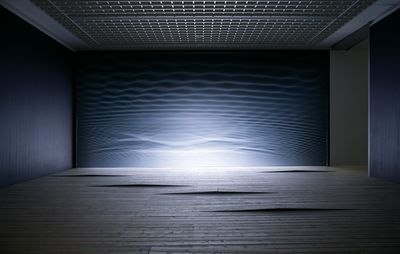 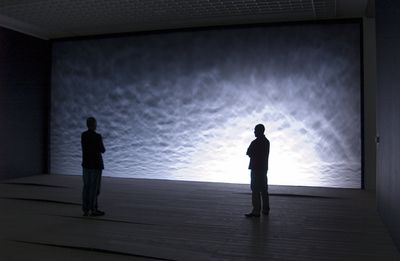 He was inspired by vibration and wave patterns created by the viewers. Light is reflected from water to a wall. In the floor there are pedals that create waves in the water/the reflection. 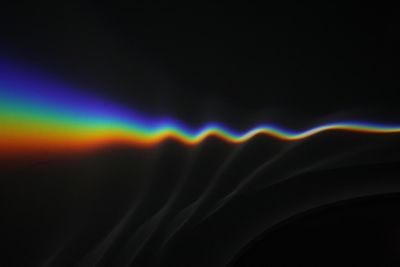 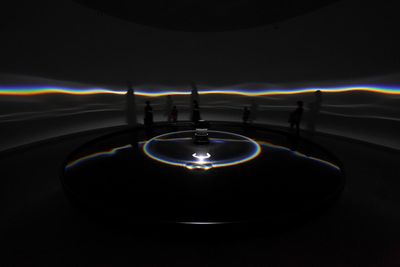 A spotlight is pointing on a prism that seperates the colours of the spectrum, which are reflected from a circular pool of water onto the wall. Pedals on the floor are connected to the pool. 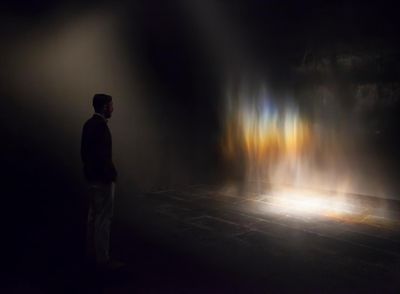 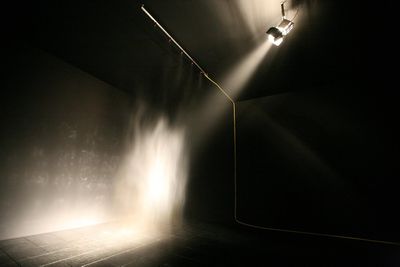 A spotlight is shining on artificial mist. Depending on the perspective the viewer can observe the light spectrum reflected by the tiny water droplets.

In The Vanishing Point UVA uses perspective as a tool to reshape and redefine a space to create an illusion of light as a physical material.

E.A.T.: Experiments in Art and Technology

The aim is to reduce the installation to just the mirror film and the projection.