During the course Human Centered Design we conducted an exploratory user study to find out about the acquaintance of Creative Commons, potential pitfalls and caveats of its usage. Our probands were selected from students of the Bauhaus University Weimar from courses of studies ranging from Media Arts & Design over Visual Communication to Product Design aged between 20 and 28 years. All of them were selected for their unawareness of local copyright jurisdiction and licensing models (e.g. CC). The short interviews took place in their personal environment during the activity of publishing original content on their personal (micro)blogging platforms. In advance our group defined the basic premise of identifying the users motivation of publishing their works in the web. After each interview we presented the participants with the concept of Creative Commons and introduced them to the website and the function of choosing their own fitting license.

One participant gladly allowed us to publish the complete interview which you can download here: (German language) 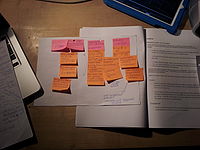 Example assessment of an interview

Each interview has then been assessed by our group to identify the following problems, motivations and activities.

One of the major problems we identified was inherent to our target group selection, which is the unawareness of Creative Commons. Most users did not know the full dimension of the rights they hold of their work and along with these how they restrict the usage of it to interested parties.

After the introction to the Creative Commons licenses and its concept most users were quite interested in using them, but as we found out were struggling how to continue from there. Some participants were not familiar with HTML[[HTML|Hypertext Markup Language]] and had no idea how to tag their content properly with their chosen CC license.

We identified the following Motivations and Goals of users

Before the knowledge of CC the users goals consisted of their wish to publish their project work to their models they worked with, friends and potential clients as an impromptu portfolio.

After the introduction to CC all of them were interested in opening parts of their work to the commons and using a less restrictive license.

We identified the following important acitvities

What is the essence of this solution?

We propose a software solution which is capable of identifying potential users who would be interested in CC and would benefit from it. This process should intercept at a strategically important point in the workflow of the user, for example right after a finished image upload to a website.

Why are current solutions unable to support users in this?

To address this problem domain usually campaigning through advertisements comes to mind. In contrast, our idea addresses only creative users who already participate in some sort of sharing. Furthermore, we pursue the goal of communicating with the user when his attention is focused on his personal sharing activity.

What is the essence of this solution?

A piece of software which eases the access to the Creative Commons license generator with the capability of storing a default chosen license. It is a one click solution for tagging content he shares on websites without the need for the user to know HTML[[HTML|Hypertext Markup Language]] or Markdown.

Why are current solutions unable to support users in this?

We know of no current solution which addresses this usage scenario. Not all users are already familiar with a workflow using tabbed browsing to access the information on creativecommons.org and know how to properly tag their content.

We propose a small browser addon which either asks the user of his sharing habits or analyses the history in a way to identify potential users who already publish their work in the web. If the user is a candidate the software would display a teasing comment if he knows about Creative Commons after which he can choose to be never bothered again or get a brief introduction about it. As soon as the software is aware that the user knows about CC it would provide an unobstrusive button on the navigation toolbar acting as a small license selector and manager.

First idea: Thinking about something that fits the existing workflow is good. Of course, there’s two sides of the equation: the user/remixer, and the creator/owner. Your educator idea hits the user/remixer. How can you extend it so that it can also be used from the side of the creator?

Thought experiment: if imgur or Vimeo deploys an educator, what would it look like?

Second idea: There’s a bit of a ‘preaching to the choir’ quality going on here. People who care about CC will look up and install the manager out of active curiosity, but people who don’t care might not be interested enough to find and install license manager in the first place.

How would you build the manager in such a way that those who don’t know about CC will want to use it actively?