An H-Bridge is a circuit of 4 switches allowing to select the direction of current flowing through a part. The simplest H-Bridge consists of four manually controlled switches. The name is derived from the circuit diagram which looks like a capital H.

When using an H-Bridge it is important to prevent switches to short circuit the supply voltage. In a few H-bridge designs additional circuitry prevents accidental short circuits, but most available chips don't have this protection. 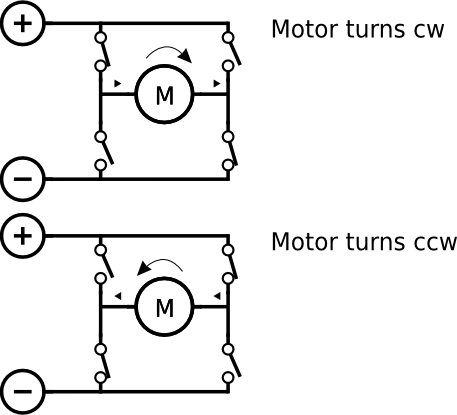 Often "Half-bridges" are used where you'd expect an H-Bridge. They are almost the same - but only the left (or right) part of the Bridge is already connected. (2 switches in series with their middle as output. Out of two half-bridges you can build an H-Bridge (also often referred to as Full-Bridge).

L293D quad half-bridge: one of the cheapest part to build one or two H-Bridges. Has built in diodes, comes in a standard DIPDual Inline Package. An IC which comes in DIP package has 2 rows of contacts. [[Wikipedia:Dual in-line package]] package: conveniently useable in a Breadboard. 600 mA continuous current.

SN754410: built in free wheeling diodes, DIPDual Inline Package. An IC which comes in DIP package has 2 rows of contacts. [[Wikipedia:Dual in-line package]] package - very similar to the L293D but more power (1.1A per channel) and allowed pwm frequencies are higher. According to its dataseheet the SN754410 is usable as a replacement for the L293. (even better).