For my Soundwalk i developed small boxes wich are reacting via Photocells on warmth and light of the Person carrying it and the environment in different forms of sound. 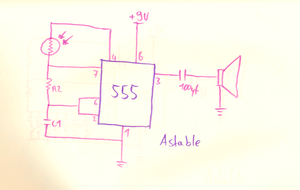 For the soundwalk itself we went into the park because of the different kinds of lightning situations. The boxes were given each to a group of person to share and talk about the experience between them, every 5 minutes they exchanged the different boxes.

For my final assignment i wanted to build an ironic and not that much controlable instrument, an Unstrument. Therefore a build an big fan wich pushes a ball in the air and lets him fall if he reaches an specific height. This creates different sounds and feedbacks via several LM 365 op-amps connected to piezo contactmicrophones. You can control the outcome by using an multiswitch panel on the backside of the fan. To create an optical illusion and some nice visual between the turning airscrew and Light i installed Led´s around the hole bottom of the fan corpus wich were operated via an circuit using the LM 4017 and an 555 Timer you can control the speed of blinking at the back panel through an potentiometer.