It is obvious we come from a natural world for artificial purposes. We have come from earth to create fiction, to imagine the future, sense our present and decide our past. In order to feel connected with the world we touch things, but a device as simple as gloves may change our mind very easily about our perception of the world. We are no longer satisfied with the world we are living in, this is why we are always looking a way to enhance our senses. Fiction then becomes real, technology becomes natural and we end up forgetting how unexpected nature can be. We have will, we have freedom, do we choose technology or nature? Either way we always end up lost in our beliefs and in our own fiction.

Create two devices (gloves) that will develop an idea of fiction in people through the enhancement of their senses. Our first idea was to build two devices with different materials, one would be made out of branches and the other one would be made out of metal. We started by building the metal glove first, as we were getting the materials and shaping it, we showed it to some people and it was very interesting to see the way they were reacting to it. Each time someone tried them, they became a different person.

At the same time in "The Unstrument" seminar, we were introduce to many ideas and many circuits related to sound. We started playing with speakers and with a small research on resonance through the body, we decided it would be great to place a speaker on the palm part of the glove. 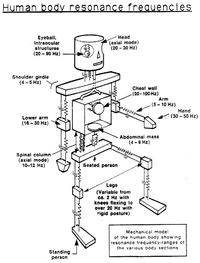 We were introduced to the 555 timer chip. Two circuits were created out of it, one was the timer and the other was the modulation. We included photocells or light sensors to make sound react to light. When we tried this on the speaker we realized it was truly amazing how the speaker made sounds that would show us the movement of our hands, the sound changed also according to the position of the hand, not only the light.

We needed one input and one output for the two hands. One hand was going to be the metal one and the other one a textile glove holding the speaker. Metal is a conductive material, this is why we decided to place LEDLight-emitting diode's on the fingertips so the photocells in the textile hand would react to the light in a more accurate way. 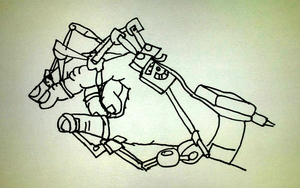 For the other pair of gloves we decided to build them also with similar materials, metal and textile. This way we were going to see the reaction of people and their decision making process by having two similar devices doing different things.

The second metal hand was going to have a different aesthetic. We were looking for something created out of raw materials, metal wire. First we shaped the wire into tube forms to then have the shape of a finger, the rest of the hand followed the same process. We incorporated piezo elements in each one of the fingertips of the hand, it made sense for the rounded end of each finger showed us the path to each piezo element. The wires connected to the piezos looked like the veins of the hand.

For both pair of gloves we wanted to show what we were doing, the circuits, the cables were there for people to see. We wanted people to create their own fictional story about the gloves, that is why we decided not to hide anything.

We were given some ideas about gloves made through history... an interpretation of what the future looked like in the past, in the 80's to be more precise. This inputs lead us to think of what were we trying to accomplish through the incorporation of electronics into the gloves. We wanted something simple and at the same time, something sort of deceiving. Our story, our fiction, was going to be the expectancy of future in our hands... the gloves. 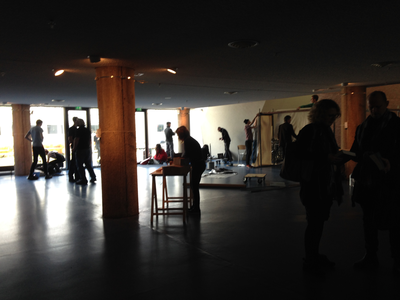 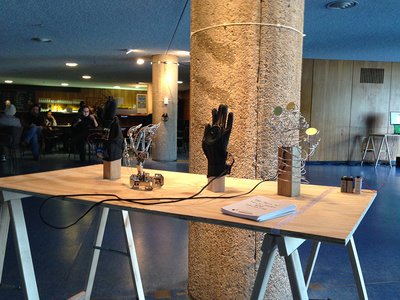 For this assignment I tried to imagine how would it look like music inside a skull. That lead me to thing of the perception of resonance through different parts of the body. I found a very nice image explaining how many herz we can feel and since I was listening to David's Bowie new album... I decided to place my headphones in different parts of my body. This was a new experience for me and in a further future I would like to explore this idea better.

By building this circuit I understood better the inners of a speaker, we broke one speaker down and my goal was to play with the magnet but I did not succeed a lot. Instead we had fun playing with the time and echo of sound by placing different elements on top of the speakers. 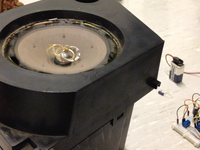 Video with 555 chip and speaker

My sound walk had as a main idea to represent the movements of animals going through stereotypic behavior. This kind of behavior happens when an animal is kept in captivity and it is not given the proper kind of stimulation, it feels bored and starts repeating a single movement in or through the same space. This behavior can also be experienced by humans, when you see somebody hitting the table with his feet or just moving the leg constantly he is showing an stereotypical behavior.

I wanted to try this idea in my sound walk. It was divided into two stages: First: The inside of the Hauptgebäude from Bauhaus Weimar Uni. I made people go up and down the stairs for at least three times and then just walk around in circles in the top part of the building. Second: Go outside and again walk in circles. I though of an outdoors space for I wanted people to experience different sounds in the same area.

Erin taught us a really cool circuit. The circuit was built, we had to weld the piezo element and that was a really hard task for me... I almost burnt the whole piezo element...

We were given the idea of listening to everything that surrounds us. Listen to the table, the walls, boxes, your body.. the everything. This triggered many interesting ideas and once we were introduced to creating feedback the results were even more interesting and fun. We tried to create a feedback symphony with all the participants of the class.