Documentation of projects from the class Space is the Place by Max Neupert in the winter semester 2009/2010:

Hamish John Appleby: DREAMS IN INNER SPACE AND THE FRONTIER OF THE VOID 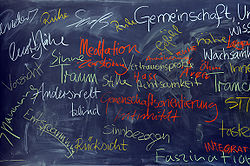 DREAMS IN SPACE, BLINDFOLDED AND BOUNDLESS - A workshop by: Hamish John Appleby

THE PROCESS '“The visions we offer our children shape the future. It matters what those visions are. Often they become self-fulfilling prophecies. Dreams are maps” Carl Sagan, 1994.'

WHERE AND WHAT I am currently running a creative workshop with the students from the Waldorfschule in Weimar – So far this has been a fantastic opportunity for both myself and the students(I hope) to engage in a workshop or kind of ‘mini project’ that they have probably never encountered before, with the outcome being a possible mini exhibition of drawings – or other creations.

A GREAT QUOTE “I shut my eyes in order to see”. --Paul Gauguin

Since more than 100 years humankind uses technology for broardcasting content and for some physics reasons nearly 80% of that signals are just “lost” in space. That means the nearby outer space (100 ly orbit) is in a way a kind of radioarchive or a cultural documentation of hunmankinds ability to send signals with several technologies. I'm focused on the frequency band of ultra short wave radio signals. To explain this cosmic-international radioarchive, I want to create a navigationplan to "travel" through that archive. the installation will be a (selfmade) telescopebody (no tech inside) that can be moved in different directions to zoom into a model of that “radio-halo”. The room, where the telescope will be placed, is prepaired with some small radiotransmitters (selfmade) to symbolize where some particularly broadcasts are “waving” in outer space. Inside that telescopebody will be some, i think maybe three, radioreceivers to get in contact with the transmitters and by moving that telescopebody the recipient can adjust the programm that sounds in the body of the telescope (sorry for my bad english).

Kyd Campbell: In the direction of the frontier 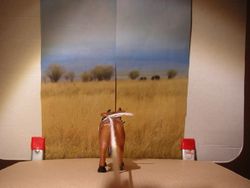 video maquette (pretend the cow is a pony)

The goal of this project is to produce a machine for self video recording and capturing alternate states of movement. The image will include a subject moving into the distance. In the image, a large rope, visibly attached to the camera point will lead towards the subject, as it is pulling the camera, filming itself. I constructed a specialized camera mount for holding and stabilising the camera on a rope. The subject is instructed to pull on the rope. Currently, the rope is tied to a fixed point. 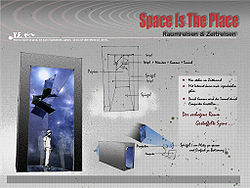 Idea: Zeittunnel - “Space is The Place” 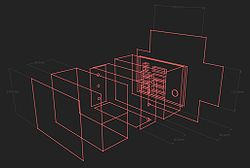 This work began by following a project sponsored by the National Space Biomedical Research Institute. Vanessa Cardui larvae that flew aboard the Space Shuttle Atlantis to the ISS, was also an educational project that encouraged students to take part by creating their own habitats to watch life cycles over the course of aprox. 25 days. Through a process of observation and isolation, both habitats (one on earth and one in space, and the variable being gravity) would attempt to contain life in order to speculate how knowledge gained might apply to humans (and life as a living system) travelling in space and time through the solar system. Might this also effect, mediate and transform life on earth?

Images were taken every 30 minutes during daylight hours, transmitted to the web and captured here as one large chrono-sequential print. 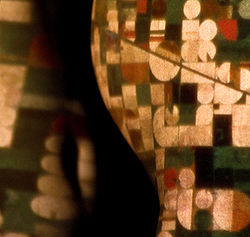 VOYAGEO consists of projections of satellite pictures onto the human body. These pictures are not about act photography, but about the recognition of earth and the human body. Mankind has a high selfconfidence about itself and its reign on earth but still is not really selfaware. We are trying to produce thus selfconsciousness by showing not the beauty showed in today's media. We want to have a look on the everyday reality of body and earth. 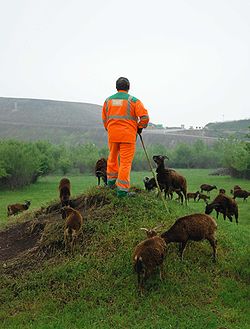 Infinity is the topic of art works and theoretical essays. During the Romantic Caspar David Friedrich tried to visualize the feeling of infinity in his drawings. Superiority.

The moebius strip is a visual explanation of infinity and today used as a symbol in our everyday life. It represents a circuit and also the idea of repetition, with no beginning and no end. The best known moebius strip in our daily routine is the symbol of recycling circulation.

In my work I am focusing on the current problem of disposal sites in Germany and its use. Focusing on the topic 'Space is the place', I endeavor significant towards the Erfurt-Schwerborn disposal site which has witnessed radical changes over the past 5 years.

Der Müllmann represents conceptual and visual the idea of circulation; the before and after - the idea of infinity. 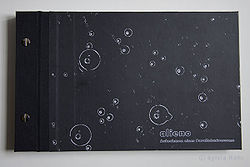 The plan was to produce artificial space pictures that are made by pure photography and montage. Different materials, objects, gases and liquid mixtures - directly shot or shot through a microscope with short and long exposure time - built the basis and got later arranged to those space pics.

During the work hundrets of hubble pics and images in books (e.g. Mackowiak, Bernhard. Planeten, Sterne, Universum. Naumann & Göebel Verlagsgesellschaft mbH, Köln, ISBN 3625121417) inspired us. It is impressive how totally different the look of those images can be (real-looking, like drawn, false colored etc.)

Bianka Langnickel: aren't we all aliens? 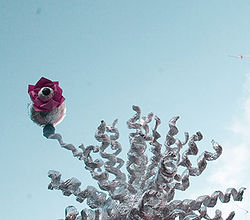 Bookproject. For me space is in general is a very undefined place. As I think it encourage everybody to use their whole imagination and creativity I will use this unknown area to create my own place, figures and spacey environments. I am going to make an illustrated book for children which consists of these imaginary protagonists and will lead them to an abstract way of creating their own playground. the book will give them the opportunity to reconstruct the creatures by themselves and learn how to create their own „aliens“. When the child is interacting with the object playing a part in the story it‘s more easy for them to get a connection between the actual sense of making up something in addition to the creative process. they can use the „aliens“ they build before to make up further stories and play them within their family. In the end their will be a book which provides a inter-social way of reading, listening, building and a wide range of playing effects on little children as much as on adults. It is „talking“ to different senses and invites everybody to join who loves to see the world and especially the space more open minded and in a creatively way of thinking about “out there”.

Captain Rock'it and the Sound of Stars

Imagine the universe's infinite emptiness, a place where absolute silence rules. We want to fill this space symbolical and to give the innumerably stars a special sound. In interaction between the user with the stars and the stars among themselves, there will be different sounds create. They will picture a musically portrait of the universe. 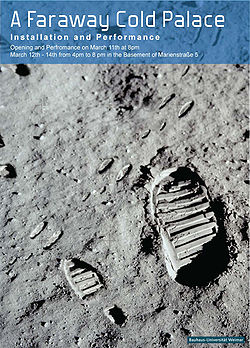 The moon has come into focus again in the great Space race. It has been forty years since Neil Armstrong landed on the moon, now after the recent discovery of water on the moon a new interest has been sparked about finally heading back. In this new moon race has new contenders, the US and Russia are no longer in the lead. By 2015 it might be a Chinese man to be the next to step foot on the moon.

We conceptualize our project around dissolving the western ideals and myths about the moon and working with Chinese mythology and symbolism as our focus. Our concept of the moon stems from the three Chinese moon myths the story of Chang'e 嫦娥, Wu Gang吴刚 , and the Jade Rabbit 玉兔. These three myths revolve around a mystical laurel tree that grows on the moon. 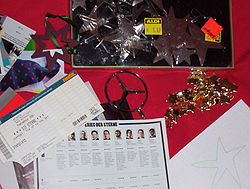 We took the stars from the sky. They are used by us. You can find them in logos, distinctions, decorations, jewelery, names, pictures and many other uses. Have a look at our own starry sky.

Find out more about the project. 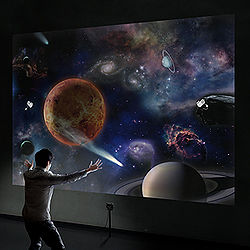 Virtual Solar System is an innovative 3D online platform. Through this you will not only learn the structure and context of the solar system, but also a fantastic space that can be experienced through simple interactive body movements. When the user visited this platform, the hand movements of user will recorded by the camera as commands. Once the system has found a projector connection, this platform is switched into the "astronaut mode", in this mode you can move in front of the screen free by own hands and feet in order to feel the spectacular of the spacewalk. Each user can even set up their own celestial bodies and share online.