Interaction with the Awkward


an installation by Amel Ali-Bey


Transitory places such as parking lots, malls and train stations are defined by their functionality. Living in an urban environment we become familiar with these artificial places in our daily lives. We can read the monotonous and repetitive structures of supermarkets or the temporary signifiers and iconography of public transportation. Theses non-places can become even more usual for us than natural spaces as untouched landscapes mostly in accordance with standardizations of size, light, smell, sound and interaction. Likewise, if we analyze public recreational areas such as parks or other green areas they have one attribute in common: artificial light.

I‘m interested in investigating forms where artificiality and nature create a crossover. With this in mind I want to install an object that can be seen as a manipulative intervention in public space. An installation in which the beholder activates the function of the object with their presence. Rather than using actual light I am working with the sound of light to create an environment and mood without actually using just another artificial light. The work will be placed in a park with a large open green area so that the artistic intention and displacement can have the most impact and be easily interpreted.

Sound will be sourced from the flickering noise of a fluorescent light and emitted by a speaker hidden inside of the object. 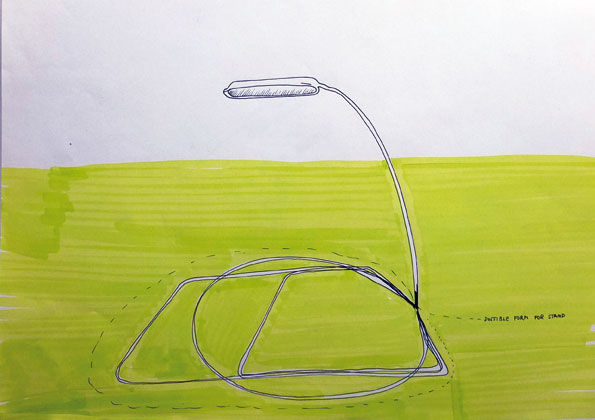