My repo is here.

In the course “Principia Textilica” we explore intersections of computational algorithms and textile craft, including pattern generation algorithms, weaving techniques, knot theory, hands-on experience with textile maschines, history lessons and more. For the final project each student is encouraged to find a subject to implement some of the methods and techniques we see during the course.

I study Computer Science and Media, which means my background is more algorithmic and technical than art-related. Nevertheless, I am familiar with a few textile techniques such as knotting (Macramé), weaving, sewing, felting and embroidery.
For inspiration I look at two topics that have fascinated me for years: Modeling “Living” Things (plants/fungi/insects/animals) and complexity.
Complexity is often mistaken for complicatedness because the result looks complicated. However, most systems that produce complex results are very simple. It consists of a certain number of elements and a few elemantary rules which are applied to those elements.
My goal is to use both, complexity and modeling simple “life”, to create a textile pattern.

I will use a swarm model, which means I have a number of individuals which are controlled by a set of rules concerning themselves, their dynamic environment (e.g. the other members of the swarm) and their static environment (e.g. boundaries of the tank). The metaphor I choose is a school of fish moving around in a pond or glass tank.

The desired pattern will be generated by the movements of the individuals. I want to start with the rules and successively adapt them depending on the outcome.
I do not want to settle for a specific textile technique at this point, but I know I want to assign a thread to each of the individuals. With this premise in mind, favourable textile techniques are embroidery and knotting.

My fish program is in 2D and has two main elements: the tank and the fish.


The tank started out as rectangular, but I find a circle to be more aesthetically pleasing as well as more fitting for an embroidery hoop. The circle embodies the simple inside/outside world that I need.

The basic swarm rules below share some similarities with the “Boids” program by Craig Reynolds[1]. He developed an agent-based algorithm to simulate the flocking behaviour of birds.


There is no randomness in my program. The behaviour of the fish is essentially determined by three basic principles:

as well as two optional principles:

Security
Each (non-predatory) fish will avoid any predators.
Mortality
Each fish can have children. Fish can die of childbirth.

For implementing my idea I use Processing 2.0[2], because I am already familiar with Java. Also Processing is one of the tools we use during the course, so all participants know how to look into my code and adapt it if they want to.


This section will focus more on algorithms and data flow rather than implementation details. There are four ways of running the program represented by the combination of optional mechanisms on top of the basic ones:

It is worth noting that the code still includes all methods and parameters that I do not use for the textile piece or the parameter variations, but I will restrict the explanations to the version I actually use (3. only Mortality). In this version each fish will have two children when it dies. The resulting pattern is made of straight lines connecting parents with their children. The movement of the fish is influenced by all living fish as well as all dead fish. I start with one fish and stop at 6 or 7 generations. 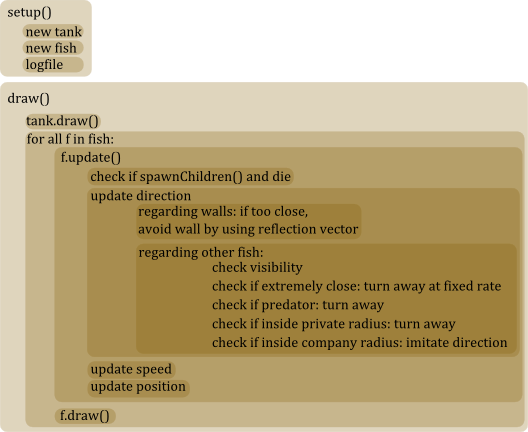 Essential structure of the program

To be able to extract all important positions and values from the program several logging methods are implemented. The program produces a simple text-file, where the parameter values are noted as well as the positions of the fish (original coordinates plus coordinates scaled to fit the textile application), their id and their children. The tank class produces an image where the positions of the fish are noted pixelwise, the image shows their complete movement. I also export an SVG[[HTML#SVG|Scaleable Vector Graphics]]-file with a straight line connecting the end position of each fish with their children. This export can be done with additional text output directly within the SVG[[HTML#SVG|Scaleable Vector Graphics]]-file (the id of each fish above its “grave”).

The text-based log file (example below) consists of all important parameters as well as the coordinates of each fish, g: denotes the generation while c: denotes the ids of its descendents.

There are several more, but some of the most important fish parameters and properties are:

When varying one parameter the others are set to a default value to cleanly separate the effects of the change. The “baseline” setting with all parameters set to default is included in each of the variation series. The natural order of the parameter sizes detemines its placement within the series (ordered by increasing values). The table below shows the used integer values.

The following images show the different outcomes for variations of the parameters. On the left you see the connections between related fish, on the right there are their movement traces (actual paths).

Throughout the whole development of the algorithms and parameter variations I played with several ideas on how to go from digital to textile. The basic idea was to use threads as entities or individuals. However, I was very indecisive about the details. Early ideas included just embroidering the movement of the fish or use the movements to (pseudo-) weave. I also came up with a Macramé-related knotting scheme, that resembled an RPG: each thread could win or lose in a fight against other threads.

None of those concepts are interesting enough for me. All of them have a building or producing element in common, so I tried to turn that element upside down. Working with textiles is usually constructing something. Howerever, there will be steps you have to reverse, because you made a mistake or the material was flawed. You have to untie the knot, unweave your cloth or just untangle the mess. Yet these unwanted destructive processes happen in favor of the final product.

I want to exaggerate the principle of destruction for my textile piece. Still adhering to the threads as individuals it means deconstructing the elements itself: one thread contains other, thinner threads and fibers. The parent-child-relation between the fish in my tank fits in seamlessly with the construction-by-deconstruction-concept. The parent fish contains all the material needed to form the children, which then again contain everything for their children.

I will use a thread and split it up into subthreads, which match the connection between parent and children.

Below is the first part of the used log-file.

For my first practical trial run I use evenweave with approximately 2mm per unit. To limit the size I scale down the computed positions to fit a 100 by 100 grid (resulting in appr. 20cm by 20cm for the finished piece). The yellow thread is used as a counting help.

Because my generations of fish are based on the number 2, I also need thread based on number 2. So I use cotton wool threads each already containing 8 (=2^3) sub-threads when feazed.
To be able to manage the threads and associate them with one fish id I simply attach some paper to the string groups. The positions are directly read from the text in the log file.

Total view of the experiment and details on the back. For 7 generations of fish, each having 2 children I need 2^7 threads (128). Using the 2^3 cotton strings, I need 16 strings in total - which is quite thick. Fitting it through one "grid point" compromises the accuracy of the grid physically, so I will dilute the positions for the first maybe also for the second generation of fish. The starting point for the fish is 50/50. After dividing the thick 16-strings-cord into 4 subcords with 4 strings each, the starting points are 51/50, 49/50, 50/49, 50/51.

The left of the image above shows the state of the first experiment when it is apparent I am not getting anywhere near to what I wanted. One reason is a simple mistake in determining the thread count: For 7 generations I actually would only have needed 2^6 instead of 2^7 single threads in the end, because I forgot to start counting at 2^0. This would have reduced the thickness of the starting thread by half and also changed the appearance significantly.
A more serious problem for me is that the visual outcome is somehow off. Maybe I chose the evenweave’s units too large or the wrong color, but most importantly the intermediate result does not have the properties I expected it to have: it is neither 2D nor 3D, neither are the threads stiff and straight enough for the connections of the fish nor do they show the actual movement of a fish during its life cycle. This first piece is an unsatisfying accumulation of imprecise craftsmanship, so I have to find other possibilities to work with the pattern in the material world.

Unlike techniques such as stitching or weaving where the interaction between up and down movements is crucial, the destruction concept I want to explore is independent from that. That means I need a more robust canvas. I use a non-textile base, namely a semi-see-through PVC sheet. Although it is possible to cut holes in the PVC for guiding the threads, as said before, this would artificially add something to the concept that does not belong to it. Instead, a hot glue gun is used to fixate the splitting points and keep the strings neatly in place. Pieces of a series can be stacked and the viewer can easily compare the different layouts of the strings.

For the threads I use the same type of cotton wool as with experiment number one (in white instead of blue), but only 6 generations, meaning 2^5 = 32 sub-threads which equals 4 of the normal threads. The wool is hand-dyed to achieve a color gradient from dark blue to green to yellow to white, which aids the visual understanding of distinct generations. The dyeing process makes it more difficult to feaze the threads.

There are four templates for the finished pieces, including the default setting, the privateRadius = 50 setting, the interpolationSpeed = 350 setting and the timetoSpawn = 3000 setting.

I am satisfied with the result, as it fulfills the goals I set before. There are definitely alternatives for the fixation method, but at this point the glue dots, which are quite visible despite being transparent, act as subtle placeholder for the fish bodies. Additionally, while working with the threads, some aspects emerged that I did not actively take into account in the planning phase. The first is the overlapping of the threads, naturally falling into place if the correct order of the fish births and deaths is maintained. The second is the color imperfection as a result of the (amateur) hand-dyeing. The dye did not touch any fibers below the surface of the initially whole thread, as a consequence the feazed threads partly stayed white. Both aspects fit beautifully into the whole concept, the latter one especially adds another element to the destructive dimension.

We see crafting usually as a process of creation, building, fixing and making. But most crafting techniques have destructive aspects in between: we cut fabric into pieces before sewing and we remove excess threads when knitting. I started with an artificial, minimal life form, that moves, gives birth and dies and interacts with the other life forms in a complex way, based on a set of simple rules. I explored variations of the rules and observed changes in the complex behaviour of the life forms, developping both expected and surprising features as outcome. Then I turned its heritage into a destructive textile piece, where I consciously nullified the effort of making a thread from several fibres, by feazing and dissecting it.