At first, I decided to use photography as a medium to explore my experience with long distance relationships. I wanted to try and portray my feelings, attempts to stay in contact and the challenges that I faced while trying to keep in touch with my life in Montréal.

Staring at the envelopes 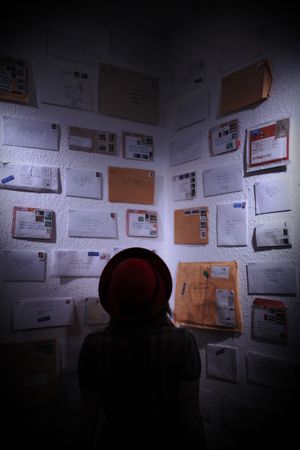 This photo shows all the envelopes I have collected from letters sent by friends and family neatly glued to a wall. I am in front of them observing them. The envelopes represent the people I left in Montreal. The relation one has with people changes when they are physically far from each other. Instead of taking part in their lives, living with them, seeing them, doing activities with them, you are forced to become much more passive. When you are away, you become more passive, observing people’s lives rather them being an integral part in them. You observe their lives through what they tell you in their letters, e-mails or phone calls. Likewise in this picture, I will be observing the envelopes, as if I was observing my friend’s lives, rather than be a part of the actual content of the letters. 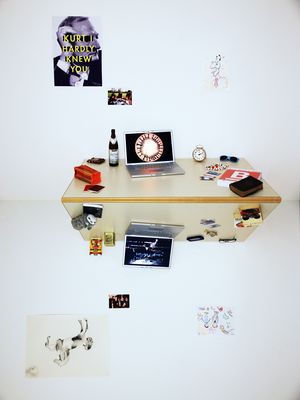 Deciding to live in another country for a year is also deciding to create a new life for a year. Upon arriving I have brought things from my old life, but with the passage of time I have also accumulated a lot of new things. This creates a duality within my small room between my “Montreal Stuff” and my “Weimar Stuff”. Thus, I want to create a picture that portrays this duality. I want to separate all my belongings between those that belong in Weimar and those who belong with Montréal. They are like a reflection of each other. There will always be a part of my Montréal life in Weimar and vice-versa. Both are separate, but they still interact with each other and influence one another. They have similarities and differences, that is what is represented in this picture. My two lives, connected, yet separated. 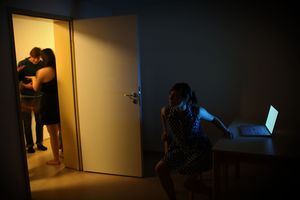 The most important new technology in communication is the computer, and even more than that : skype. It allows people to stay connected for almost no cost. You can see each other, talk to each other, the only thing that it lacks is the actual physical contact. It’s the thing that has allowed me to stay strongly connected on a day to day basis. However it also creates a dilemma: I often faced the choice between staying on my computer to talk to Montréal or getting up and partying with Weimar. I wanted to represent this difficult choice I have faced more often than not. In this picture I staged my room. On one side is the open door letting in the golden light of a party. Through it we see people laughing and dancing a drink in their hands. On the other side of the room is my open computer emitting it’s cool blue light. Between these two sources of light I find myself, half standing looking towards the party but turned in the direction of my computer. I am wearing a party dress that represents both my wanting to join the party and at the same time my longing to stay connected to Montréal by it’s blue colour that reflects the blue of the computer.

As I was working on my pictures, I realized that I had strayed from my original point of focus : the letters. They were what I had accumulated and they should be at the center of my project. I thus decided to cut up the letters to reduce them to their building blocs the words. That is when I thought about stop motion. Through animation I can let the letters come to life and really represent what they mean to me.

For my first try with stop motion I had the idea of the words from the letters I received transforming my Montreal stuff into their equivalent in my Weimar life. The idea was that of transformation through distance. When far away people change and the letters are also a symbol of that change. The change in the relationship which is no longuer direct, but has to pass through letters to survive. I rejected this idea because I thought it wasn't concentrating on the letters enough and the link between the cut up words from the letters and the transforming object wasn't strong enough.

I came up with another idea to present the idea of a relationship through letters. The letter I received from my friend would cut itself up and rearrange itself to form the answer to this letter that I would send back to my friend. I tried to make an animation on my desk and film it from a distance. This was interesting because we ould see my desk and working space where I would normally write a letter. However, this did not render the cutting very well. Because of the camera angle, the words cutting themselves away from the letter where not evident enough.

I tried to cut the letter up in stop motion a second time, this time using the animation stand in the Limona library to get a birds eye view of the letter. This would make the cutting more visible on the camera and make it more interesting. I only managed to get 40 pictures, altough I felt like I had many more. This could not create a long enough and smooth enough animation.

During my second try with the animation stand I managed to create an animation that I find smooth enough. I now wanted to develop a sound track to the animation and a short introduction and conclusion to start the film and finish it in a more

First idea of introduction and sound

In the end I decided to go for simplicity. I remembered a french saying that says : "Words fly away, the written stays". I thought this really represented what I was trying to say with letters. It transmits the idea of keeping in touch through the written medium, through letters. I also like the simplicity in the sound which is just that of the paper.