Does social distancing change the image of connections between friends, family and strangers?

The project is a visual-based interaction pattern regarding distance between two persons. During the circumstance of COVID-19, we are forced to keep a certain distance from each other.

When the distance between two persons changes, the acceleration and velocity between the particles of the interaction pattern also changes; which will then create an abstract motion pattern on the screen. Hence, two persons will be able to communicate to each other in the way how this motion pattern are shaped and how it moves.

It is always interesting to think about which elements were built when people meet each other in reality verses in virtual. How to picture the sense when one spending time with friends, family or even strangers. What are these “sense" in the air among people? Are they really invisible, or just we did not really pay attention to it?

The distance between people was not so much an issue to talk about when there were no such a regulation about distance; however recently the distance between people had became some kind of main element whether it’s indoor or outdoor. I believe it is fascinating to start to feel or think about which ones are main elements under the boundary of social distancing, which ones are sub-elements, as well as what kind of motion pattern we create when we interaction with each other in reality or in virtual world.

These intriguing motion patterns are surprisingly thoughtful and informative. It build a totally different way of observing the atmosphere between two persons when they interact with each other by paying attention to the distance.

Imagine those particles could represent words, feelings, sounds, smells of any kind of conversation between this two persons in reality. They are in one hand abstract, in the other hand could be the embodiment of a lot of invisible sense. 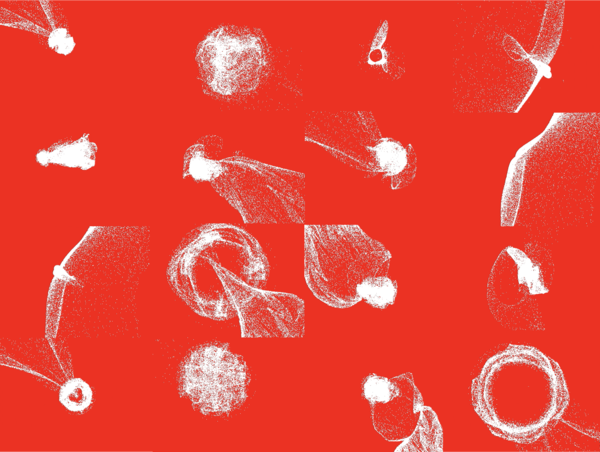 I use x-y axis to represent the location of tow persons, each person can move around virtually on a device with OSC[[OSC|Open Sound Control]] Controller. OSC[[OSC|Open Sound Control]] Controller is settled in order to send data to Max MSP. The location of person A, times 0.3, in the case to a proper scale of adding up to acceleration and velocity of the motion pattern; the location of person B, which times 1, controls the strength of attractions to the particles between these two locations.

Here is the Video Documentation of my project, which controls in real time by two smartphones with OSC[[OSC|Open Sound Control]] Controller. The two devices refer to the locations of two persons and the movement changes the distance between them. The motion pattern in this performance video shows the "sense" of interaction according to visual and the change of distance between two persons in reality or virtually.

I first set person B as a centre point (0,0) on the canvas, and control the location and movement of person A by mouse cursor. When the velocity and acceleration works well with the particles, I try to connect Max MSP with OSC[[OSC|Open Sound Control]] Controller.  As person B controls the volume of attraction, in the above case, the attraction will always be the same. When the data is able to be sent to Max MSP from OSC[[OSC|Open Sound Control]] Controller, the particles makes a dramatic motion pattern. 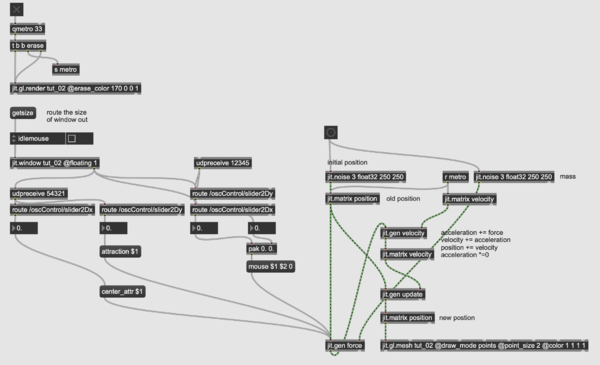