My first idea is to reconstruct one or few psychological experiments on the seeing of motion or more generally sensual experience. I am researching experiments, current or historical and try to found ways to reflect them digitally. 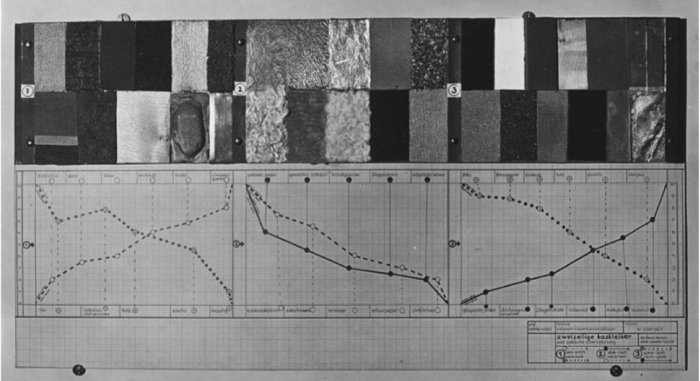 Tactile chart on a flat surface uses three set of columns which two of the row in each column consists of materials with different tactile properties (vellum, fur, cardboard, plastic, wood, wax, sheepskin, wire mesh, etc. ) and below in the last row there are graphs showing tactile values on grid paper. The compositional grid examines the tactile values such as hardness/ softness, smoothness/roughness, dryness/wetness by means of systematically combined materials for example man-made and natural, raw and fabricated ones.

Kymograph is an instrument for recording variations in pressure, e.g. in sound waves or in blood within blood vessels, by the trace of a stylus on a rotating cylinder. The device registered blood pressure, heartbeat, respiration, electrical conduction of nerves, and other physiological and muscular changes that varied with time. 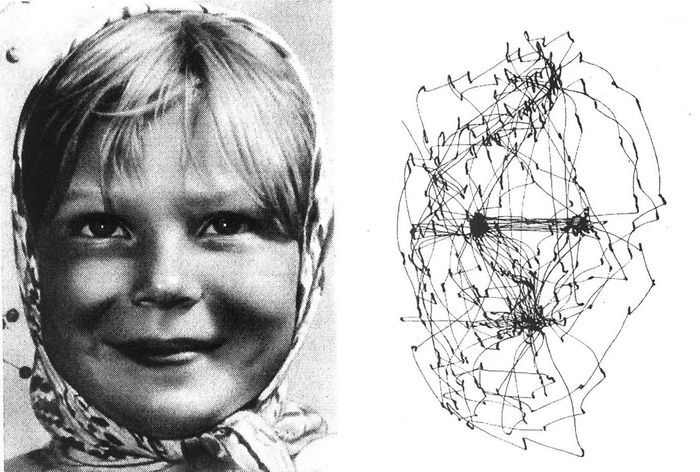 This experiment shows that when different people viewed the same painting, the patterns of eye movements were similar but not identical. When a single individual was shown the same painting a number of times, with between one and two days separating the recording sessions, the eye movement records from successive viewings were again very similar but not identical. It was evident, however, that similarity between the inspection patterns for a single observer was greater than it was between observers. Yarbus considered how viewing behaviour changes over extended periods of time, looking at eye movement behaviour in selected sections of a long (3 min) recording session. Early in the viewing period, fixations were particularly directed to the faces of the individuals in the painted scene. when we view a complex scene for an extended period of time, we show repeated cycles of inspection behaviour, “analysis of these separate records shows that each of them, roughly speaking, corresponds to a cycle during which the eye stops and examines the most important elements of the picture. This cyclic behaviour was also found when an observer viewed a photographic portrait showing only a face. In two such recordings, the observer was found to cycle periodically through the triangle describing the eyes, nose, and mouth of the pictured subject. This study of face viewing provided two key insights into how we look at faces. First, it shows there is a strong preference to look at the eyes more than any other feature of the face. Second, for extended viewing there is a clear tendency to make repeated cycles of fixations between the key features of a face.

It is a trick invented by a 19th century medium called Henry Slade. Johann Zöllner, Professor of Physics and Astronomy at the University of Leipzig conducted several controlled experiments on Slade, all of which he thought could provide experimental evidence of a fourth dimension. He then wrote a book wrote a book (Transcendental Physics) in which he declared that Slade's tricks with slates were not tricks at all but the real thing.