The Circle of Life 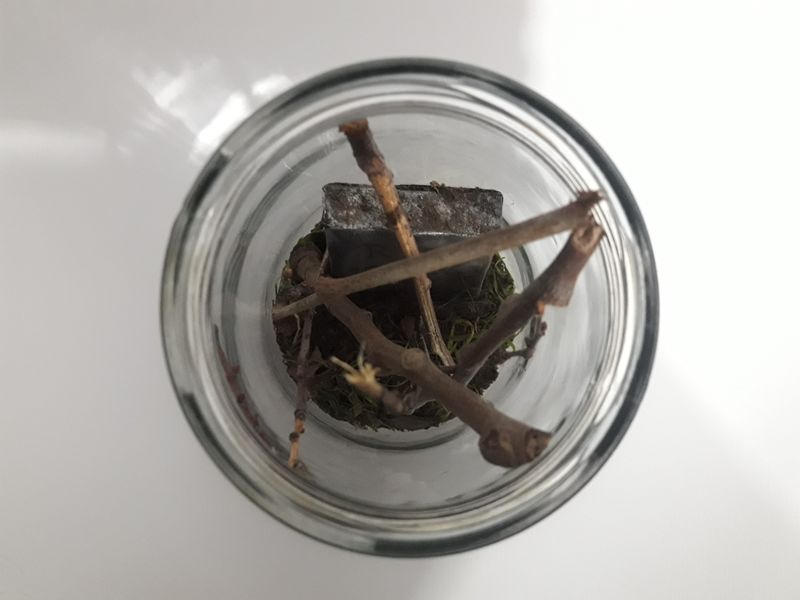 The project " The Circle of Life" is about the life circle of Physarum polycephalum, and the similarities between human beings, and this interesting organism. In this project, the main goal was to observe life circle of the Physarum, but by time, by observing the similarities between humans and this organism, this little creature got a character and a name. By giving a name to the Physarum, the bond between human and the organism got stronger. By observing the life circle of Gelb the Physarum in a natural habitat, especially when the organism turned to the spores and got mix with earth, human understood that, all the creatures are the same and nothing dies. If, Gelb the Physarum can have right conditions in the terrarium jar, it can be lively and bright yellow again, and for humans, when we finally mix with earth, we will come back to life eventually, maybe as a flower, or maybe as a tree, from the remains of our dead bodies.

My idea is, building a Physarum terrarium. In this little house for Physarum, I can watch life cycle of the organism in it's natural environment.

Petri dishes are not natural environment for slime molds. They are growing out from their tiny petri dishes so fast. So I thought, a bigger and greener new home will be more suitable for them. For a while I have let them just be, and they were everywhere, but then they have started to dry and they have stopped growing. And I have thought, they really need a new and a better home. At first, I have wanted to make a terrarium with a fish tank, but I have couldn't find one. Than, an idea has came to my mind. I had a lot of empty glass jars at home, so I have decided to make little terrariums with them. I have cooked some medium and than I have poured the medium on the bottom of the jars, they were almost ready now. I went to the Ilm Park, and I have picked a few dry branches and dead leaves, than I have put them in jars. Later I have put tiny pieces of slime molds on different places inside the jars, and just wait.

I am waiting for them to grow inside the jars. In the next days, my plan is, creating dark and scary little installations. I have got this inspiration from the horror movie The Blob (1958). I want to use organic artificial blood in the jar, put tiny gravestones and maybe put some real spider webs, that already exist in my room. I will give names to Physarums, so they will have characters, and they will be more close to human nature. Just like naming our pets, doing the same thing for slime molds, will strengthen our bond. I will put their names on tiny gravestones, so when they turn to spores and look kind of dead, their graves will be ready, just like human beings.

First meeting with the Physarum

First look to the terrarium installation

It is been a while since I updated this page. My Physarum was completely dry but I have resurrected it finally. It looks better than ever now. Soon, I will start my terrarium project again.

So far I have reanimated Physarum spores and then I have recreated my terrarium. When Physarum still bright yellow, I have put it inside the terrarium. It was a little bit shy at first, but then it has accepted it's new home. I gave a name to my Physarum, and it is Gelb. So, Gelb the Physarum has grew more and more every day inside terrarium. Later, I have put a tiny gravestone with the name Gelb on it. So, I have waited... And one morning I have found Gelb the Physarum all brown, has turnt to spores. It was mix with the earth on the bottom of the jar. For us, human beings, when we die and mix with the earth there is no turning back, but for Gelb the Physarum this is not the end. It can resurrect and turn to bright yellow, when conditions are right for it. So there is no meaning for being sad for Gelb. There is no death for Physarum, and I am really happy about it. Maybe someday, us, human beings can resurrect too, by the power of the science of course.