Haematococcus pluvialis is unicellular freshwater microalga found in different habitats around the world .There are over 8000 different species of the green algae phylum in the plant kindgom .The freshwater unicellular biflagellate(having two flagellate) green microalgae H. pluvialis specifically belongs to the class Chlorophyceae, order Volvocales and family Haematococcaseae . 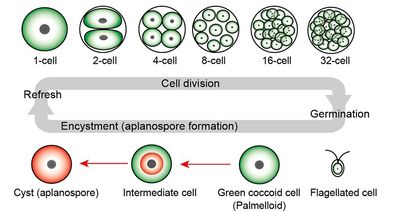 In some cases, gametogenesis may occur in aplanospores .Such process requires an exposure to extreme adverse conditions (freezing, desiccation, or nutrient starvation) followed by return to favorable culture conditions. During gametogenesis, aplanospore cells can produce up to 64 gametes which are known as microzooids. The microzooids are smaller in size (< 10 μm) compared to the zoospores (20–50 μm), and exhibit high-speed motility after their release from gametocysts. Sexual reproduction is rarely observed in H. pluvialis, and has been largely replaced by vegetative reproduction (Triki et al., 1997).

H. pluvialis is commonly found in small temporary freshwater bodies and widely distributed in many habitats worldwide. It occurs primarily in transient water bodies like ephemeral rain pools, artificial pools, natural and man-made ponds, and birdbaths.This microalga can be usually found in temperate regions around the world and has been isolated from Europe, Africa, North America, and Himachal Pradeslv India.It has been also found across diverse environmental and climate conditions. It is well suited for survival under conditions of expeditious and extreme in light, temperature, and salt concentration that would be deleterious to many other microalgae, due to its ability to encyst (become enclosed by thick membrane) in a rapid manner (Proctor, 1957). Commercial Uses Many species of microalga are used as source of nutrient rich food and health promoting compounds as well as feed for fishes.Among the commercially important microalgae, Haematococcus pluvialis is the richest source of natural astaxanthin one of the primary choices of antioxidants. Natural astaxanthin produced by H. pluvialis has significantly superior antioxidant capacity than the synthetic one. Astaxanthin has important applications in the nutraceuticals, cosmetics, food, and aquaculture industries. It is now evident that, astaxanthin can significantly reduce free radicals and oxidative stress and help human body maintain a healthy state. With extraordinary potency and increase in demand, astaxanthin is one of the high-value microalgal products of the future.(https://www.ncbi.nlm.nih.gov/pubmed/27200009 ,Front Plant Sci. 2016)