INSIDE AND OUTSIDE WE ARE THE SAME

It's Physarum's world and we're just living in it 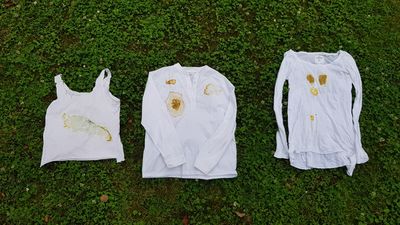 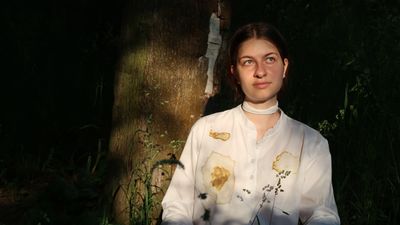 Fashion is always a statement piece. No one will ever just wear something. Clothes will always express something: a lifestyle, an occupation, a state of mind. When a human chooses to wear clothes that have dormant slime mold on it, when a human has an organism living on its clothes, what does that say about the human? Is it disgusting? Is it to not feel alone? Would a human rather have the slime grow on its skin and the clothes are just the next possible option? The collection of clothing “Inside and outside we are the same” is not part of the fast fashion world. Neither is it part of the sustainable fashion world, which claims to be connected to nature. It is a different world: Physarum Polycephalum’s world. This world is usually deep in a forest, on rotten wood, slimy and smelling. When wearing Physarum Polycephalum clothes humans might become a part of this world. Humans are sharing their bodies with a living organism. Humans are connected to nature, and disconnected from the fast fashion world, humans are post-sustainable, environmentally conscious, but in a disgusting way.

Wearing clothes is always connected to a certain state of mind, and when wearing my Physarum clothes you should keep the following concepts in mind:

we are connected to nature, but in a disgusting way; kate moss said: "nothing tastes as good as skinny feels" but i say: "nothing feels as good as mold tastes"; walking until your feet bleed, but you will go insane if you don't do it; i share my breakfast of oatflakes with the slime mold that is growing in my room; post-sustainability, i will pick up my clothes from the streets and smear slime mold onto them; like Physarum we live in cycles; my clothes change and eventually will be destroed with me; we have bled through so many fabrics; biting into an apple and realizing it is full of maggots is like putting on clothes and realizing they started to mold, but this time we keep wearing them, we become a part of Physarum's world, we're not an important part in Physarum's world anymore, we're just living in it.

Impressions of the process:

How to create Physarum clothes:

Take a look at my Experiments to see how i learnt how to grow Physarum Poloycephalum.

I grow Physarum in a stable environment: a petri-dish and Agar Agar as a medium. To make the Physarum grow, I feed it with oat flakes once every day. After four to five days the Physarum will start growing out of the petri-dish. Or not - it is a living organism after all with its own moods and sometimes strange behaviours. After spilling out of the petri-dish it continues growing on plastic foil that i layed under the petri-dish. Or it dries out completly. Again, it is not possible to foresee exactly how it will behave. Sometimes it can be refreshed with some drops of water and continue growing on the plastic foil. Sometimes not, the experiment has failed and I need to prepare another petri-dish with agar.

To press the Physarum into the clothes I used seven to nine books and a 5-kilo and a 1-kilo weight that I positioned on the plastic foil. It takes around a week to completley press the Physarum, after that it is dormant and the clothes can be stored and worn. The result looks a bit like batik.

How to wash Physarum clothes

Carefully scrape the dried Physarum off the clothing piece. Place the dried Physarum in a petri-dish with agar medium. Revive it with three to four drops of water and feed it with some oat flakes. Place it in a dark environment for optimal growth, feed it every day with oatflakes and lay a plastic foil under the petri-dish, so the Physarum can spill over onto the foil and can be reapplied on the clothing piece.

The clothing piece can be washed normally, when the Physarum is scraped off.