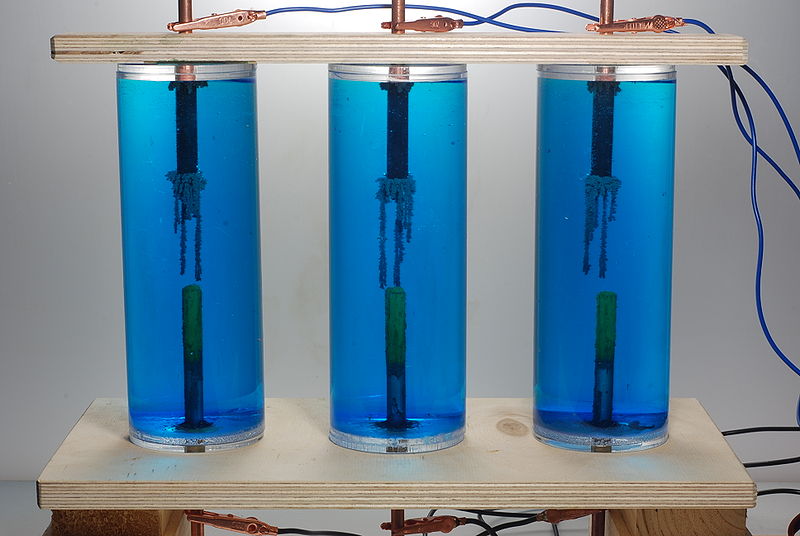 The electrochemical closedcircuit system #3 comprises of three units. Each unit acts independently, but they share the same source of energy.
The units strive to close the gap between their electrodes through electrochemical processes. While solid copper at the anode gets reduced and copper ions are pulled into solution, copper ions at the kathode get oxidized and go into solid state. The reaction is driven by the electric potential differences between the electrodes. When the growing copper fractal closes the gap between the potentials, the unit registers the resulting drop in resistance and reverses the polarity of the electrodes. In this way the growth process is also reversed, which usually results in the breaking of a grown structure or their dissolution.
In case of a breaking structure the resistance jumps up again, which again results in a reversal of polarity. This behaviour continues until the units use up their electrodes and therefore have no more way to transport energy.


For this work i was inspired by the thinking of how a complex system could find a way to organize itself and pay demand to the everchanging environment that it is in and also part of. Important works for my context were done by Gordon Pask and Roman Kirschner. Gordon Pask was trying to find a system that could possibly assemble itself and adapt to stimuli of its surrounding. With his "Ear" he found a way to differentiate between two different audio frequencies through an electrochemical device. Roman Kirschner with "Roots" was especially interested in what transformations emergence can bring forward in a sufficiently open system.


For my work the emergence is an important aspect. Although each unit is a rather simple system with simple rules, the fractal structure that arises cannot be predicted. Still the result can be interpreted very easily. Either the gap is open or closed - zero or one. With this work i want to emphasise the state in between two states. Virtually every process can be broken down to a composition of atomic decisions. When is the tipping point reached? When does a neuron "decide" to fire? When is a category not fitting any longer? In general: how does decision making look like?


Another important aspect is the constantly growing fractal structure in each unit. It resembles a simplified process of a system to respond to its environment. The structure is the result of the system paying demand to the electric stimuli. It tries to find the most - energy - efficient way to close the gap. The "better" the structure the higher the current running through the unit the faster the growth. But faster growth also results in a faster wear off of the electrodes.
Even if the starting conditions for each unit are the same, there will never be exactly the same structure. If the gap is closed the grown structure destroys itself to start growing from anew. The new structure starts growing on parts of the old structure and, again, tries to find the best solution for the closing of the gap still paying tribute to the everchanging conditions in the unit.