In our times art became something that in order to be valued has be filled with a ‘meaningful’ message, a political proposition. Personally it feels like decontextualising art from any environmental influence through white cube galleries in an elitist culture while demanding a re-contextualisation through ‘exterior’ information makes modern art rather inaccessible. Additionally though, it feels like that artworks are often blatant and 1-dimensional, only asking rather ‘simple’ questions or being a mere latching comment to a controversial thematic. This is a completely personal opinion and based on personal encounters. In this whole thematic one should bear in mind that art-journalism and art-criticism is focused on verbalising artistic positions, and these very people have the most impact on art-evaluation and thus art-reception, sometimes even leaving the creator surprised. While it is hard to pinpoint, what I don’t appreciate about many modern artworks, I dislike the trend in arts of content being reducible to an explicit message, - knowingly that this is also only half the story.

The player is in on a hilly plain above an ocean of clouds. The wind slowly sweeps through the grass. The player is able to slightly interact with undefined firefly-like beings, ignes fatui, which emerge out of the grass and cluster on different spots. A large white structure consisting of arches stands off-centre on the grassy circle.

On this quiet and serene place, the player is neither harshly confronted nor avoided. To put it simple. The player is -there-, in this moment, no specific questions are asked, no questions have to be answered. It is no counter concept to ‘screaming’, ‘straining’ political art. It is no escapist alternative.

I value atmospheres; places which are there, but don’t need any further explanation to exist. Atmospheres which are saturated with many very light emotions of different natures, creating an ambiguous and vague experience but not being overly questioning.

The viewer is free to look around, remember something, reflect or contemplate a little or to zone out.

While the structure is enormous it doesn’t look massive or overwhelming. The arches are arranged in an intertwining non-perfect-symmetrical order. There are no walls, only columns. The only purpose of this construction is itself, no use as a container. The idealised, minimised and aestheticised look of a (neo-)classical ruin may trigger curiosity, questions or memories or a sense of serenity.

My personal experience with virtual reality projects is that many artworks use this medium as there are more angles of perspectives to give a kind of sensual overload and bombardment of the viewer. While this kind of approach arguably suits this medium I find it hard to breath.

I think that immersion is often misunderstood. It is not about overflowing the viewer but about letting the player enter the world. One sentence of [you] Jörg Brinkmann sticked to me. Immersion results from projection ( - of oneself onto/into the world). Additionally, interactability doesn’t necessarily make a work immersive.

Phase I - Memories and Inspiration

In the beginning there was a feeling. Vagueness. Faded memories. A childhood memory of the beginning sequences of the music video “El Mañana” by Gorillaz. The smell of cold morning dew on grass burned by the summer sun. The bright white colour of greek rock walls. The sound of Provençal Cicadas. Paintings by Camille Pissarro and Paul Baum.

Xavier Corberó talks about his life-time sculpture and house in Esplugues de Llobregat with Albert Moya on Nowness. Resonating quotes in his interview/portrait were:

“It possesses utility in itself, not a defining function”, “A place in which the mental space - not the real one - is what matters”.

I wanted decidedly not to approach photo-realism. While trying to perfectly mimic the world we live in it still feels off. Photo-realism doesn’t promise immersion. But how do I represent something I can’t fully grasp myself, the distant image? What I like about “flat” 2D-colourisation is, that we don’t ask ourselves if it is true. We accept it as it is.

Deeply inspired by Corberó’s house complex I already was working with these clean, white, half-circle arches. They gave me a feeling of being an abstraction of a concept rather than a common practice or comment on an architectural epoch. While consisting of symmetrical idealistic beauty proportions it also consists of rather natural organic attributes. With the absence of harsh mirror axes, ornaments and practical use it vanishes the lines of architecture, sculpture or even manmade object. While probably playing with associations of ancient classical buildings and labyrinths for me the final structure evokes a feeling of simple existence as life itself. (final structure in Phase IV)

I wanted the environment to be rather un-distracting and endless, open, light, bright and slighlty warm. Yet it should still be a balance between natural and dreamlike.

I played with the idea of making a 3d-sound-scape, a musical piece, voice over or implement text.

I quickly had to resign from the idea of having an endless plain of grass. Not only for technical or performance reasons but I didn’t want the player to get a feeling of being lost.

A mesh combiner made the grass performative. The shader changes the blades of the grass to additionally fake sweeping wind and visually remind of clouds casting shadows onto the plains, even-though technically there aren’t any clouds nor a sun in the sky, it helps to diminish the alienation of the otherwise very stiff ‘nature’. 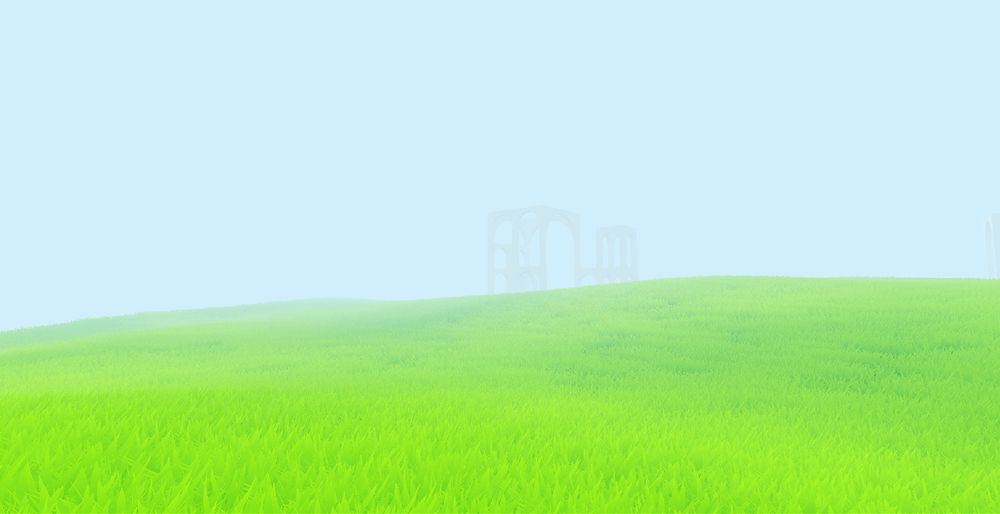 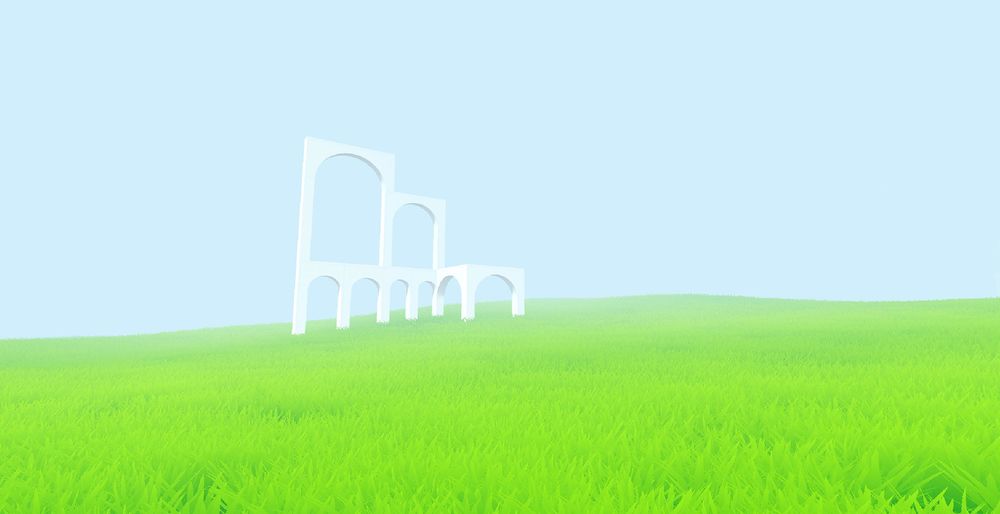 I decided I don’t want the structures to reemerge in different forms. Although I liked the visual appearance of such the structures would create too much dialogue revolving around each other. I had to simplify.

At first I created reusable segments for the arches, to have a more modular and rather intuitive ability to rearrange. While for this task it worked great, the edges of the stacked objects would create undesired double edges, marks, flickering, wrong shadows etc. I had to take the model from Unity and retouch it in Blender.

I created a cloud-like plain bending towards the horizon to fake additional distance. The shader was created in the node based HDRP-ShaderGraph.

Sadly I couldn’t use the volumetric fog feature of the HDRP because the grass-blade custom shader-material would just be ignored for the depth-calculation resulting in an overlay effect of further fog on top of the closer grass. 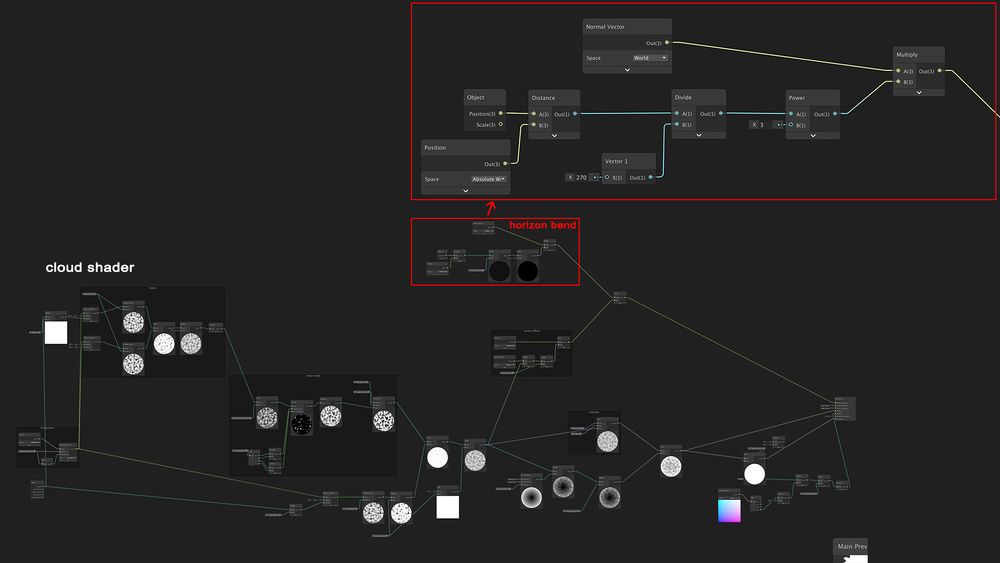 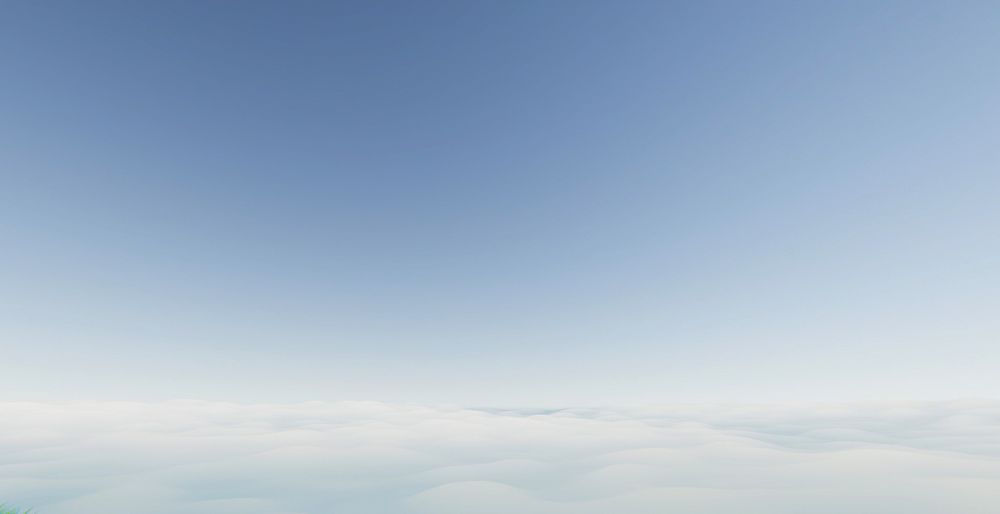 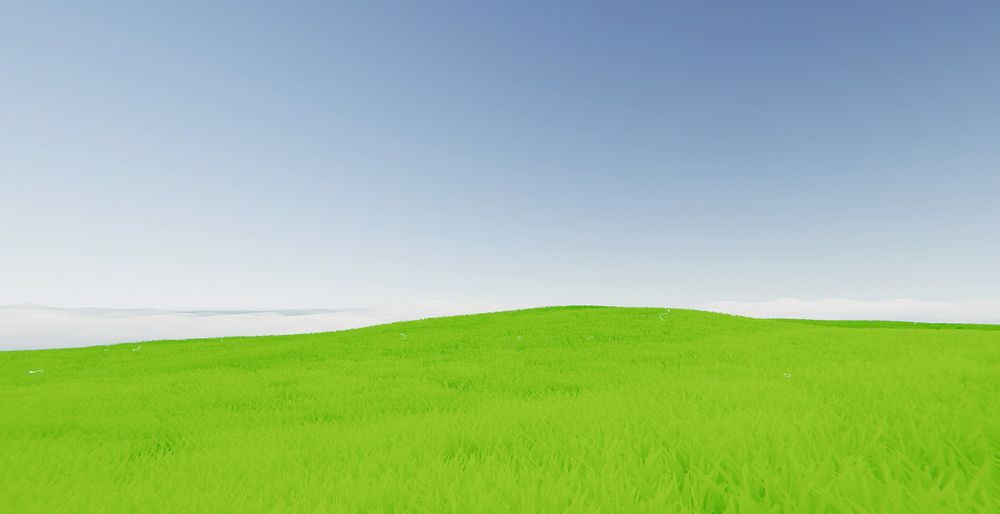 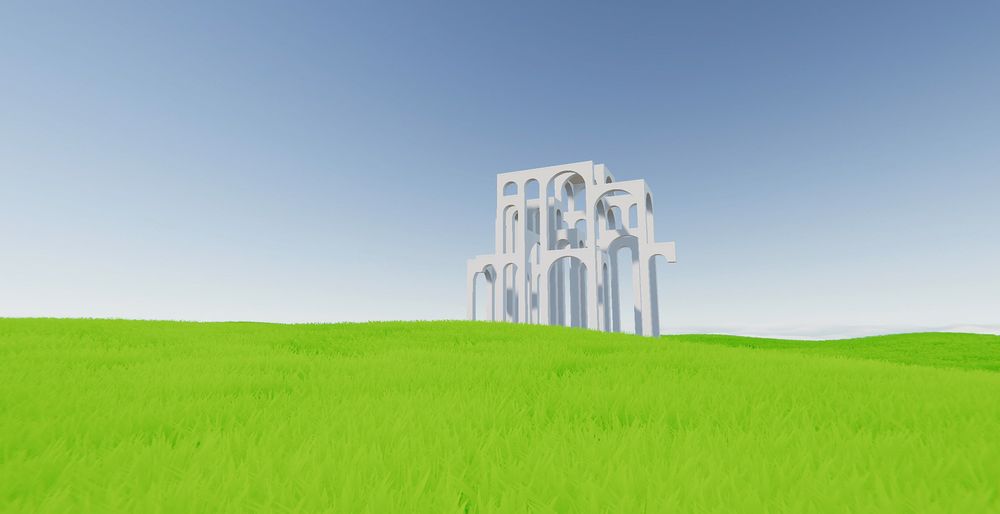 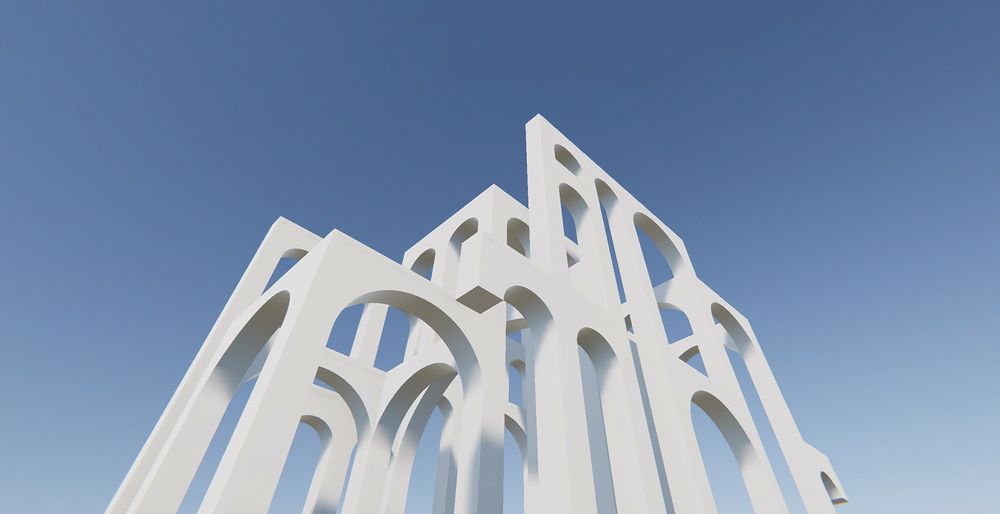 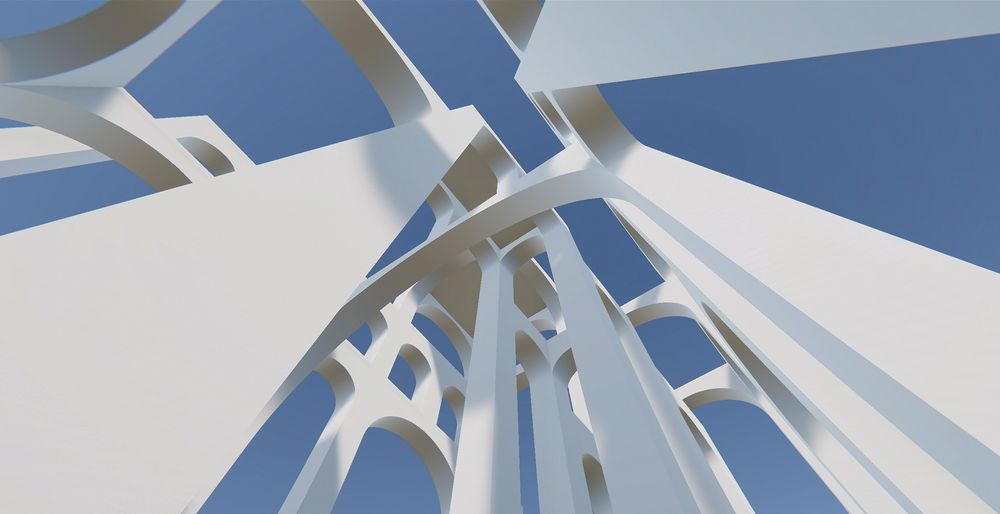 I created and tried out different musical themes, some more melodic and harmonic others less western influenced. I had to leave it out since the chord or pentatonic scale would interpret and ‘stain’ the atmosphere, affecting and biasing the viewer too much emotionally.

I questioned myself if I should implement a second layer. Either through text or a voice over. Both are too dogmatic and specifically thought-provoking. While the latter being even more intrusive.

Even if the soundscape is very natural it is quite personal. My brother and I took field recordings of our childhood-region and I layered them with field-recordings we took on different holidays. Personally, these are very familiar, intimate and soothing sounds. My first idea of being able to auditorily explore a 3D-soundscape was also dropped but recycled into little clusters of ignes fatui or firefly-like-beings emitting some sound and providing a micro-interactive experience. This gives one the feeling of existence whilst not giving the player a task. 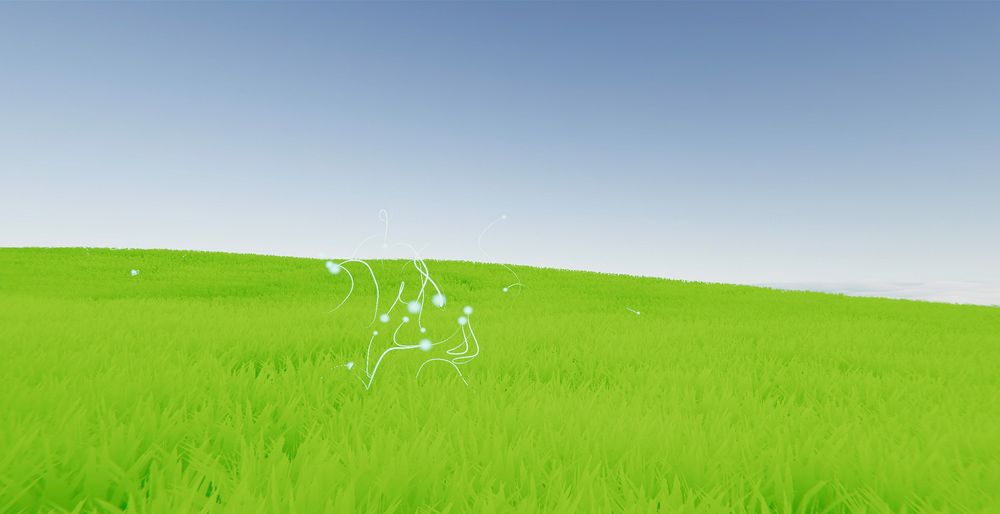 On a technical standpoint I could rewrite the grass-shader to enable the volumetric fog possibility. I grew quite fond of the island in the sky / eternal platform / plain above the clouds look, but it might still be worthwhile revisiting the idea of an endless plain.

On a conceptual standpoint I ask myself if the player feels (completely unintentionally) isolated or trapped. On the other hand, I question myself (contrary to my statement in the beginning) if distancing myself from graspable political propositions or of other kind renders my work meaningless.

Personally, I am I happy I was able to simplify and simplify and don’t fall into a habit of adding, adding and adding.