Only in the vastness of space my thoughts got the room they needed to make themselves audible. “Die Raumtagebücher” opens up an abstract room, animated by stories. 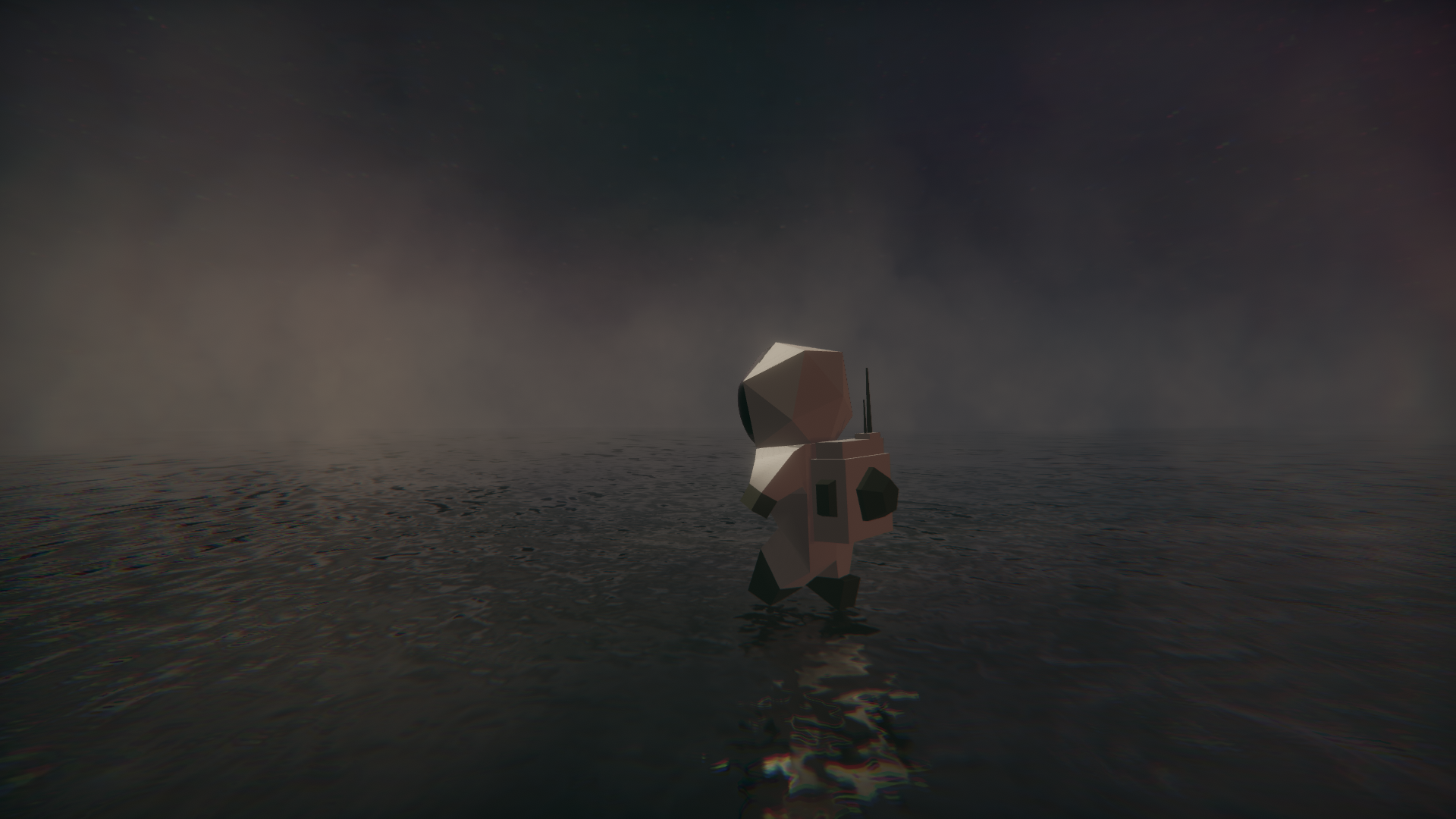 This link guides to a recording of the piece


Going into the project I knew I’d like to work on a narrative piece. There should be voices and characters and the piece should feel alive somehow. Discovering free licensed Audio Books with narrators changing from chapter to chapter I got the idea of a room filled with characters running across, speaking to them self. I used a common theater practice used to gain a sense for using and filling out the room in movement to develop a system which makes the characters walk independently and endlessly throughout the plane. They determine a random point, turn towards this point and go straight towards it until determining a new spot to go to. This way the characters get somewhat of an autonomous behavior giving the piece the possibility to run endlessly and creating a slightly different experience each time.

To fill the characters with stories, faces and voices, I gathered around a small ensemble off friends I knew to be passionate writers and poets and each having their own artistic voice in writing. I created an experimental setup consisting of the before established rules of movement and some rules for writing and recording. The plan was to go by this experiment, filling out the persons more and more and then see, what the piece feels like. 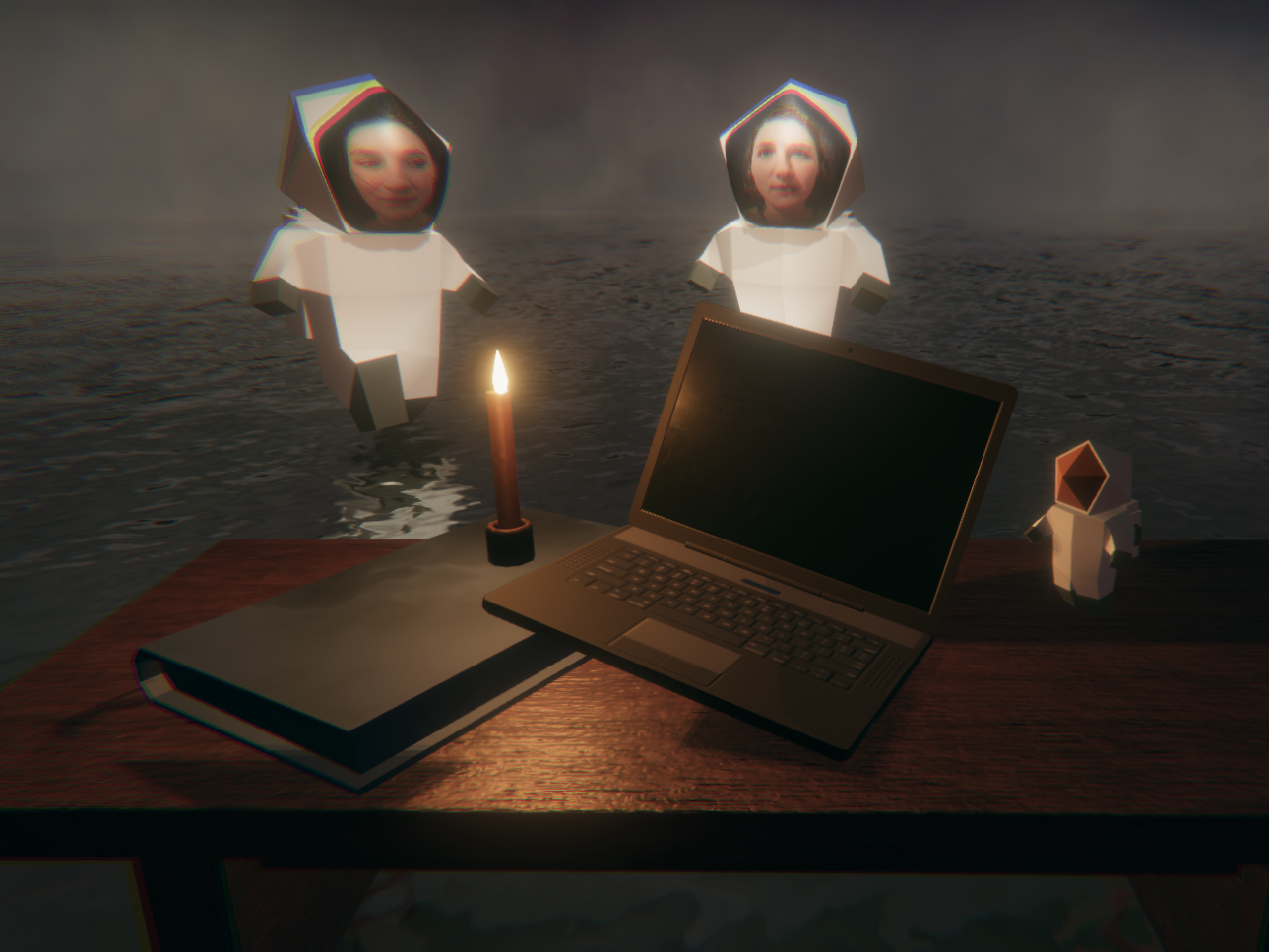 The Concept for the different characters stories was to write an artistically encrypted logbook to capture emotions and changes in life throughout a certain amount of time. The texts were written at set times, with set routines – each different for everyone but consistent in themselves. We hoped to create versatile and profound portraits of ourselves and establishing an authentic narrative throughout the connections of the individual texts, expressing ourselves. Some rules regarding the rough form of the texts were added to the experimental setup to achieve a consistent aesthetic throughout the experience as a whole. Always writing down the determination and motivation felt whilst writing the text on a scale from one to ten, there was the possibility to reflect the feeling of the text in the movement of the characters by connecting the variable speed of the movement to the motivation and the time, the characters had between deciding on a new destination to the determination. Everything can be numbers. 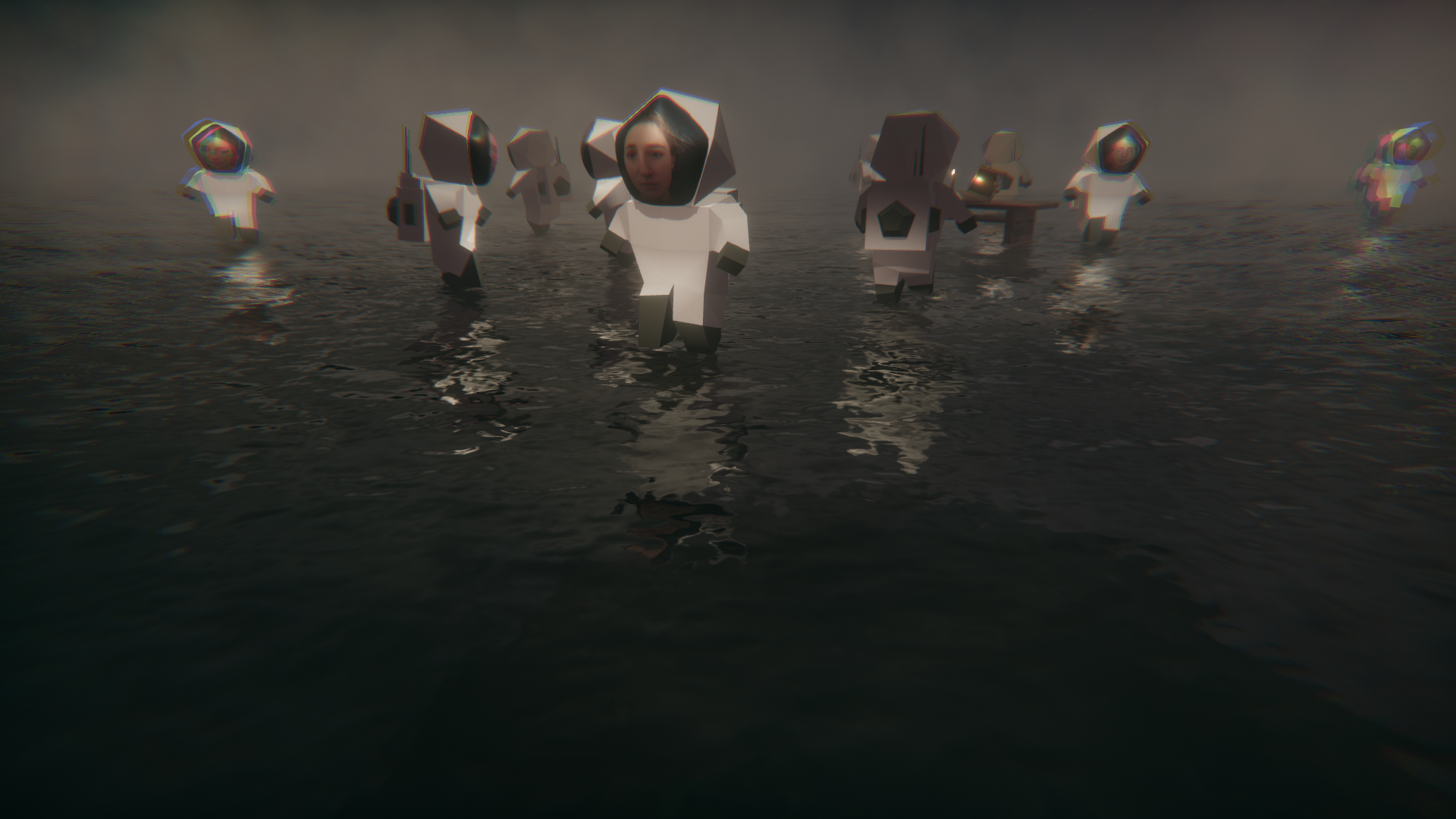 After a while of generating texts and filling up the experience piece by piece the impression of a room for reflection shaped itself. Giving the player direct control over his movement and therefore position in this lively space creates the possibility for the player to observe his own behavior and reflecting on it. This would be about questions such as: Which characters or text do I want to keep listening to? Who bores me and therefore makes me move away? What other factors make me want to change my position? How do I feel in the center where most of the times big groups gather and how do I feel standing beside the action, looking on it from afar? 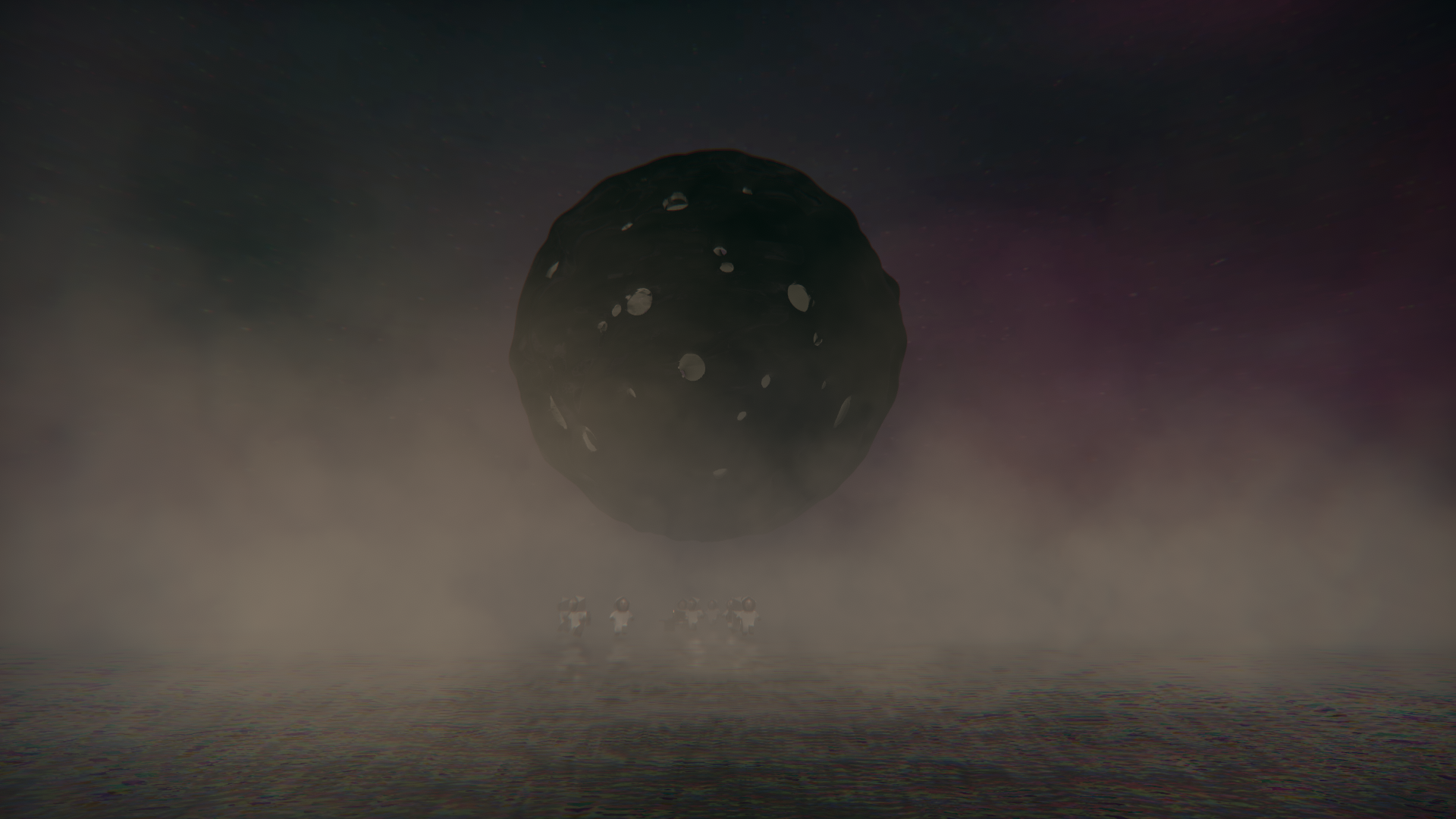 The space for reflection is also reflected by the design of the space itself in a somewhat way. I tried to create much free room and a calm but strong atmosphere. Adding the table with the Laptop as a starting point, I tried to tie together the immediate reality of the receptor and the virtual experience, to enhance the immersion and making it easier to find oneself in the player-character on screen. By Adding the big ominous orb over the scene, the big plane got a center, making it easier to navigate and getting a sense for where you stand. Also the orb marks the place with the most characters crossing each other, due to being the center of all possible destination points wich results in many big crowds under the orb. 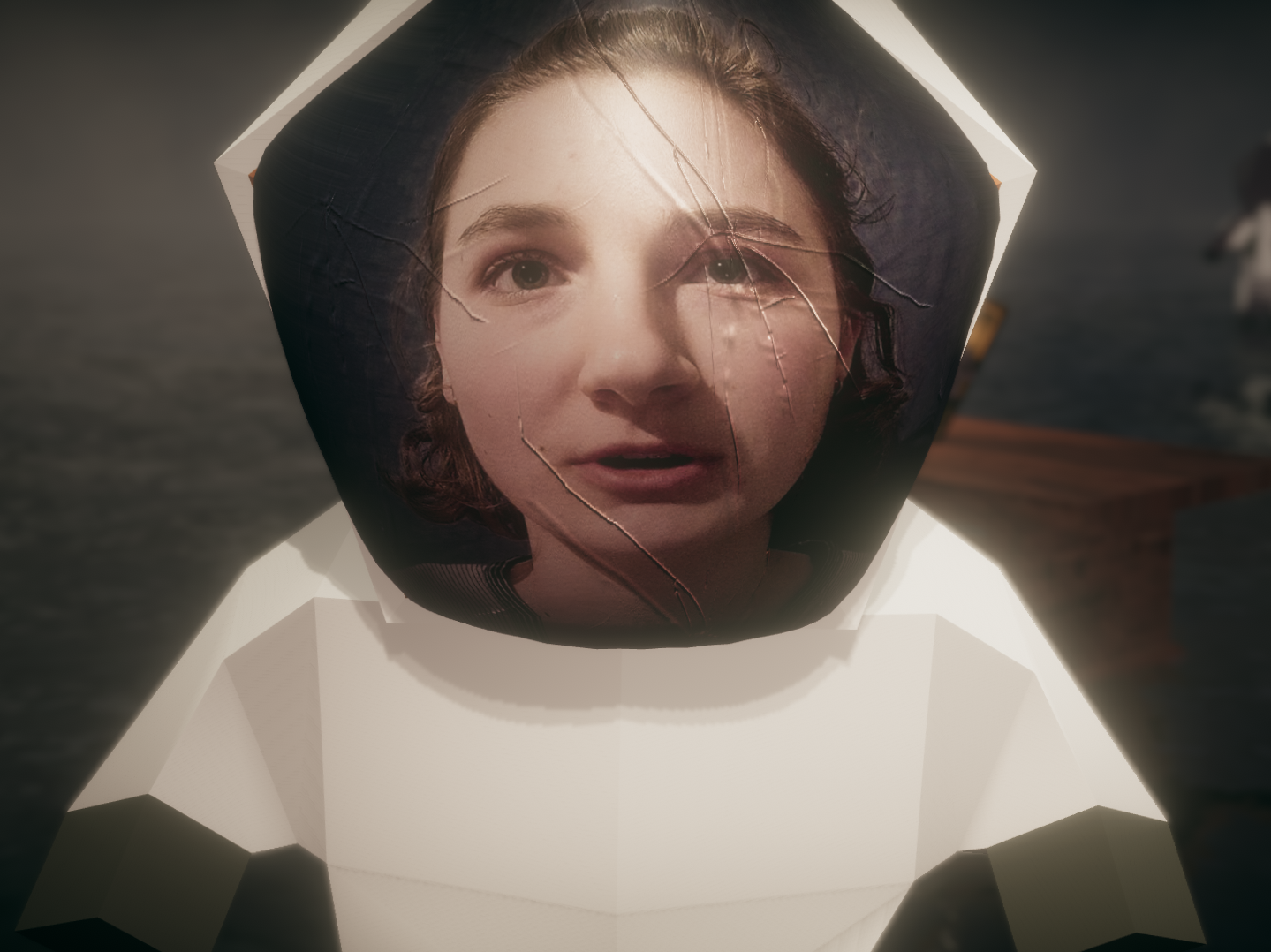 Lastly, I added the feature to switch to alternative cameras, following the characters automatically. This feature can be used to take a step back and listen to all the stories without having to stressfully following the characters around. This feature is not as intuitive and immersive and therefore disconnected from the reflecting experience but proved valuable for diving deeper into the storys and complex portraits itself.