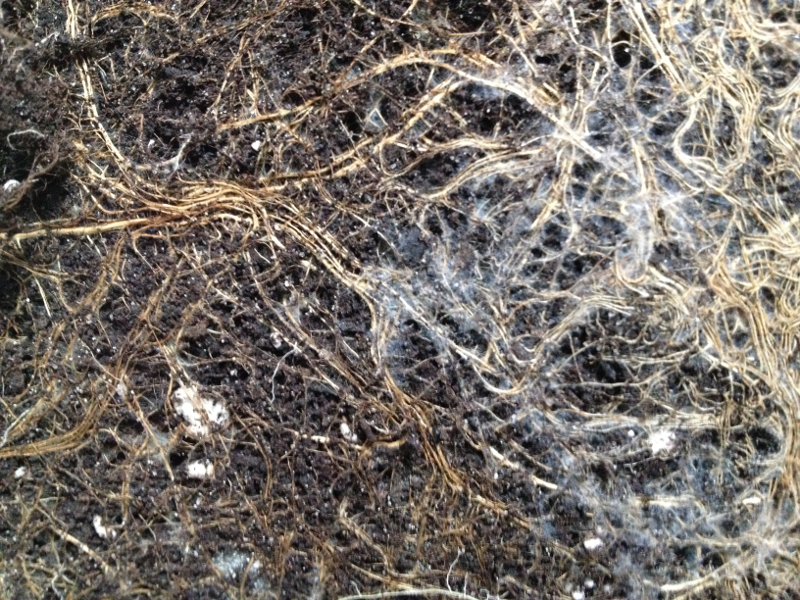 There is several evidence of "interfloristic" communication. For example mushrooms in the forests connect the roots of any tree to each other. So that they build a kind of network within the forest. Other Trees are able to communicate via a kind of pheromone to warn other trees while their leaves are eaten by animals. The purpose of my experiments will be to research this complex of communication between plants. I want to build a bio circuit with different biological modules. One example could be to bring in a analog signal to a plant, send it via the roots to a mushroom and then back through another plant to a sensor that is able to translate it back into an analog output. That is the basic idea.

the battery of the future (german)

plant do really respond to the way we touch them

First of all I wanted to find a way not to harm the plant that much. Because most of the conductive metals are reacting with the plant itself causing a poisoning. Therefore I tried to find out the specifics of graphite as a non reactive invasive electrode to measure (whatever) inside the plant. During my research I found a very nerdy, fetish article about a pencil IBM merchandise as a part of the IBM Electrographic (you need to scroll down, after all the pictures is finally the article). The next step was to find out by myself which degree of hardness would be best in its conductive characteristics. So I did the same experiment as shown in the article and found out the softer the lead, the better is its conductivity. This has to do with the way graphite lead is manufactured. The specifics of carbon/ graphite you can find here (it is in german).

The next idea was also to measure on the surface of the plant, so I just ordered some electrode pads with a layer of silver and carbon. here is a link to order it

When I finally had attached the electrodes on the surface and inside the plant, I found out it is not so easy to understand what are the values displayed on the multimeter. For sure it shows us a value in voltage and it is also possible to measure the resistance of this organism, but what does it say to us? A signification (what I want to do finally) is a scientific instrument to hear invisible processes going on. One of the most famous signification is the Geiger counter and it sonify the radioactivity or better say the decay rate of a radioactive element. So a sonification shows us a specific process. What are the processes belonging to electricity inside a plant that are usable for a sonification? Another question that came up, was how is it possible that there is no measurable current inside the plant? If we take the formula for calculating the resistance: R = U/I it would lead us to the point that there could be a mathematical problem: division by zero. But at least we can calculate that little amount of current by convert our formula to: I = U/R. The next phenomenon that I observed by the experiments of what to measure was there are no constant values. Sure, a plant is a living organism and therefore it changes electrical values because of a intercellular exchange of information. But the values for resistance for example rises till the end of the scale when it is measured. At the same time the organism seem to be "charged" with a rising voltage. The question is why this is happening?

If you observe the plant for some days, you probably see that the voltage is slowly changing over a day. There is something like a daily routine also in the life of a plant.

It is also very interesting to see what happened to the values and the plant if you stress parts of it. For me it seems like the electrical charge is shaked like in a cocktail shaker. That means the values become unpredictable and can also change the direction. After a while it has the effect that the plant seems to go back in a kind of regular state.

Here are some examples for the setup that I used: 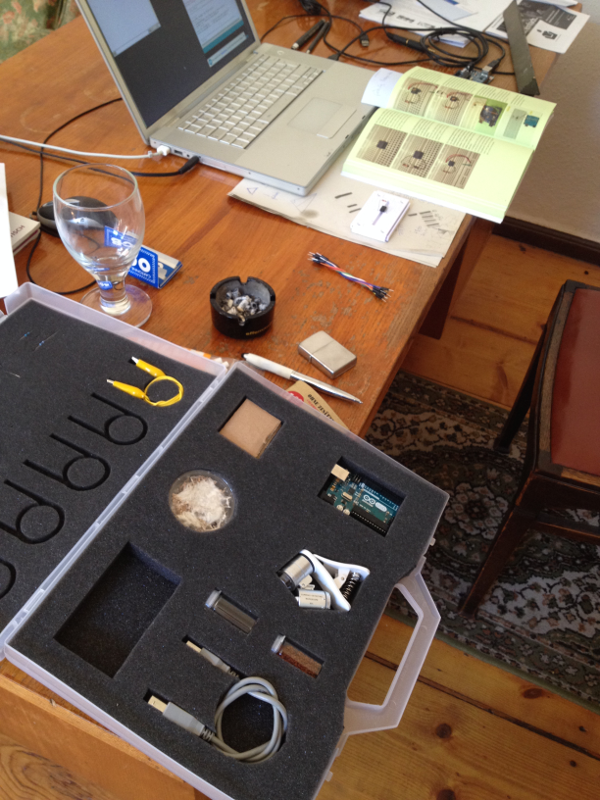 Before I can make up the setup to test if there is any connection between the roots of a plant and a mycorrhiza fungi, it is very important to me to know what kind of signals I can get in which quality. The electricity inside a plant seems to be the opposite of the electrical signals inside the muscles of an animal or human. That means while humans control their muscles by sending electrical signals, plants generate a stronger electrical level if moved or stressed form outside. To understand the network between plants and mushrooms, it is necessary to go deeper in understanding the electrical and also chemical processes inside plants. My next step will be to research the electrical potential of mushrooms and how it is possible to measure manipulations on it. At least I would say to just stick some electrodes at an organism will produce some signals, but it will be totally unclear what kind of quality these signals have. I could also imagine to see it more on the chemical level than on a physical electrical one.

As you can see on the photo, I used the book "Home made bio electronic arts", the circuit by Martin Howse (described in that book) and a tool kit, developed by Mindaugas Gapsevicius aka Miga.