Microscopy with Oil Immersion and inspection of previous samples

"In light microscopy, oil immersion is a technique used to increase the resolving power of a microscope. This is achieved by immersing both the objective lens and the specimen in a transparent oil of high refractive index, thereby increasing the numerical aperture of the objective lens. Immersion oils are transparent oils that have specific optical and viscosity characteristics necessary for use in microscopy."(https://en.wikipedia.org/wiki/Oil_immersion) 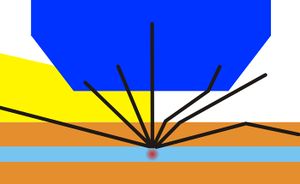 "Principle of immersion microscopy. Path of rays with immersion medium (yellow) (left half) and without (right half). Rays (black) coming from the object (red) at a certain angle and going through the coverslip (orange, as the slide at the bottom) can enter the objective (dark blue) only when immersion is used."(https://en.wikipedia.org/wiki/Oil_immersion)

Further read and how to: http://www.micrographia.com/tutoria/micbasic/micbpt07/micb0700.htm

Fungi, mycelium and other related discourses

"While mushrooms might be the most familiar part of a fungus, most of their bodies are made up of a mass of thin threads, known as a mycelium. We now know that these threads act as a kind of underground internet, linking the roots of different plants. That tree in your garden is probably hooked up to a bush several metres away, thanks to mycelia. The more we learn about these underground networks, the more our ideas about plants have to change. They aren't just sitting there quietly growing. By linking to the fungal network they can help out their neighbours by sharing nutrients and information – or sabotage unwelcome plants by spreading toxic chemicals through the network." (http://www.bbc.com/earth/story/20141111-plants-have-a-hidden-internet) --> see allelopathy for more info

"Habitat, like people, have immune system, which become weakened due to stress, disease, or exhaustion. Mycorestoration is the use of fungi to repair or restore the weakened immune systems of environments" (Stamets 2005:55)

Fungus expert Paul Stamets called them "Earth's natural internet" in a 2008 TED talk. He first had the idea in the 1970s when he was studying fungi using an electron microscope. Stamets noticed similarities between mycelia and ARPANET, the US Department of Defense's early version of the internet. (video http://www.ted.com/talks/paul_stamets_on_6_ways_mushrooms_can_save_the_world)

"Mushrooms produce strong antibiotics. ... We share in common the same pathogens. Fungi don't like to rot from bacteria, and so our best antibiotics come from fungi."(https://www.ted.com/talks/paul_stamets_on_6_ways_mushrooms_can_save_the_world/transcript?language=en)

Most fungi grow as mycelium consisting of a mass of branching, thread-like hyphae, which are cylindrical, thread-like structures 2–10 µm in diameter and up to several centimeters in length. All together hyphae may form extremely large organisms, as for example Armillaria ostoyae, which occupies 965 hectares os soil found in US Oregon's Blue Mountains (Casselman 2007).

“Mycelium is the vegetative part of a fungus, consisting of a mass of branching, thread-like hyphae. A typical single spore germinates into a homokaryotic mycelium, which cannot reproduce sexually; when two compatible homokaryotic mycelia join and form a dikaryotic mycelium; that mycelium may form fruiting bodies such as mushrooms.”(wikipedia)

“Turning a backyard compost pile will commonly expose visible networks of mycelia that have formed on the decaying organic material within. Compost is an essential soil amendment and fertilizer for organic farming and gardening. Composting can divert a substantial fraction of municipal solid waste from landfill.”(wikipedia)

"Around 90% of land plants are in mutually-beneficial relationships with fungi. The 19th-century German biologist Albert Bernard Frank coined the word "mycorrhiza" to describe these partnerships, in which the fungus colonises the roots of the plant." (Fleming 2014)

“The team tested the soil in the cylinders for two compounds made by the marigolds, which can slow the growth of other plants and kill nematode worms. In the cylinders where the fungi were allowed to grow, levels of the two compounds were 179% and 278% higher than in cylinders without fungi. That suggests the mycelia really did transport the toxins.”(ref http://journals.plos.org/plosone/article?id=10.1371/journal.pone.0027195) The team then grew lettuce seedlings in the soil from both sets of containers. After 25 days, those grown in the more toxin-rich soil weighed 40% less than those in soil isolated from the mycelia. "These experiments show the fungal networks can transport these chemicals in high enough concentrations to affect plant growth,” says Morris, who is now based at Xavier University in Cincinnati, Ohio.

As a result of this growing body of evidence, many biologists have started using the term "wood wide web" to describe the communications services that fungi provide to plants and other organisms.

Mycophone_emergence is an invitation for you to become the explorer of the force of technology, to enter the realm where biological and non biological are no longer anything else but a type of material that technology as dynamic force deals with and manipulates through the hands of human beings.

"Radio Mycelium proposes the construction of a series of experimental situations examining a new networked imaginary, the single organism of the fungal mycelium, in relation to pathogenic, electromagnetic communications."(http://fo.am/radio_mycelium/)

"As an installation fungutopia shows the different possibilities that mushrooms offer to help to make the world a better place: Mushrooms are open source medicine, food, fertilizer and soil-recovery-method. They can be cultivated quite simply even indoor and are perfect for urban fungiculture. The workshop shows simple techniques to grow mushrooms in cities, whereas the prototype MUSHroom tries to combine Open Source Electronics with Biology to grow even more rare medicinal species year round indoor. As a community-project fungutopia tries to bring together people for urban fungiculture and share knowledge and experience. The Online Community grow.fungutopia.org is the web equivalent of the f2f experience."(http://www.fungutopia.org/index.php?/about/)

"Growing Geometries” draws references to old mathematical questions such as the squaring of the circle and how non-trivial visually simple forms can be when expressed in mathematical formulas."(http://theresaschubert.com/arts-experiments/art/growing-geometries-tattooing-mushrooms/#concept-text)

"..was inspired by British novelist J.G. Ballard writing about living plant technologies in his collection of short stories Vermilion Sands (1971). In his fictional world Ballard describes a psychotropic house that interacts with its inhabitants and bio-clothes made from hypersensitive plants that respond to their wearers. Nomeda and Gediminas Urbonas created a laboratory in the gallery making living material by mixing mycelium (mushroom root) with agricultural waste (sawdust, straw etc)."(https://traceywarrwriting.com/2015/10/15/m-for-mycelium/)