Putting up Media into dishes

Result after one week

The Earth has evolved through the exercise of error and consciousness. Man himself is only flesh, matter that becomes living energy by assimilating his mystical and cosmic form. This project is a personal discovery through consciousness that use art as a ritualistic means of expression in which ancient ecuadorian indigenous schemes and body bacteria build together a bridge of symbiotic relationships. The ritual of giving life to this symbols transmit- ted the feeling of time, space, and reality; therefore past, present and future.

Video in a thumbnail box

The Earth has evolved through the exercise of error and consciousness. Man himself is only flesh, matter that becomes living energy by assimilating his mystical and cosmic form. Human behaviour has the power to transform the biosphere. As a species man is the greatest existing biological force: it consumes, alters, transforms, creates and destroys. It increasingly resembles to an insatiable bacteria of resources, territory and power, strengthening its destructive nature and minimizing its creative nature by its predatory instinct. This project is a personal discovery in which my cultural roots and current state of consciousness are the protagonists. Through the magnification of the imperceptible, I intend to open a discussion in an archetypal and symbolic way about the essence and purpose of human life, with the help of images, building a bridge of symbiotic relationships between past, present and future.

Past: Represented by geometric schemes of animals originated from the indigenous culture of “Salasaca” of the central zone of Ecuador (Province of Tungurahua). In the Andean worldview, art is one of the essential forms of transmission of culture and ancestral teachings, is also an identification tool and a vehicle of expression. Indigenous culture is characterized by its conscientious relationship of dependence with the forces of nature. Getting retroactive-feedback through conscious energy achieved with a lifestyle close to nature and grace rituals that include offerings.

Present: Myself and my being, represented by my body. My present external condition, the skin I inhabit; in which allows me to interact in this physical reality with other life forms that adapt in symbiosis to survive.

Future: Bacteria that inhabit my skin as anonymous guests on scales almost impossible for my understanding. According to science these are beings provided with special conditions in the universe, because they are able to adapt, unite, mutate and survive in any existing environment.

Ritual The consciousness about my being and its place in this frequency connects me directly with life. It awakens my sensory sensibility in such a way that it makes me part of the cosmic energy in the great universal mystic temple, which I thank with these actions, as my ancestral culture would have done: using art as a ritualistic means of expression and life. Action in which I give life to these ancestral schemes that are symbols enclosed and transmitted through the feeling of time, space, and reality.

After several times of experimenting with deferent types of nutrients and ways of applying the bacteria. I finally reach the expected result:

The experiment will need 2 types of Agar.

ALL THE EXPERIMENT SHUND BE DEVELOP IN THE INFECTION FREE AREA!

Cut the schemes on the foil and preserve in alcohol.

Prepare AGAR 1, mix and heat until boiling. Put the AGAR 1 into the 3 disinfected petra dishes, add the schemes on the top, cover and wait until it draws.

with the help of the blades and the tweezers cut the edges of the schemes in order to empty the design, cover and preserve.

Prepare AGAR 2, mix and heat until boiling. With the help of the pipet place the AGAR 2 into the empty places of the petra dishes, cover and preserve until it draws.

Take bacteria from your skin with the cotton swabs and draw carefully into the AGAR 2 area, cover it and let it rest for about 8 days. 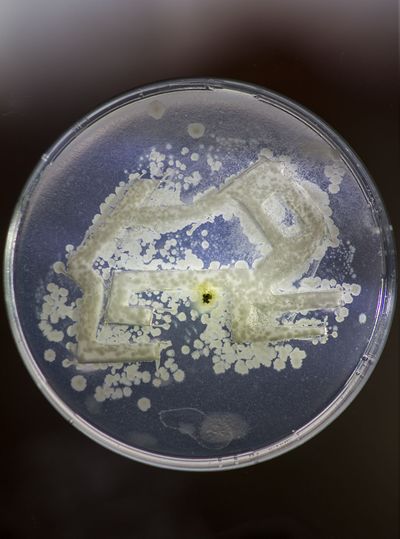 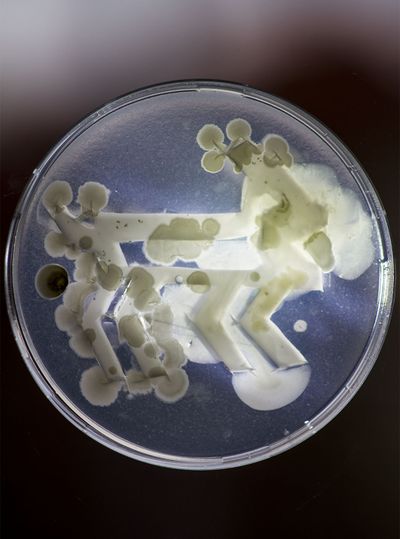 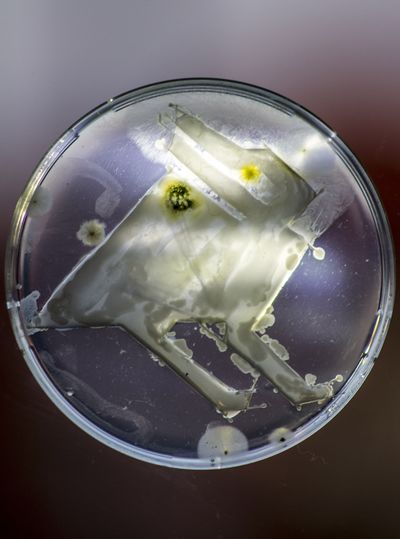