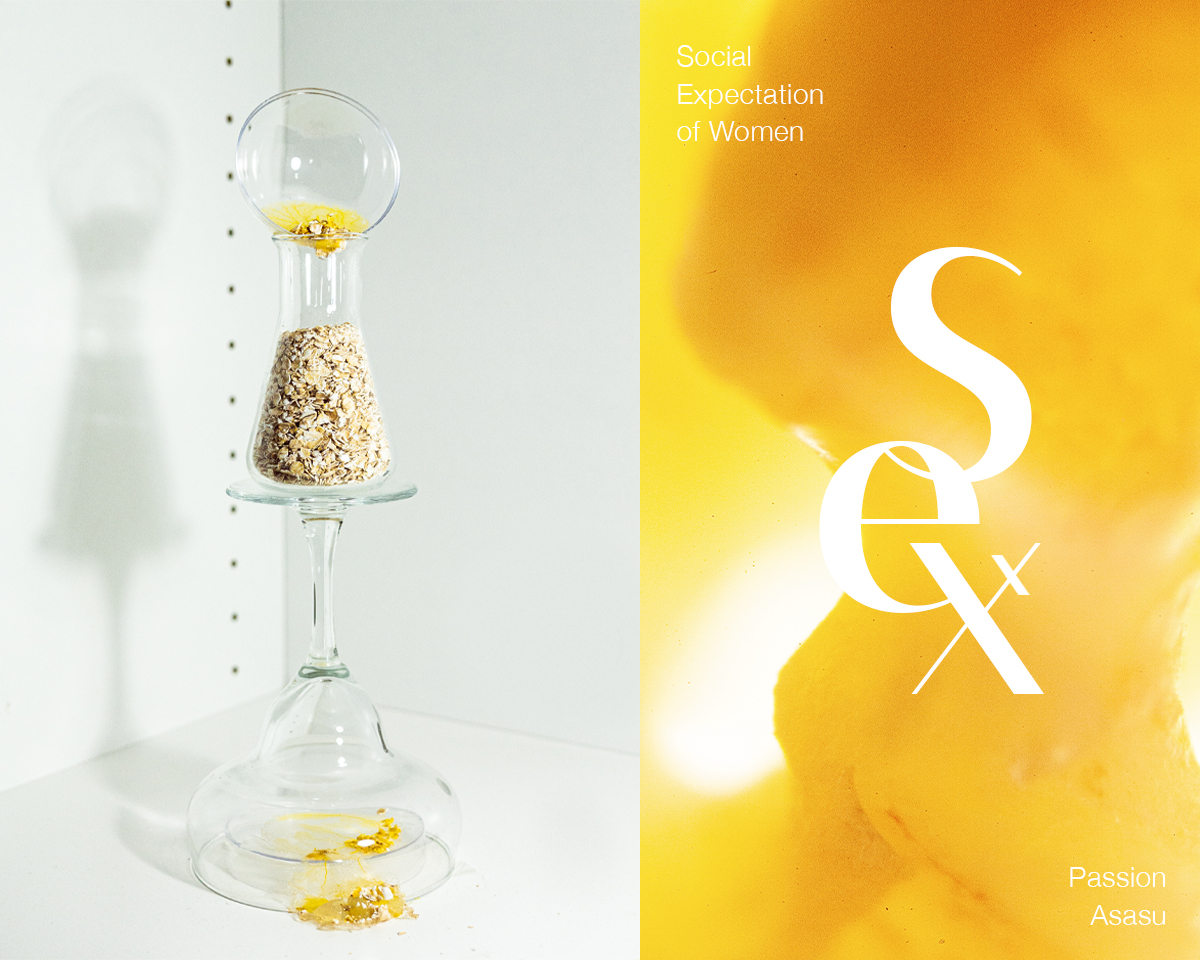 “SEXx (Social Expectation of Women)” is a project that reflects on woman oppression in our society which targets to point out issues that women are usually being judged and evaluated their values from their behaviours and expressions of desire especially when it comes to SEX. There are terms that use to describe women such as whore, slut, nymphomaniac. In opposition to men, who get to be called with much more positive definition such as romeo, cassanova or womenizer. In order to engage people understandings and make them indulge into the pool of those issues, the project creates an environment for visitors by using mixed media such as photograph, installation and video, for the audiences to experience the hidden issues that women are still facing in the society.

The project is inspired by the beautiful living form of Physarum Polysephalum (Slime Mould), an intelligent unicellular organism that can find the shortest path to access their food and avoid harmful environments. The visual act of slime moulds searching for food does not only portray the freedom of their desire for food, but also manifest the power of expression and decisiveness. The intrigued pattern of slime moulds when hunting for food inspired me to look deeper into the possibility of the new social norms. What if we, women, can finally express ourselves freely without being judged or evaluated, how pleasant of life could it be?

Before cracking the core of the norms, I firstly want to peel the shell by allowing us, everyone, to understand the difficulties of being limited in expression by using the natural performance of slime moulds to ironically represent the idea. There are two experiments conducted in this project, both of them shared the main idea of putting slime moulds into a controlling and challenging environment which firmly against their nature. Then, I observed their struggling patterns of not being able to access their food and documented them by photography and time-lapse, in order to convey the message of the project visually. The idea is to enhance the fact that we are diverse in every level and scale as well as other organisms, and we deserve to be able to release our passion and desire as free as possible. Otherwise, we will see this struggling pattern exists everywhere.

The project aims to increase sympathy, raise the standard of our social norms and slim down the inequality borders to allow women to express themselves as equal as other genders because we are all simply just the products of the nature.

Experiment No.1: I put slime mould in a divided container which has 12 holes, then put agar into the bottom of every hole and put slime moulds and oats separately and left some of the holes empty. Slime moulds can easily sense the food but in order to reach, they need to find the way to access through the empty space between the holes. I record the movement by using time-lapse, photography and microscope.

Result: Slime mould used little bridges between the holes to reach the oats and some of them moved downwards to the bottom of the container and climbed up to the holes that full with oats and some of them used the lid of the container as a bridge to reach the oats. The empty holes that are not in between the oats and slime moulds were not part of the journey which means slime moulds still chosen the shortest paths instead of searching every hole but the journey took a bit longer than usual. In the end, they could take over most of the oat holes and grew very big then dried out because of the lack of agar. From the observation, I can see the hard work in the journey, and it was inspiring how they creatively manage to find the way to the food in a difficult situation. 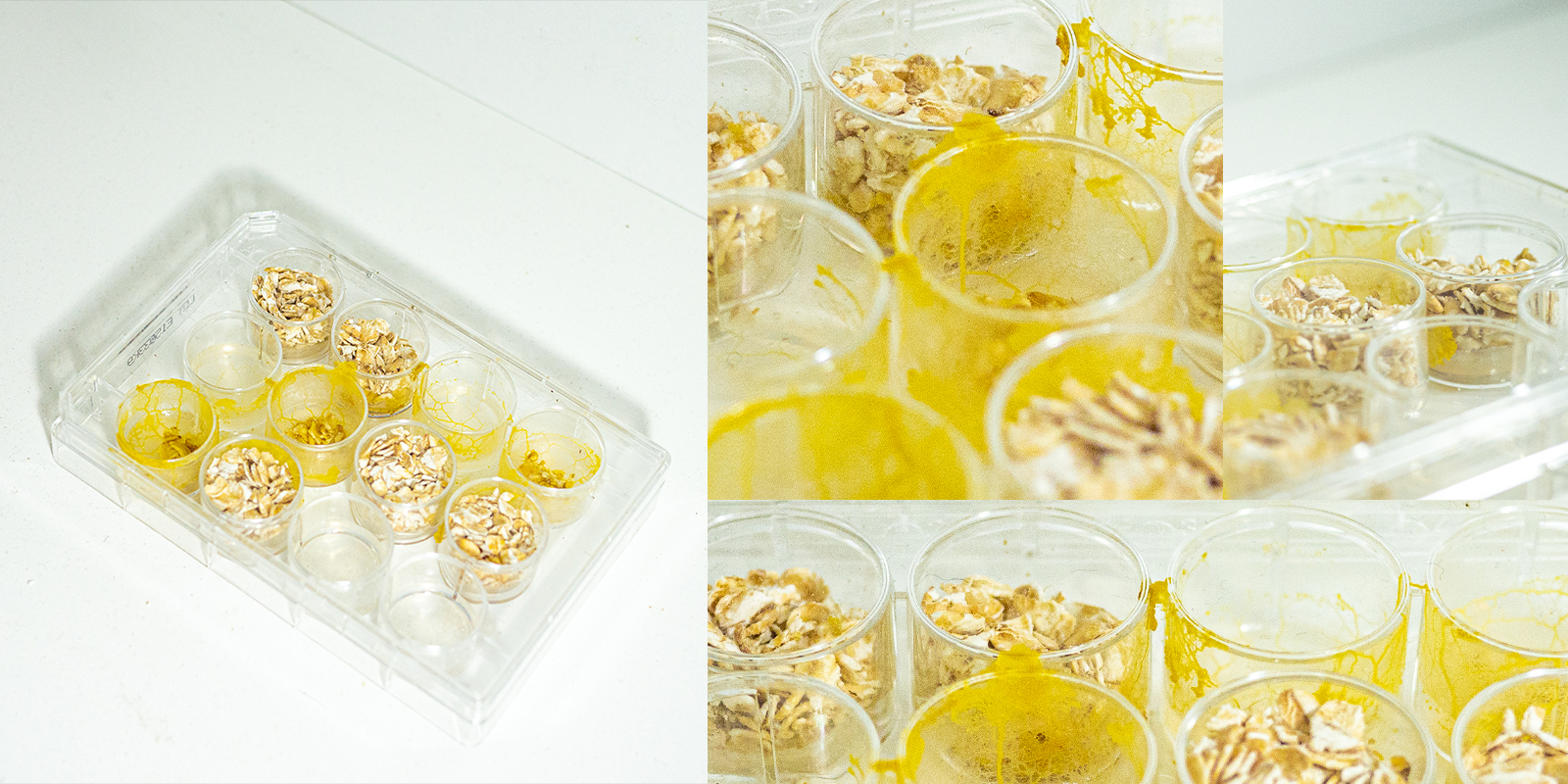 Experiment No.2: I divided 2 sets of slime moulds lied on agar layer in a different type of container: one set can access their food easily while the other set was under controlled environment that prohibited them from accessing food. Both sets were put together in the same installation that is also designed by its position to project the idea of sexual hierarchy. Not only to observe the result that one can perform their acts of desire easier than the other in compared, but also to reflect the image of women who are mostly stuck in the controlling condition at the bottom of our ongoing patriarchal society. I aimed to see different results of how each set trying to reach the food.

Result: slime mould in both set took longer time than the first experiment to move around, the set at the top which can freely access to the oats did not move towards the oats easily, my assumption is because the opened environment of the container made the habitat becomes too dry and not easy for slime moulds to live. The other set at the bottom grew faster until they reached the edge of the covering glass, I put some of them outside of the glass to see if they can climb up to the oats. However, they stopped moving once the agar is too dry and could not make it to the oats. What I learn from this experiment is, even the desire for food was still there but when the basic factor such as habitat cannot support them, it is impossible for them to even live. 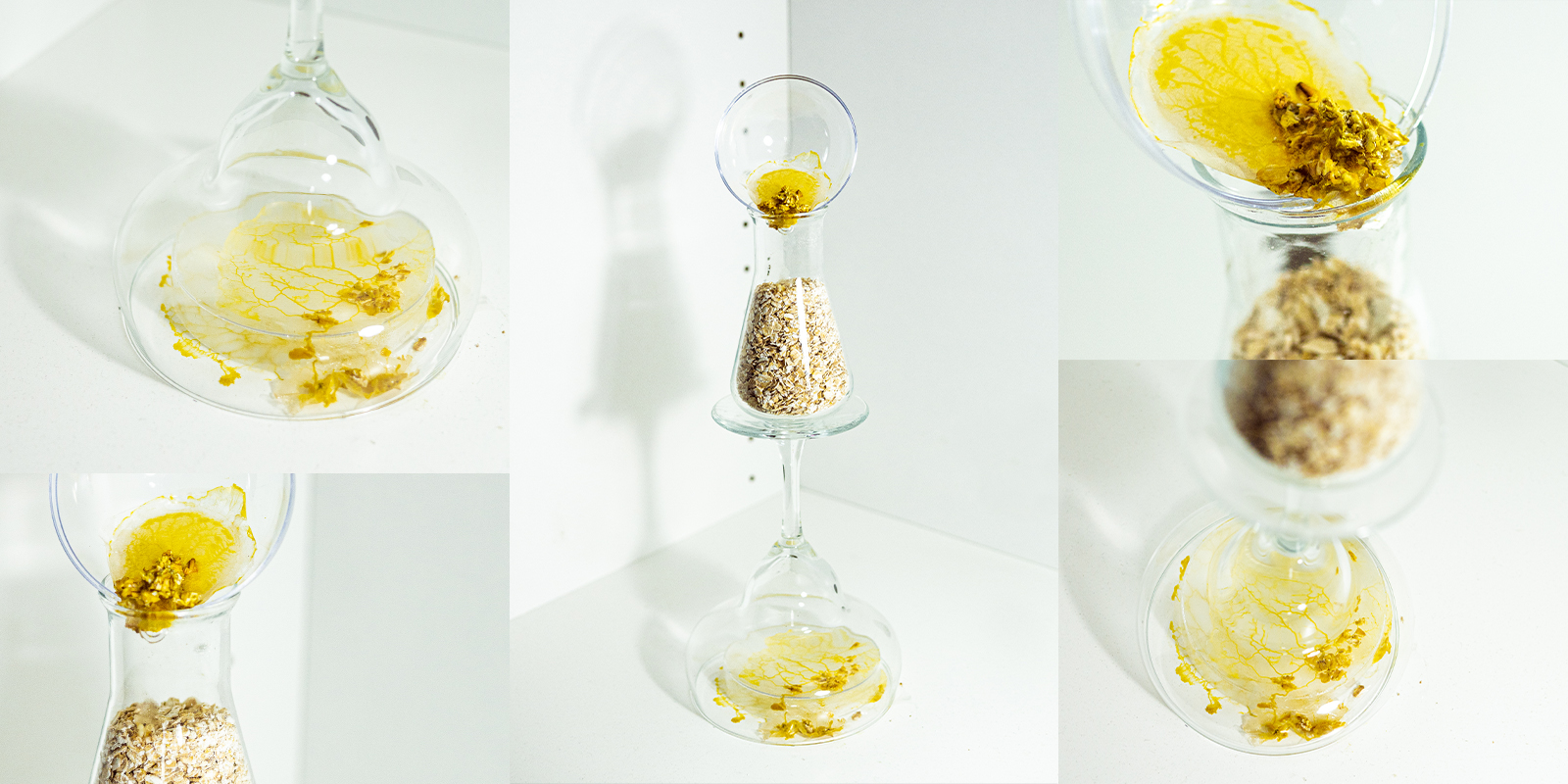 The struggling pattern that I expected to see before the experiments were not be seen the way I had imagined, however, it doesn’t mean that the slime moulds in both experiments did not suffer. The way that the experiments conducted already affects the freedom of living for slime mould itself. Some of them needed to go through a difficult journey, some of them needed to face a severe living environment. In the end, both groups dried out unnaturally in the containers that I put them in.

The outcome has affected my thinking process and the original idea of the project a lot. I was looking from the inside to the outside world and wanted to shout and make justice for women and somehow overlooked the fact that I am also part of our society and I might also be part of the problem that I was trying to solve. Thus, the experiments have opened my perspective to a wider level and also encouraged me to look back to myself deeper inside instead of only asking for acceptance from the society. Yet, I will continue facing and being against the injustice in our patriarchal system and the ridiculous norms that value women by our natural behaviours, in addition to that, I will also empower and encourage more from one woman to another beings regardless their genders in every level.

The project takes place in 2 rooms with high ceiling and 1 dark room. The first main room exhibits photographs of the two experiments, the photos are printed on transparent glass that can be seen through and from both front and back views. The photos are hanging from the wall on one side of the room. I want visitors to first get to know slime moulds and the idea of the project. The hanging transparent glassy photographs meant to make visitors feel light and open with the introduction of the project written on the wall. 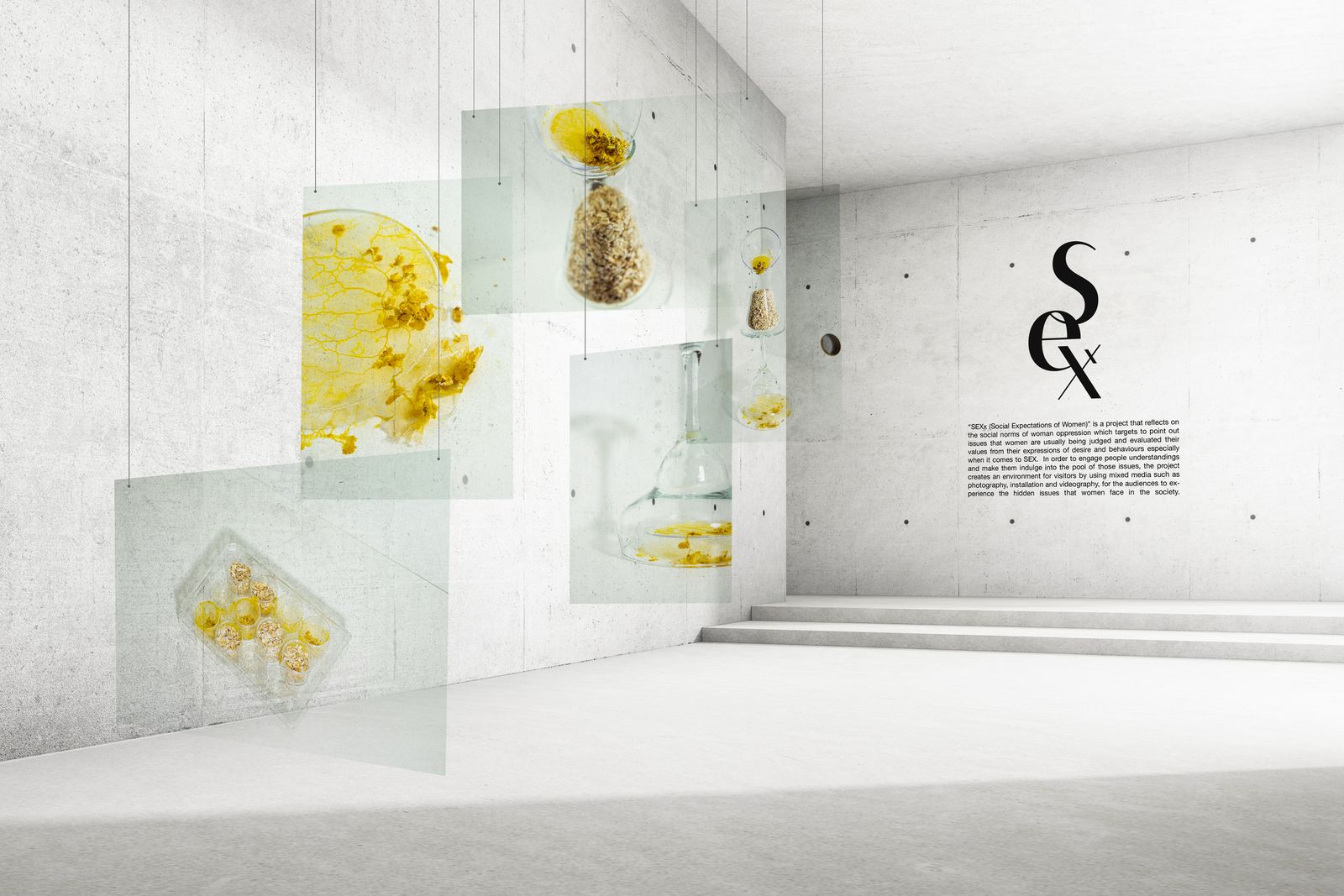 Then the second room with the high ceiling displays the video of the project on a four-meter hanging screen. I want the visitors to experience the beauty of slime mould, the small living organism that are captured by microscope displaying on a big scale screen which is almost 3 times taller than average human height. The contrast of the scale meant to raise awareness of those feelings, emotions, desires that are invisible voices in our society by metaphorically comparing them to slime mould in nature, without microscope, we will not be able to see them living. In the same way, without close attention and caring, we will not be able to see those invisible voices. At the end of the video, the roughness increases in the rhythm and visual which leads the visitors to the last room. 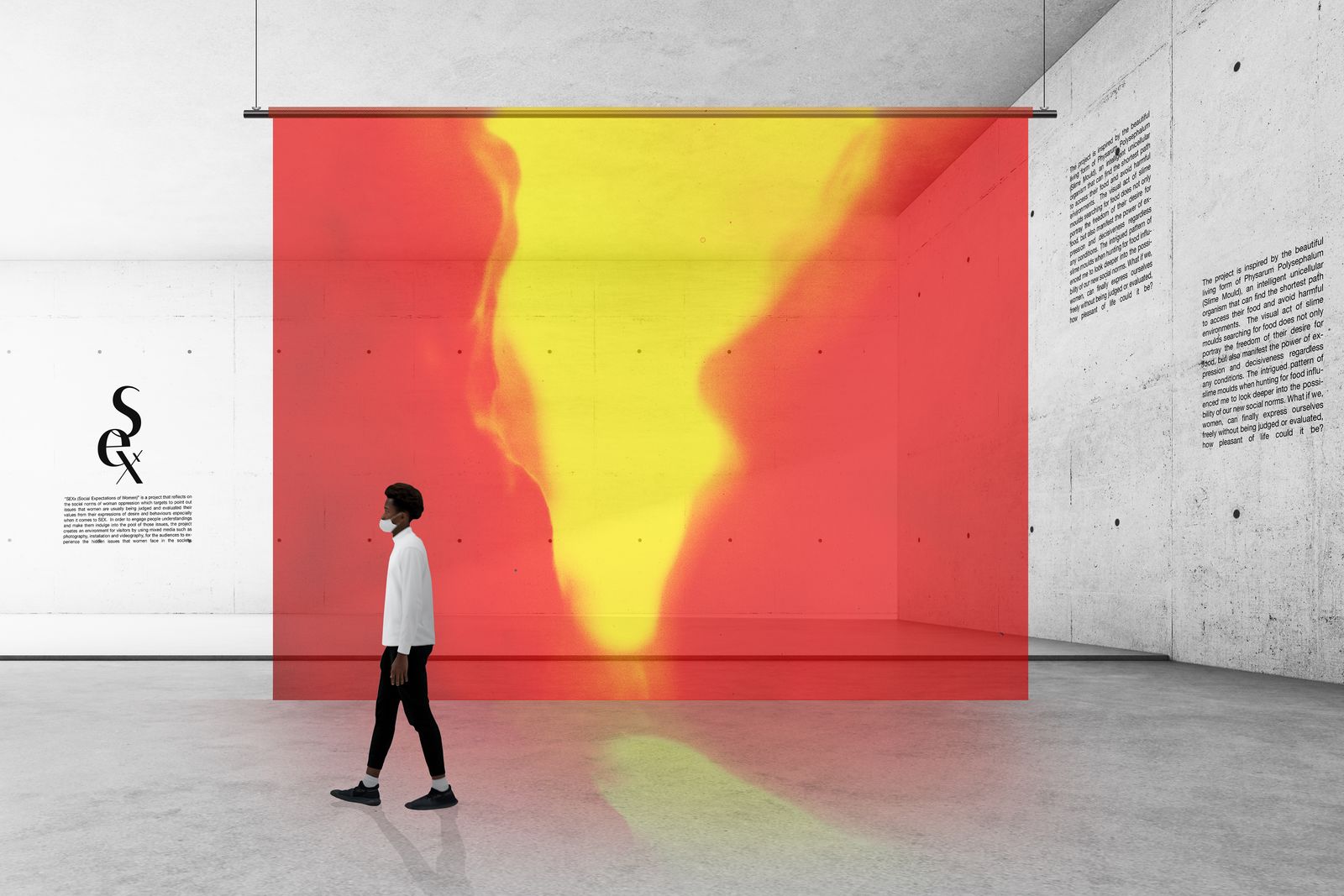 The last room contains microscopic photographs edited in black and white, some are attached to the wall, some are laid down on the floor. This room meant to create an environment that makes visitors to feel uncomfortable. I want to share the feelings of struggling, pressure, oppression and unwelcoming from women that still strongly exist in our patriarchal society. In the end, I hope to increase sympathy to these invisible issues and raise awareness of power that everyone has in order to end the cycle of this ridiculous norm. 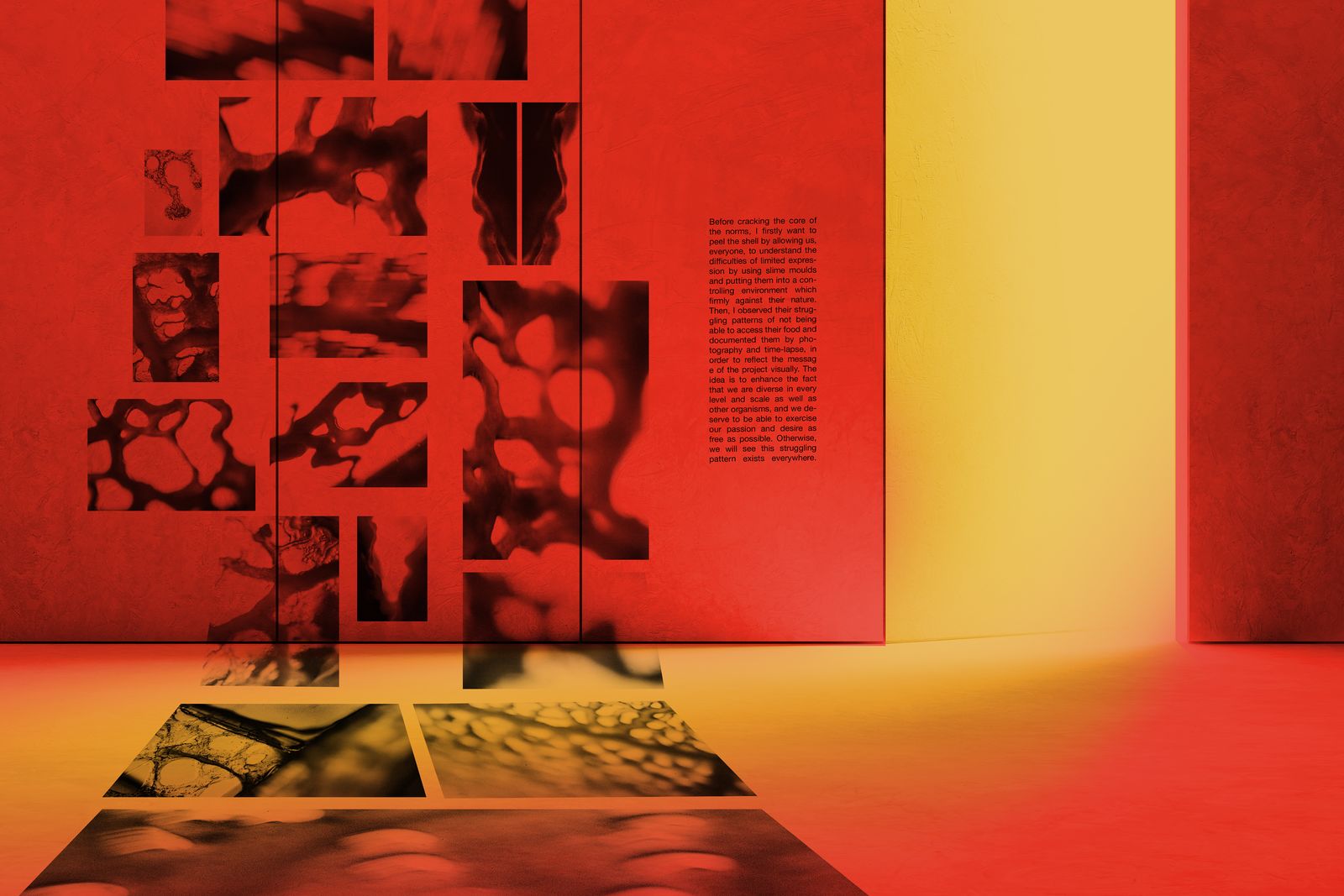 The video of the project that shows on the four-meter screen in the second room.