Self Stimulation of Physarum Polycephalum 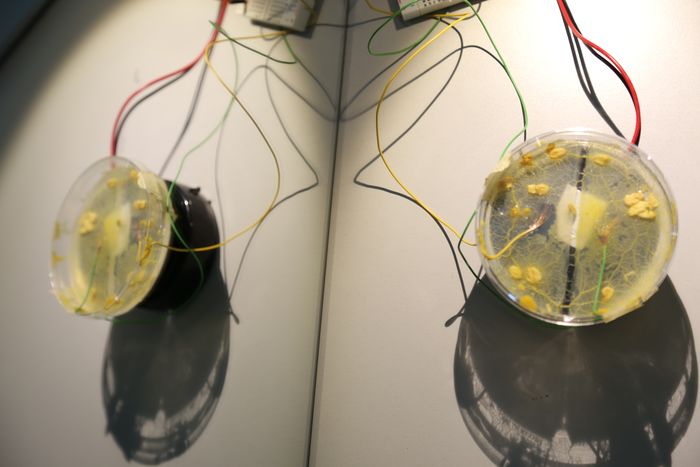 The result of an experiment with Physarum Polycephalum and electricity has shown that it is not only a good conductor, but does produce a very small voltage during its growth. The voltage again is oscillating in the pattern of the plasma flow of the organism. The produced voltage and its resulting oscillation needs to be amplified to be able to be used, then send to an Arduino, where the frequency is calculated. Eventually, the signal is send through Serial into Processing, where the frequency is converted to an auditive frequency that can be played on a speaker and a graph that is shown on a screen. At the end, with an exciter speaker, the audio is fed back to the slime mold, to stimulate it. Like a feedback loop, or a self stimulation it interacts with itself and immediately giving the signal back to the computer. 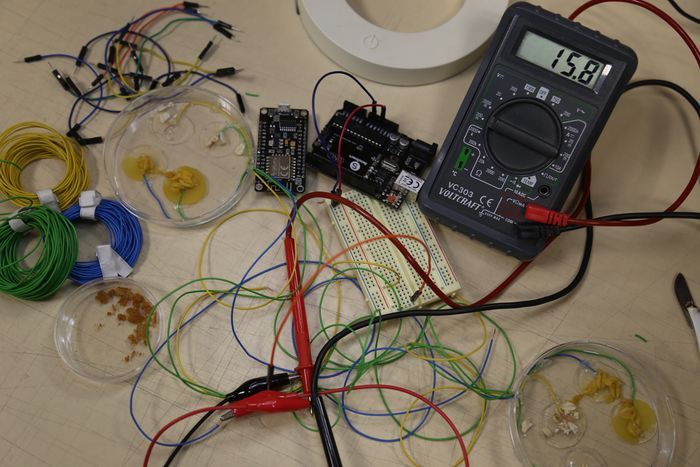 This work questions the feelings of organisms such as Physarum Polycephalum and how it perceives stimulation or even pleasure. Although it is stimulating itself, it does not know it does so and did not even give consent. It is a very speculative and philosophical perspective on the world of organisms that have no brain or what we describe as consciousness.

The installation is showing a laboratory setting, where a petri dish is prepared with agar medium and electrodes. The cables lead into a box or machine with a screen that is showing the graph, the aesthetics of the box can be compared to an oscilloscope. When the slime mould is growing it closes the circuit and the millivolts are produced between the electrodes.

Instructions to build your own Physarum Sound Generator

Connecting the Arduino and Amplifier 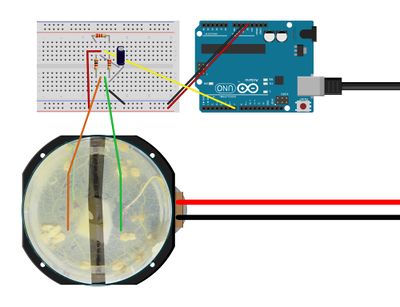 In terms of communication the internet has changed everything in our modern age. With cellular connections we are connected to our loved ones whenever and wherever we are. So why shouldn’t other organisms profit from this system? Do we know if there is a demand in the world of others? Or would they maybe even enjoy the freedom to be able to send signals to their peers?

Every organism has a cell communication to sense the environment, even humans do. As we are using a cellular communication to remotely talk to others, the cell communication in this case becomes cellular. In this experiment two or more Physarum Polycephalum(PP) are disconnected and isolated from each other and then reconnected by using an ESP WiFi module. An electrical voltage is measured from the organisms and then amplified. During the growth of the PP the plasma flow creates an oscillation in the voltage in shape of a sine wave, which can be used to stimulate the other slime mold and vice versa. This allows the two entities to communicate with their own electronic signals through a digital network.

In two separated fish tanks, a natural environment is created and prepared with electrodes to capture the voltage created by the PP. In between, the cables are running together in a machine, which displays the oscillation/pulses sent by each organism, before being sent to the other one.

This installation manifests the urge and exaggeration of communication living beings need and shows that not only humans can be interconnected by digital networks. But it also raises the question whether other organisms can communicate through electronic signals in a digital world.

First experiments to understand the organism

I’ve been trying to understand what’s good and what’s not so suitable for the growth of physarum polycephalum. I’ve been facing some issues during this strange ”relationship". The first intriguing thing the physarum did was when it “crawled” out of the petri dishes and connected to each other on my desk.

After witnessing this process I started isolating them and put most of them in a cardboard box. Then the same happened. After that I tried to feed them with leaves that fell off one of my plants after moving to Weimar. First, it was curious to see what it was but immediately stepped back from it. After that I fed it again with oats, but unfortunately they all got contaminated and either formed spores or mold. 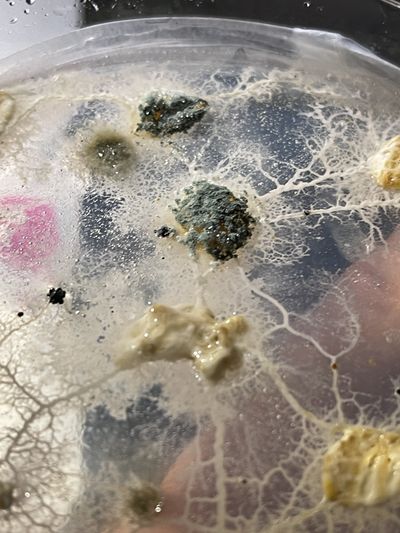 Another experiment was to see how the physarum conducts electricity. There were two problems I have been facing. One was that the voltage it conducted was in a range of millivolts. Second, the agar medium was also a good conductor, so my measurements were not very precise at that stage. Therefore, I transferred the to the cardboard to do experiments, but eventually they all „died“.

In this experiment, I want to find a way to let two physarums interact through electronic devices. Two physarums will be in separate containers, the only connection will be through two ESP32s that will capture and transmit the state or other indicators to the other one.

In my project I will be assessing physarum polycephalum to be used as a sensor. Every organism that contains water and minerals can be used as an electrical conductor and so does it work with physarum. Moreover, the behaviour of the slime mold will be captured through sensors to get a better understanding of it. After doing some experiments and understanding the organism better, the live captured data will be used to trigger something and kind of reward the slime mold to see how it reacts to it.