Being a Unicellular Organism

“Invisible fields” is about the effect that electromagnetic fields have on organic matter. The danger of electromagnetic-fields on the human body is an issue that has been the concern of many people since more and more radio-frequencies are used for communication and more and more electronic devices surround us. Electromagnetic-field are everywhere, but for most people they are forever unnoticed. In “invisible fields”, I want to make visible, that they have an effect on organic matter. For this I want to use E. Gracilis. Studies suggest, that when surrounded by electromagnetic waves, E. gracilis changes the movement behaviour. Of course this is not proof of the effect on the human body and such conclusions are not my goal in this work, I merely want to draw attention to this conversation and to our excessive use of technology, in which we lack an awareness about the dangers it might have on us and on the world that surrounds us. 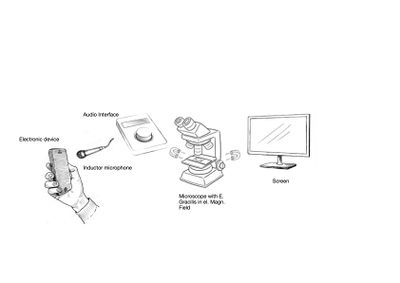 The installation could function as follows:

An inductor microphones picks up electromagnetic frequencies around an electronic device. This signal is made audible in a audio interface and is played out through a speaker The audio signal triggers the electromagnetic field around E. Gracilis (possibly by an Arduino) The camera that is attached to the microscope transmits the image to a screen and the change in movement of E. Gracilis can be observed in real time.This set-up could be build up as an interactive installation, or as a live performance. Here the euglena would be forcefully dancing to the music played on electronics

I haven’t had the chance to test the movement-change of E. Gracilis, so I am not sure how exactly, if it even works, the movement looks. Of course this visible change of movement is key in this work, so it needs to be proven first, before I can move on with this idea. Another issue is the translation of the audio signal into the electromagnet field. How will the signal effect the field? How can I translate the informations?

The concept could also be shown though a video:

The components would stay the same (inductor mic, Euglena subjected to electromagnetic Waves). In the video the reaction of E. Gracilis would be recorded and and would be accompanied by the inductor mic-audio, as a kind of music. Here the reaction of strong music=strong effect could be controlled quite well, with would make up for the lack of interactivity in comparison to the installation.

The solution as a video would solve some of the problems, for example the live transmission and translation of data, but it would also take away some of the credibility, because the medium can be more easily manipulated. But because the effect can be more clearly shown, maybe the topic would brought to the observer in a clearer way.