"How can the way we make the tabs better representing the pages?" 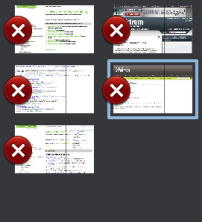 Functions: Tapping on non-framed part of the image makes the respective page appear. Tapping on the area enclosed by the red frame causes the tab to close. This area has currently (1.1 alpha) a width of 57px which makes e.g. 6mm on a N800 or 9mm on an iPhone (on which FF Mobile not runs!).

The favicon was included though few people remembered logos in the #Study. This was done because the favicon is often a good color-clue which means it includes the typical colors of the page it represents (though not always, e.g. [www.mozilla.com mozilla]) If a page is well known (the most user did only know few pages from the set) it is more likely that they "learned" the favicon and can use it as efficient retrieval clue.

(Discussion of the wireframes is in the same order: from top to bottom.) 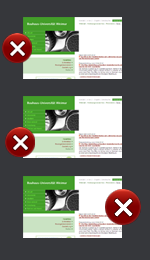 Move the button down

Move button to the right edge

Concept: Choose a better crop of the page as thumbnail. Actually it already works pretty well, since mainly the upper left corner is present due to the small screen of the mobile devices. In my tests a 480px height crop seemed to be decent (the height is more important, since distinctive visual features are often located on the left side)

Note:It is likely that the favicon itself is hard to recall for non-frequently used pages. But it often gives color clues for the page. (Further research is needed)

Provide a "recently closed" button at the "new tab"-view for retrieving closed tabs.

Preview pages while finger down, open when up (deferred)

But try for yourself: Flash Prototype

I think that this approach is not bad but it will start to perform good with greater item quantities.

...is to find out what people can recall about websites they visited previously (about 2-10 Minutes ago)

Participants had do do simple tasks on several webpages. After a masking time of a couple of minutes filled with other tasks, they had to tell about the features that they link with the webpages. 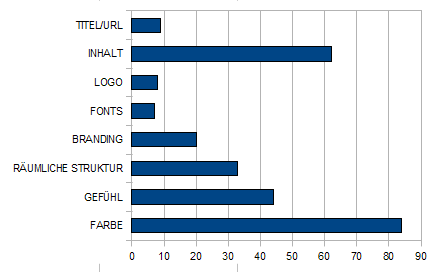