Bipolar transistors have 3 terminals - Emitter, Base and Collector. In most circuits we are using the base as "input" - the Emitter and Collector act either like a variable resistor (or like a switch).

The emitter follower - also called the "Common_collector" is a circuit where the output voltage follows the input voltage (therefore the name). While the input current can be pretty low the current through a load can be much higher - which is one of the main applications of this circuit.

The emitter follower comes handy whenever you have a tiny voltage source that isn't capapble of delivering a desired current for an application and you want to amplify that. Using an extra voltage supply and a transistor you can do this. For example a potentiometer can deliver a variable voltage - however as soon as you use a current from that voltage divider the voltage will drop rapidly which is not intended. An emitter follower will elegantly solve this problem in many cases. Have a look at the picture: Connect the output of the voltage divider (or generally the weak voltage source) to the base of the transistor. Then then the load you want to drive (for example a motor) is put between ground and the Emitter. The supply voltage is connected to the collector of the transistor. If you now adjust the potentiometer to deliver 0V the motor is off. If you turn it all the way up - giving us for example 5V the motor will also get approximately 5V. At the center the voltage divider gives us 2.5V - the motor will also have approximately 2.5V. In reality there's a little voltage drop depending on the transistor's material. Silicium transistors will take approx. 0.7V - so the maximum is only 4.3V. Also when your input voltage is below 0.7V, the output remains almost zero all the time. If your application doesn't allow this better us an operational amplifier (opamp).

An important property is the independance of the supply voltage for the load. If your input is ranging from 0 to 5 - the output will do the same - no matter how high the supply voltage is. The remaining voltage above 5V will just be wasted in the transistor and create heat - intended or not.

Firstly - don't confuse it with the emitter follower because of the similarity of the name. This circuit is useful to switch loads on and off by a small control voltage. The name is derived of by its electrical connection. If you have 10 of these circuits all emitters are connected together - they have a common terminal for their emitters.

The common emitter amplifier is mainly used to switch a power hungry device on and off using only a weak control signal (hungre devices: high power LEDs, motors, ...) For example an Arduino digital pin is capable of a 40 mA current. 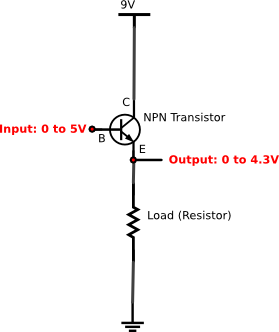 Emitter follower: The voltage on the output follows the voltage of the input. Higher supply voltage does NOT cause higher output voltage! 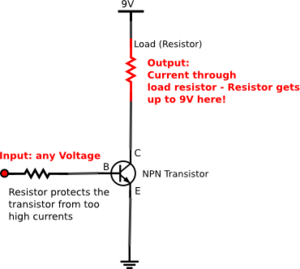 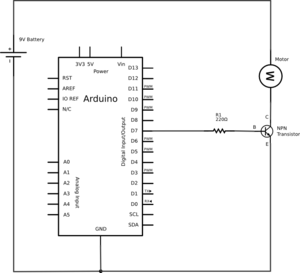 Example of an emitter circuit to switch a Motor on and off using an Arduino output. 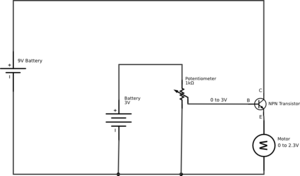 In this example the output voltage only goes from 0 to 2.3 V - the 9V Battery isn't needed for that and could simply be replaced by a connection to the 3V Battery.
Retrieved from "https://www.uni-weimar.de/kunst-und-gestaltung/wiki/index.php?title=Crash_Course_Electronics/Transistor&oldid=41873"
Categories: