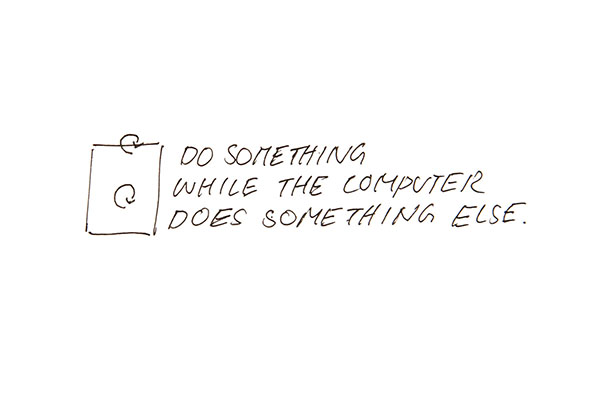 The Performance Platform inside the Digital Bauhaus Lab at the Bauhaus-University in Weimar is a high end technical device.
It is designed to function as a laboratory in which both interactive and performative ideas and visions can be tested.

Apart from the advantage for artistic and scientific research the Performance Platform as such constitutes a significant site
of our physical reality. This sight in itself is rather curious and powerful at the same time. In addition it represents our temporary
thoughts on questions referring to performance and interaction in contemporary art.

But what are the particular ingredients that make interaction happen?
Can interaction take place inside a technically controlled system?
What happens, if it is left to itself? What will be left after excluding its actual purpose?
Who decides What, What or Who implies power and control over what/whom?
What is our relationship to a system that only a few specialists can analyze in its inner functions?

This project deals with these and similar questions by setting up individual „interventions“.
These interventions are formulated as instructions - they animate to take action. 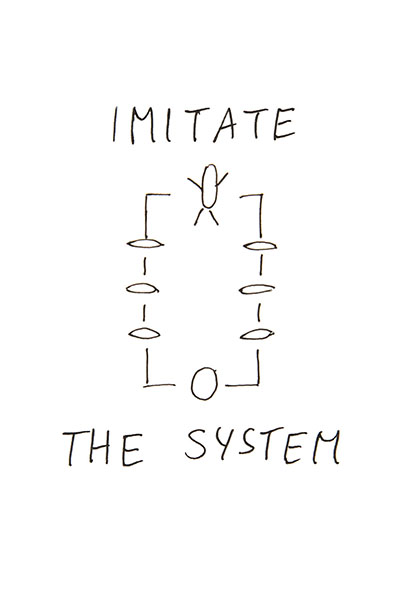 The Performance Platform inside the Digital Bauhaus Lab is composed of twelve cameras, a recent computer system and a multichannel high-resolution video wall.
The cameras surround a rectangular space defined by specific flooring material.
They are linked to the computer system that collects and transforms the image data which is then sent to the video wall for different kinds of visualization purposes.

„Intervention #1 : Imitate the System“ tries to break this technical system down to basic human sensing, translating and acting skills.
Every technical part of the Performance Platform is thereby represented by a group of peoples.
Each individual group has to deal with sensual limitations that correspond to the particular function of the allocated platform part.

In this version of the experiment the whole system is based on the method of „chronologic one way communication“.
This means that any sensual reception is perceived, memorized and finally transferred to the systems „next layer“ (next group of peoples / next technical part).
Any transfer of memory is represented by either verbal or physical action which then builds up the base for the next level of memorization - that provides the base for
another layer of action - and so forth.
The whole process starts with a „model A“ that defines the first level of perception and memorization.
Everything results into a transformed version of „model A“, a „model *A“ after the perception, memorization and action process of each individual group is finished.

- differences between „model A“ and „model A*“

=> efficiency of a „human machine“ / differences between human and nonhuman strategies

- new ideas and suggestions that come up during the experiment

3.) Six „eyes“ surround „model A“. They observe and memorize its pose from a fixed perspective.

4.) „Model A“ leaves the room. „Brains“ enter and join their respective „eye-partner“. Memories are transferred.

6.) „Hands“ enter. They join their respective „brain-partner“. Memories are transferred. 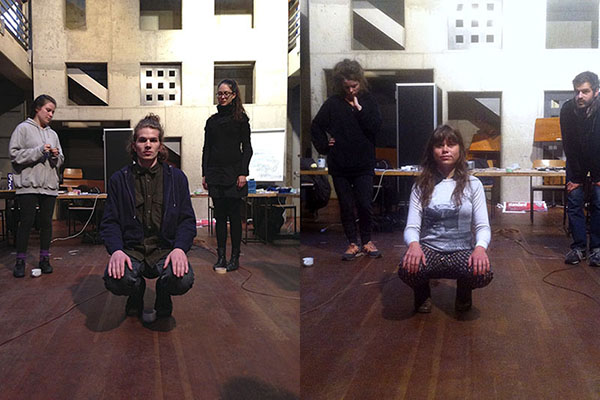 In the end a group discussion took place. The following changes were considered:

1) Not only one „model A“ but maybe multiple models. The exact position in space will be different from each perspective.
Relations between the individual models will be visible.

2) Each perspective could be more exact. The transformation process could change / become more difficult / more precise.

3) Question: all „hands“ at once, or one after the other?

4) Everything at once (simultaneously)?

5) Restriction of senses: who is allowed to speak? To act? To listen? To see? 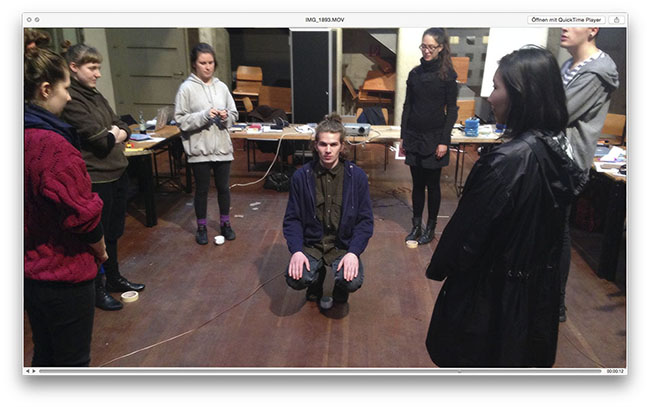 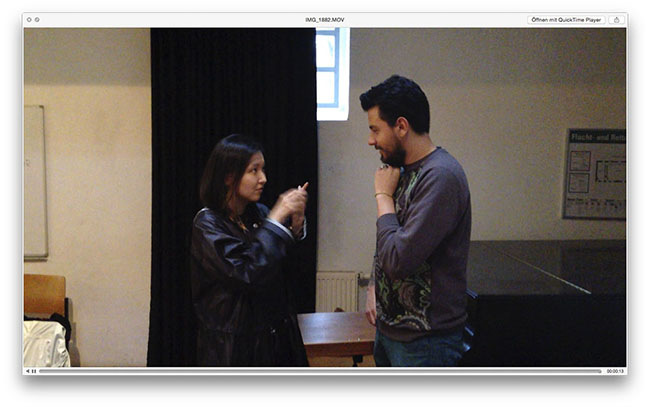 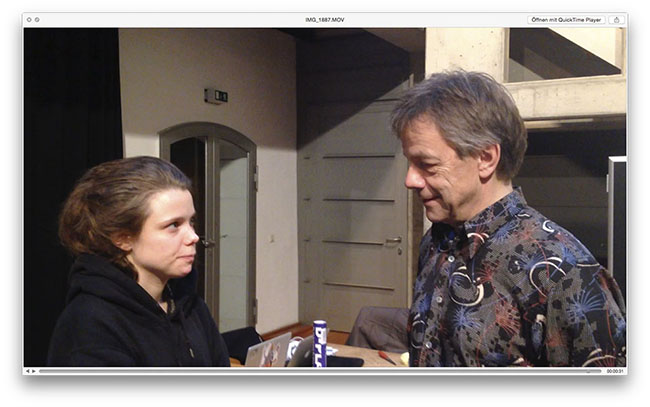 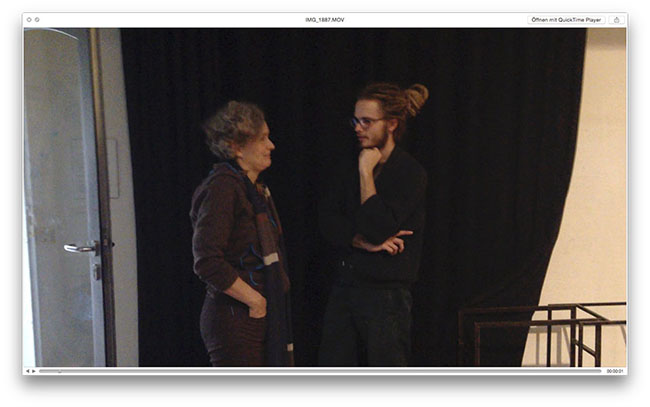 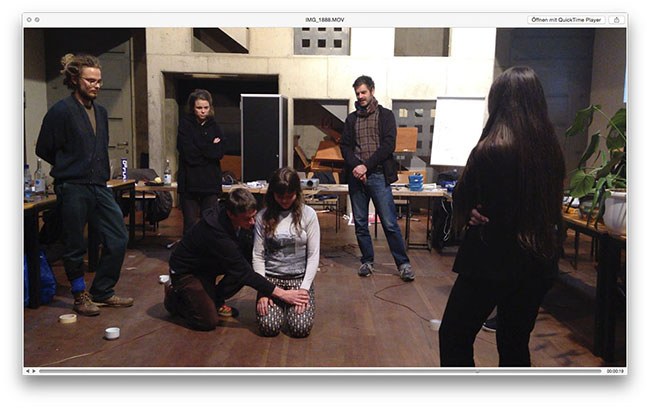 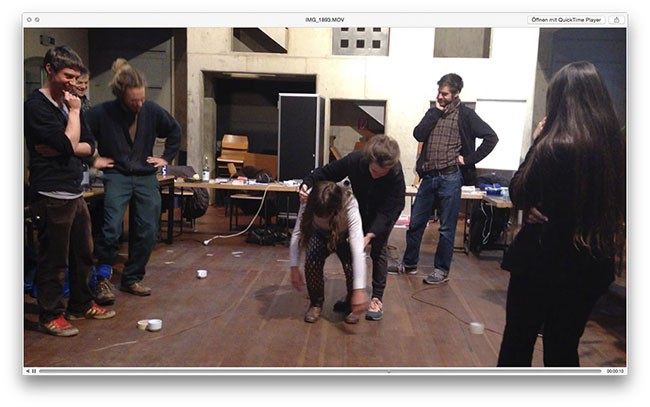