Conception
36 million people starved to death in the three years of the Great Chinese Famine, but any monument or memorial is forbidden in China. So I want to tell the story in virtual environment, set virtual monuments for the people dying in this period.
Monuments are arranged in matrix, with the data and texts chosen from a documentary literature “Tombstone” randomly (Fig. 1). When people experience the environment with a head mounted device, the monuments rotate and always face to the person (Fig. 2), which seems that the history is eager to be seen.Getting close to a certain monument, the visitor can hear someone is reading the text. At the same time, it simulates the visitor’s heart beat with the wave on the top, which reflects the mood swings.Height of the monument depends on the BPMBeats per minute(beat per minute) data collected from the person with pulse sensor.


Interface
Visitor wears a htc vive glasses connected with computer and running a application developed by Unity. A pulse sensor and bluetooth module are attached on the visitor’s arm with arm band, which can collect and deliver the pulse data to the computer.Then Unity get the human data and generate changes of models with script (Fig. 3).

Background
36 million people starved to death between 1958-1962 in china, which called The great Chinese famine. It was caused by a combination of adverse weather conditions, social pressure, economic mismanagement, and radical changes in agriculture imposed by government regulations(Collectivization of Agriculture and the Great Leap Forward). Any kind of memorials, discussion or study on the topic are forbidden in china even now.
“Tombstone : The Untold Story of Mao's Great Famine”- first documentary book wrote by Chinese journalist Yang Jisheng, describes the event in detail and is filled with large number of shocking data collected from his field investigation and reports.
https://en.wikipedia.org/wiki/Great_Chinese_Famine/


2.connect pulse sensor with Unity
A test was done, in which the pulse data collected from person is used to control the angle of blocks in Unity. 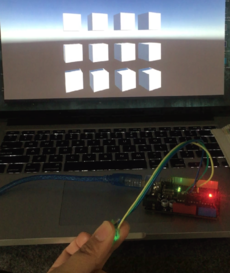 
The monuments change angles and always face to the visitor.Here I use tangent trigonometric function.


Some texts from “Tombstone” 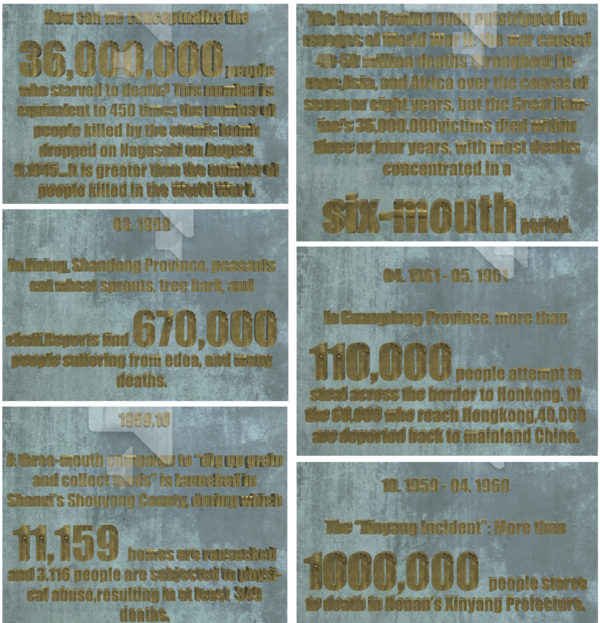 1956.1
The Supreme State Conference on January 1956, passes “The Program for Agricultural Development from 1956-1967.” Mao Zedong says China will overtake the United States in steel production.
1957.11
Mao leads a delegation to the International Congress of Communist and Workers’ Parties in Moscow, where he says the China will catch up with or surpass the United Kingdom in 15 years.
1958.6.22
Mao comments,” Surpassing the United Kingdom will not take fifteen years or seven years, but will only need two or three years, especially in still production.”
1956.12
96.3% percent of the peasants population has joined cooperatives, and the socialist transformation of industry and business is completed.The abolishment of private ownership and the establishment of a comprehensive planned economic system allow the state to monopolize all means of production and all means of livelihood.
1957
During 1957 the Anti-Rightist Movement proceeds in the cities, while the Socialist Education Movement proceeds in the countryside. Ultimately more than 600000 intellectuals are persecuted, and dissenting views are effectively eliminated.
1959.1.27
The Guangdong provincial party committee submits a report stating the food shortages result from “false reporting of output and private withholding by the production teams and units.”
1959.2
Mao writes lengthy memos on February 1959, that give rise to a nationwide campaign against “false reporting of output and private withholding.”
1959.3
In Jining, Shandong Province, peasants eat wheat sprouts, tree bark, and chaff. Reports find 670,000 people suffering from edea, and many deaths.
1959.10
A three-mouth campaign to “dig up grain and collect funds” is launched in Shan xi’s Shouyang County, during which 11,159 homes are ransacked and 3,116 people are subjected to physical abuse, resulting in at least 349 deaths.
1959.10-1960.4
The “Xinyang Incident”: More than 1 million people starve to death in He nan’s Xinyang Prefecture during October of 1959 to April of 1960.
Winter 1959 to spring 1960
The “Tongue Incident”: Gansu’s Tongwei County loses a third of its population to starvation from the winter of 1959 to the spring of 1960.
1960
The number of starvation deaths in the Great Famine reaches its peak in spring 1960 during the gap in food supply between the planting and harvest seasons. Known cases of the disaster include the “Zunyi Incident”( in Guizhou Province), involving massive deaths and cannibalism, and the “Luoding Incident” (in Guangdong Province), during which more than 17,000 people die within a few months.
1961.4-1961.5
In Guangdong Province, more than 110,000 people attempt to steal across the border to Honkong. Of the 60,000 who reach Hongkong, 40,000 are deported back to mainland China.
1961 spring and summer
More than 60,000 residents of the border areas of Xinjiang’s Ili Kazakh Autonomous Prefecture flee to the Soviet Union with their families, livestock, farming implements, and vehicles during spring and summer in 1961.
1961.7
Mao insists on maintaining a collective economy.Afterward on July 1961, at his swimming pool,Mao asks Liu Shaoqi, “Why can’t you keep things under control?” Liu retorts, “History will record the role you and I played in the starvation of so many people, and the cannibalism will also be memorialized!”
I originally intended to title this book “The Road to Paradise”, but eventually changed it to “Tombstone”. I have four reasons for choosing this title : the first is to erect a tombstone for my father, who died of starvation in 1959; the second is to erect a tombstone for the 36,000,000 Chinese who deeded of starvation; and the third is to erect a tombstone for the system that brought about the Great Famine… Around 36,000,000 starvation deaths in China from 1958 to 1962. Because starvation also caused a drop in the birth rate, there was also an estimated shortfall of 40,000,000 births in China during those years.
In some regions, nearly every family experienced at least one death from starvation, and some families were completely wiped out.Entire villages were left without a single living inhabitant.It was as Mao Zedong wrote in one of his poems: “ A thousand villages overgrown with weeds, men wasted away;Ten thousand homes where only ghosts sing.”
How can we conceptualize the 36,000,000 people who starved to death? This number is equivalent to 450 times the number of people killed by the atomic bomb dropped on Nagasaki on August 9th, 1945… It is greater than the number of people killed in the World War I.
The Great Famine even outstripped the ravages of World War II: the war caused 40 to 50 million deaths throughout Europe,Asia, and Africa over the course of seven or eight years, but the Great Famine’s 36,000,000 victims died within three or four years, with most deaths concentrated in a six-mouth period.