Difference between revisions of "Marie Ebel"

In this class, I aimed to keep exploring and working on the project I initiated last semester. The conclusion that I drew out of that first attempt is the obvious duality between the objective science and subjective feelings.

I signed up for MyHeritage online company. My previous researches provided me a solid background in that matter, which allows me to suspect the very unprofessional and speculative work of those companies. I was curious to know and confront my personal knowledge with the work of this company, leader in that market.

Once I ordered my kit, I received the package couple of days later. My first impression regarding this is the fact that the marketing part is going over the scientific professionalism. It is absolutely well designed, with nice colors and graphics.

Another critic that must be made is the huge confusion between ethnicity, nationality, regionalism, and religion. Basic common sense suffices to read the inaccuracy of this work. 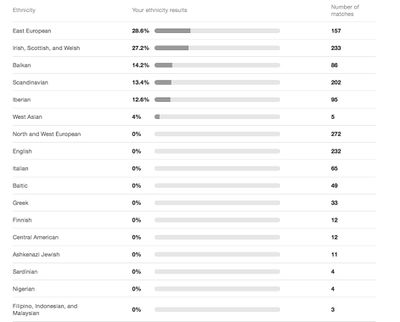