With footage of a current hour discussion in the German parliament Bundestag, about the topic climate change and video material of forest fires and floods, I created a video work regarding to the climate situation and the political changes in Germany and the world. Therefor I used different techniques to edit and manipulate the audio and video footage. The destruction of the material, reflects the situation of the climate debate. While politicians of different parties are discussing, the forest is burning and whole regions are flooded. Thousands of humans, animals and plants were allready made to victims of the incompetnecy of the human race. It is the job of politicians to discuss and finde solutions but our time is running out and we need a change, now! The ambiguity of the titel leaves an open space to see the video work in a more political context. If we are not aware of the situation, not only our forest are burning.

One of the first steps was to check if the subtitle srt. file, which I downloaded from downsub.com, was correct auto-generated. For this I combined the video material of the Bundestag and the fitting subtitle file, with the help of the free to download software Aegisub (screenshot one). After checking the subtitle file, I opened the srt. file in the code editing environment Visual Studio Code, which gave me a nice overview of the time codes and the subtitles (screenshot two). Parallel I imported the video in the free to download software Shotcut, where you can easily edit video and audio material and exported a mlt. file with the whole one and a half hour long video of the Bundestag debate. Then I transferred the exported mlt. file from Shotcut to Visual Studio Code. The next step was to search in the srt. file for the word “Klima” in English “climate”. If I found the word in the subtitles, I copied the relevant time code into my main bin producers list of the mlt. file (screenshot three). I imported now the mlt. file into Shotcut and got instantly all the clips delivered where the word “Klima” was spoken. After some final touches regarding the length of sentences, I had a supercut montage of the Bundestag debate based on the word “Klima”.

With this sausage list of climate words, I moved on to the converting software AvideMux 2.5 and moshed the video by deleting all the I-Frames (screenshot four). You can find a step by step manual for data moshing further down on this site. I took the data moshed video material and did the last editing decisions in the program Premiere Pro CC 2018 from Adobe, where I added the second visual layer of forest fires and floods, by keying out the gray spaces, which the data moshing created. I also edited the sound, you can here multiple times the same audio track but every track has a different pace and effect and some of them are even reversed. Finally I created a title and credits and exported the video in H.264 quality.

4. Save the video anywhere

6. Delete now all the I frames except the first one

7. In the video drop down bar change from MPEG4 – Asp (xvid) to copy

8. Save the video anywhere as a new file (Its an AVI File so you need VLC Player for playback)

9. To use the Video in Premiere Pro convert it with VLC Player to a mp4 file or use: https://video.online-convert.com/convert-to-mp4

User interface of the software Aegisub with the full Video of the Bundestag and the fitting subtitle file. 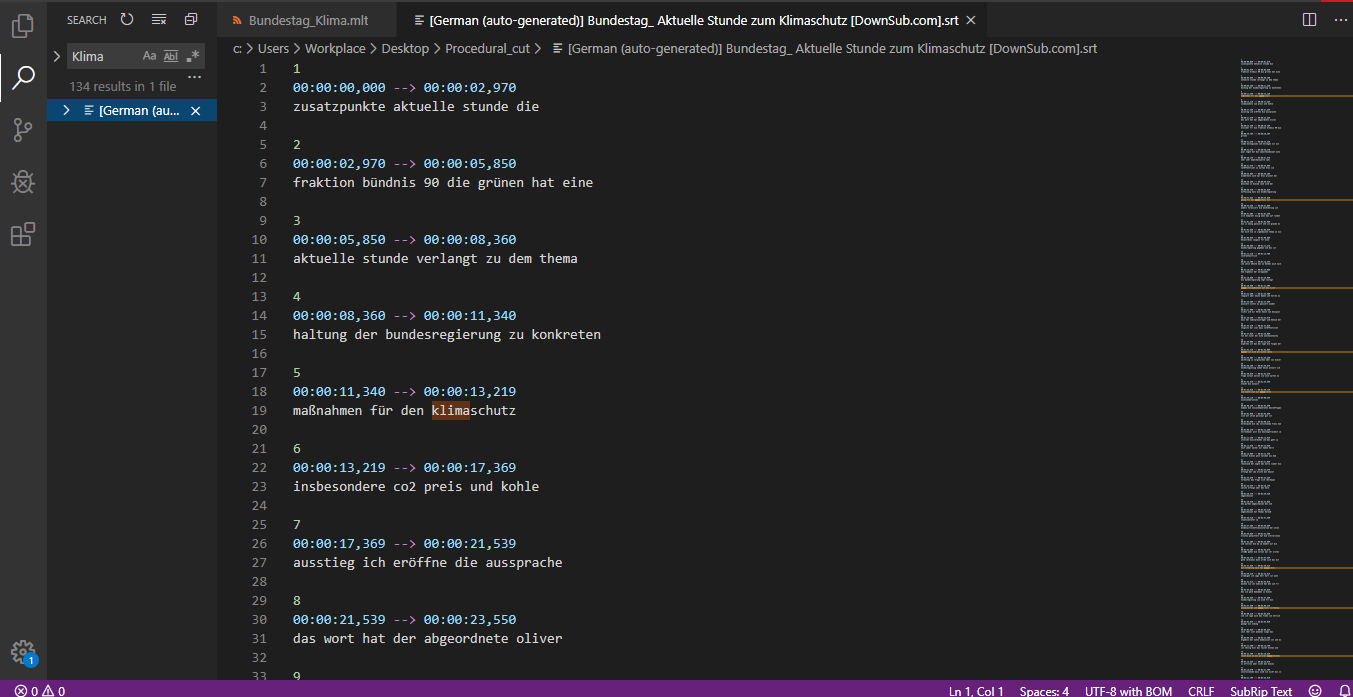 Code of the srt. subtitle file with time code and marked word "Klima" 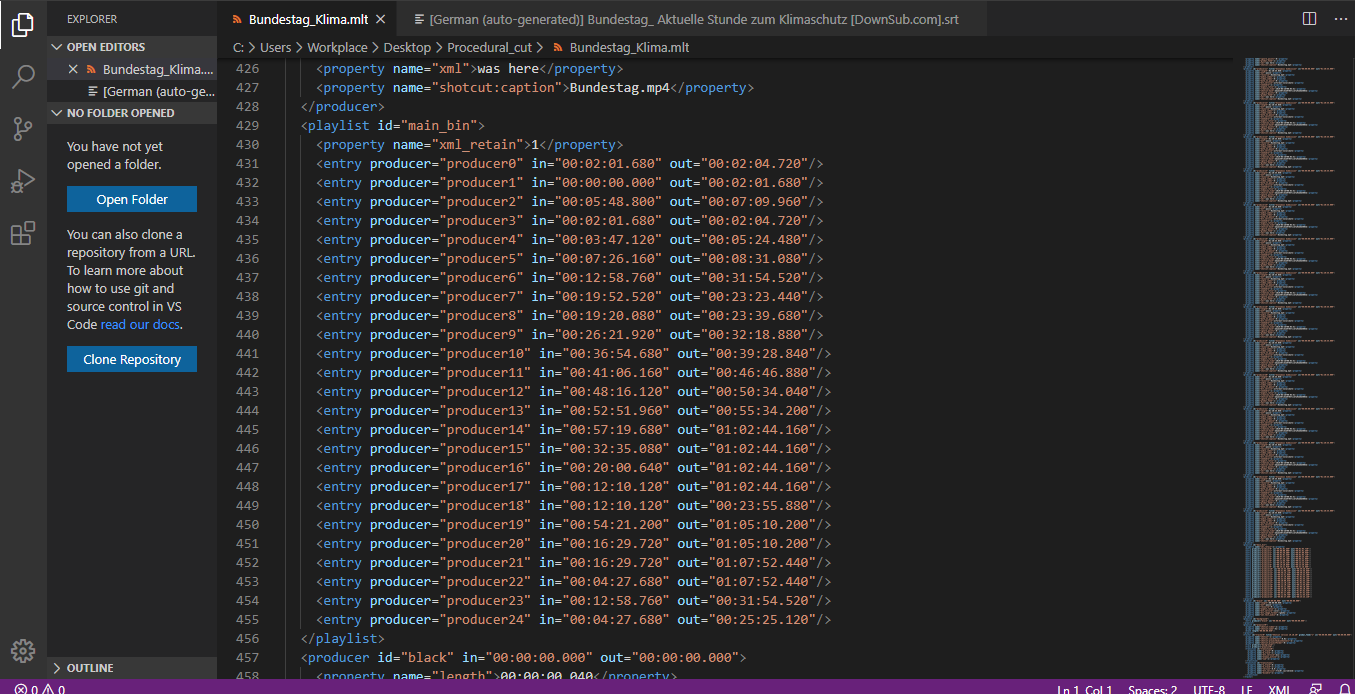 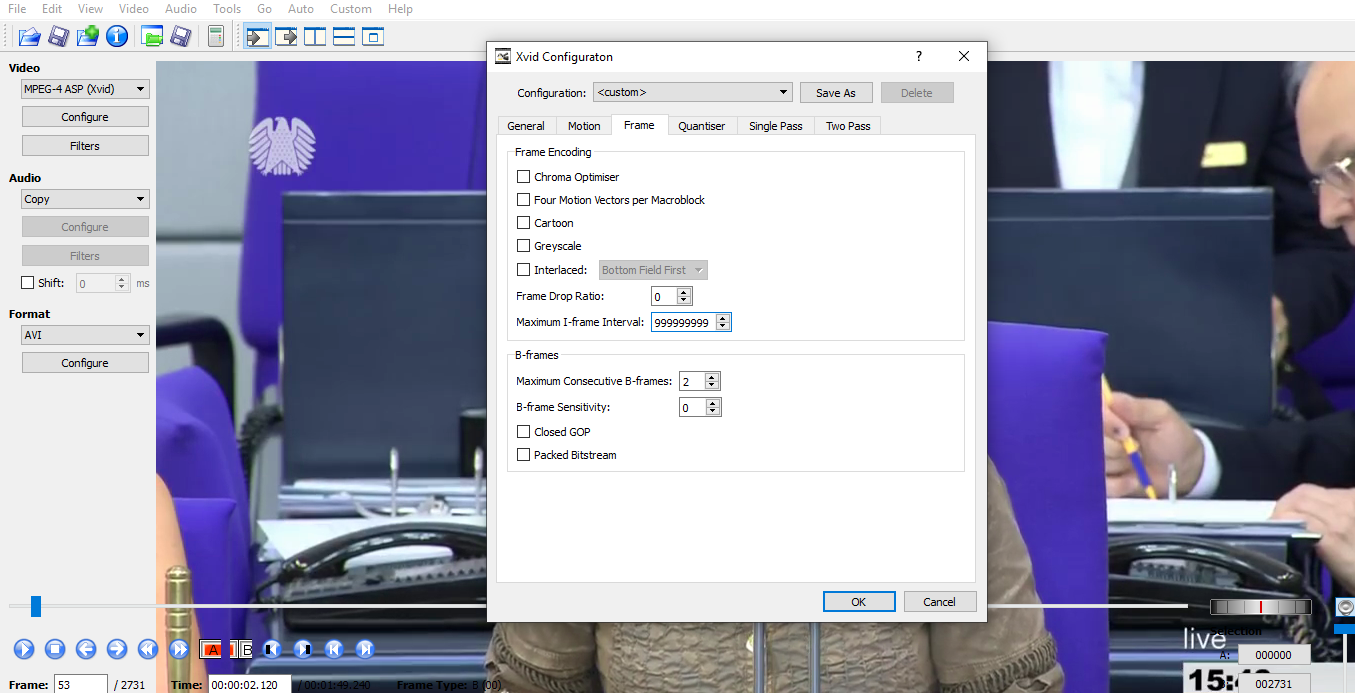 User interface of the software AvideMux 2.5 with opened configuration menu, setting the I-frame interval to 999999999999.

Screenshots out of the video work 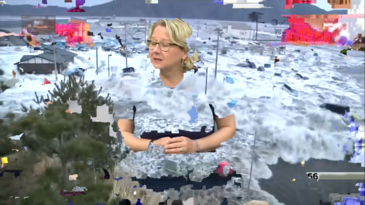 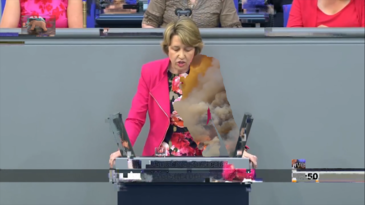 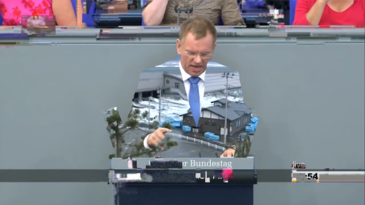 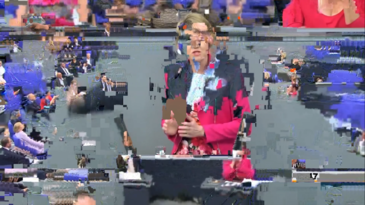