DJglove is a device than can be used to control different parameters that will modify a sound track through different filters and echo effects. The idea is to control all the different options just by touching the different metallic stripes that cover the glove, applying a particular effect with every different touch. The glove is controlled through an arduino board and wired to it through the analog pins 0 and 1. The first idea was to have a wireless glove though, using a wireless board like a node mcu or simillar board with wifi/bluetooth connection. 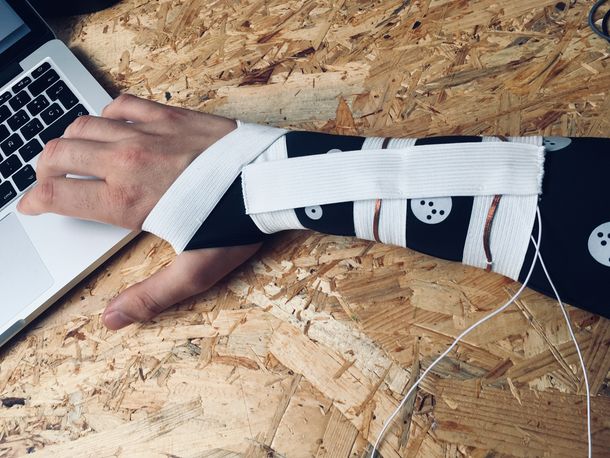 The glove is made using elastic bands, that will allow a better fit to the forearm. The bands are sewed following a ring pattern that covers the upper part of the hand, the wrist and the lower part of the arm. On top of these elastic bands, rings of metallic band are sewed, creating a wearable switch that is meant to be closed with another wire connected as well to the arduino board.

For the MAX patch, a few tutorials about sound manipulation are followed, ir order to distort a given audio track according to the use of the glove. For this time, a sound piece from "Das Triadische Ballet" from Oskar Schlemmer is used. The idea is to create a new and different piece by applying sound filters, distortions and echo effects. Two of the effects are controlled from the glove, while two others need to be controlled from the MAX patch itself -in the future would be ideal to have more "control rings" on the glove, that would allow complete control over all the filters-. 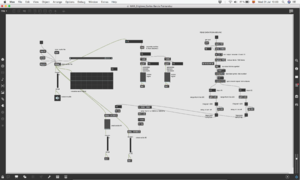 The patch is then splitted into three main groups; the first one loads the audio track form the PC storage, opens and plays it using the sfplay~ object, among with some other sub-objects that allow loop, pause, resume, visualize the audio signal and control the volume of it. 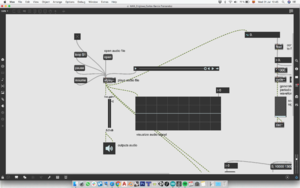 The second group would be the one used to create the sound effects, by extracting a number from the sound track and applying waveforms with different cycles that will produce different sound accordingly. These sound effects must be controlled from the MAX patch, lowering and rising the signal/volume. 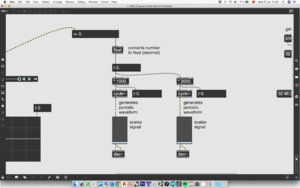 The third group creates echo effects over the main audio track, using two delay objects, each one triggered by one of the "control rings" on the glove. In one of the echo effects, a ramp and line object are used, to modify the echo effect over the time (a loop of 13 seconds). The gain/volume of each echo effect can be controlled manually from the MAX patch. 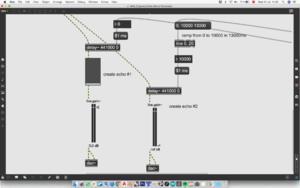 The forth group loads the information from the arduino board, translating the readings from the pins into bang signals that will trigger the echo effects. This section of the patch was developed following the instructions to be found at Kaël Shyhawk wiki page. First the connection port is detected using the serial and print objects, and the readings are converted first to a symbol and then to a number object, that will be splitted into the two different inputs (pin A0 and pin A1), used to trigger the echo effects. Each signal is refined, taking just the values over 250 to avoid false readings. 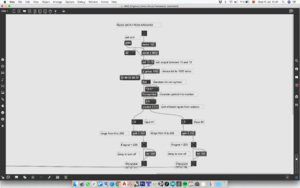 The arduino sketch is uploaded to the board connected to the glove, and reads whenever the "control rings" send a signal. It is developed following Kael's wiki; using two analog pins and the readings from those two inputs, sending them to the serial monitor with a baud rate of 9600 (same as used in the MAX patch). These values -val0 and val1- are read from the MAX patch and used to generate bang signals that will trigger the echo effects. 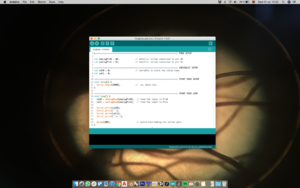 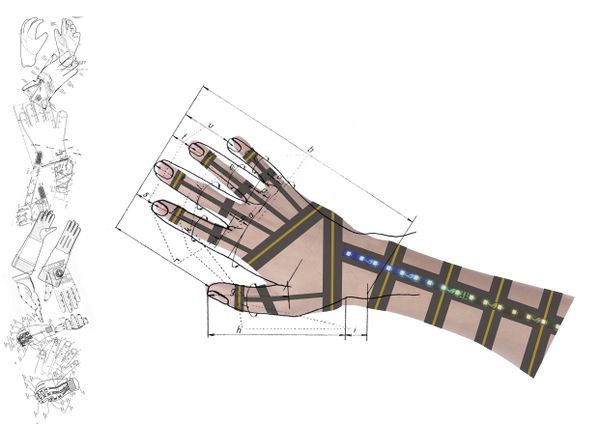 Would it be possible to create an orchestra of light and sound based on our breathing patterns? on our heart beat rate? on our corporal temperature and moisture?


Would it be possible to create a wearable that would collect all this data?
maybe a mask? a helmet perhaps?
is it just a small device? or is it more like a whole suit?

How would we sound and shine like while sleeping? or while doing some kind of physical activity?


Would it be possible to combine more than one personal orchestra to get a collaborative composition? light and sound merge together