For this Experiment I was following this guide. After prepearing and mixing I took it home to observe the bacterias growth. 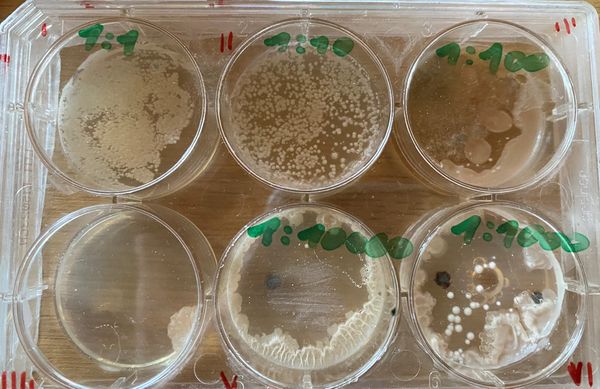 The 1 and 2 show the same behaviour. Small dots grow all over the petri dish just mass/coverage is decreased. In the dished 3 , 4 and 5 a different growth structure is visible. In these a serried growth from the edge to the middle is visible. Additionally small dots appear in 3 there are few dots than in 1:1000 and no rhytms in the growth from the side. Comparing 4 and 5 to the rest: Both show structure and rhythm in the growth from the side, the rest doesn´t. This might occur due to the mold growing inside which grew on accident. Comparing 4 and 5 to another the difference in the thickness and mass of the dots and patterns, rhythmsis visible. 4 has more dots than 3 and 5 which goes againt the "theory" the dots decreasing. Also in the reference dish 6 a small space is covered in bacteria which should not have happend.

I can not explain why the behaviour, patterns changes nor why the intesity changes from 4 and 5.