My first idea was to use a light sensor to capture the closing and opening of my fridge door during breakfast preparation.

This could serve as a device to monitor your workflow in the kitchen; it could help to minimise the time the fridge door is open and thereby decrease the consumption of energy.

Then I thought of using the light sensor to capture the emptying of a glass.

It could be a device used in bars: When the glass empties the bar man is notified to take a new order. Or the amount of what you've drunken is monitored for payment afterwards. Or to prevent drinking to much. Or it could be used in a drinking game.

Here I captured shady areas with a light sensor while walking around at night.

Finally I wanted to capture the hopping from one channel to another with a light sensor.

A police man in Brooklyn needs help eating a donut because Homer Simpson is around.

Herbert, a fifty-four year old police-man from Brooklyn, has been awake the whole night. There was an open-air concert in prospect park and he was on duty. He had to take care of under-aged drinkers and prevent drug selling. Three people were arrested due to an argument that went out of control.

Back at the police station he just slumps into a chair in the staffroom, unable to walk home right away – his wife is at her sister’s and stays until next Sunday anyway. He fixes himself a cup of coffee and returns to the chair. On TV an episode of “The Simpsons” starts; he’s keen on the series for a long time and to the amusement of his wife Charlene yells with laughter at Chief Wiggum’s foolishness. He decides to stay a bit longer and watch it. Eyes glued to the television he reaches for the pack of donuts. Pulling is hand back it is sticky with icing – the donuts must have left the fridge a long time ago. He doesn’t have the energy to get up again to wash his hands. Besides he doesn’t want to miss a moment from the episode. But fortunately he still has the small cleaning device with him that Charlene gave him for him for being on the beat. It is attached to his belt and starts automatically when he puts his hand in it. Herbert thinks that it really feels like a massage and even relaxes a bit.

and the next one:

A mother in the kindergarten needs help finding her daughter because her daughter has changed her hair colour.

Clara is very happy because she was able to get the day off to have her long yearned for mid-of-the-week-relaxing-day. So after she woke up, she has a croissant for breakfast and comes to the conclusion that the coffee is unusually good; she guesses to taste a smack of cinnamon. Then she uses the midmorning to do some shopping and by midday starts to some gardening. While doing so there’s a hint of a smile in her face: She thinks of her husband Kenneth who always finds it kind of funny that she enjoys gardening that much. The two of them are married for five years now and have a four year old daughter called Anna.

By 2 pm she gets ready to pick up Anna from the kindergarten. When Clara arrives she is devastated since she had totally forgotten that there was a fancy-dress party planned. She looks for her daughter, but the tons of children in costumes and colourful wigs make it impossible for her to find her daughter: Clara has congenital prosopagnosia which means that she is unable to recognize people by face. Through the years she found ways to handle it, e.g. identifying people by voice, build or movements, but right at the moment none of them helps her and she doesn’t want that Anna finds herself in the situation that her mother doesn’t know who she is – Clara considers Anna too young to understand. But fortunately she has the face recognition device with her. The software is implemented in her sunglasses and as soon as you feed it with a picture of a person and determine where the eyes, etc. are, it tells you who’s in front of you. This way Clara manages to find her daughter and can hug her immediately. 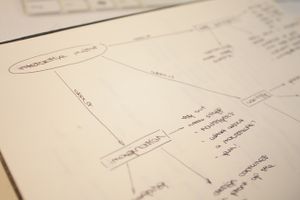 After having settled on the idea of an interactive mirror I asked myself what this device could accomplish, to which needs it could respond to.

Finally I thought of three topics the mirror could talk about:

To see the whole mind map follow the link below.

I created the kit with the purpose of gathering information about how people use mirrors regarding the above-mentionend aspects: self-perception, vanity and imagination.

The kit includes a questionnaire, a diary, post-its and a disposable camera and I gave it to four persons for a period of four days.

Additional to the oral briefing I attached a written one as a possibility to look the information up. These were the tasks:

With the questionnaire "trying a shot in the dark" I wanted to create a form that differs from tradtional surveys. My approach was to trigger answers by making claims about the person and ask him/her to say what he/she thinks about it. I wanted to offer the possibility to become creative filling out the form and have fun doing so.

The fourth person forgot to fill it out.

The participants took pictures for four days. They captured everything from everyday routine to coincidental glimpses, they shared their current mood or hid behind their activity. And they showed me that even shadows can be interpreted as mirror images.

In the following I attached some extracts from the diaries. I found it quiet extraordinary how much I actually got to know about the person's lifes.

There was a diversity of motivations for looking in the mirror:

But most striking is the fact that almost all of them stated in one way or another that they sometimes wished not to see their reflection or that it was totally unnecessary to look in the mirror.

With the video mock-up I seized on the idea of a mirror that can refuse to give a mirror image. But for narrative reasons I settled on a more traditional concept of being able to set a mirror to 'mute'.

Wouldn't it be great to decide wether a mirror shows one's reflection or not?

Jeonghoon Cha and I held a talk on the book "Design Noir" written by Anthony Dunne and Fiona Raby. If you're interested in the topic, simply check the presentation paper for some more information.