1 combustion or burning, in which substances combine chemically with oxygen from the air and typically give out bright light, heat, and smoke: his house was destroyed by fire.
2 the shooting of projectiles from weapons, especially bullets from guns

1 stimulate or excite (the imagination or an emotion)

1 strong and barely controllable emotion
2 (the Passion)the suffering and death of Jesus: meditations on the Passion of Christ.

1 the natural agent that stimulates sight and makes things visible
2 understanding of a problem or mystery; enlightenment
3 an area of something that is brighter or paler than its surroundings
4 a device that makes something start burning, as a match, lighter, or flame
5 a person notable or eminent in a particular sphere of activity or place

Six motors with thread in the shaft of a motor will be on top of the installation hidden behind speakers that will be making sound according to the temperature sensors or bulb base with tungsten cables. On the lower part of the installation burning candles will lay on the floor. The thread will be hanging and when it reaches the candle it will start burning. The fire will then go all the way up until it reaches the light base sensor. When its temperature changes, the sound will also change and the motor will release more thread so the process be repeated again.

The tungsten cables that are used to light up a bulb are good sensors for temperature. With the right debugged arduino code they can become in very sensitive heat sensors, they work amazing with fire.

A research was made to find out how the light bulbs work and how to break its glass. Tungsten can be used in many electrical systems, specially involving fire. People have developed experiments such as flame speakers to listen sound through its exposure to fire.

Light bulbs are very aesthetic materials to work on. They do not need to be all the time giving light but many of their parts can be used. Most light bulbs nowadays are made with LEDLight-emitting diode lights or halogen gases, to make them last longer. Finding the correct lightbulbs was a little bit hard.

Three bulbs base were connected to arduino to test different temperatures given by different types of tungsten assembled cables, some were giving numbers from 200 to 400 and others from 500 to 800. This was displayed in the code as the frequency of sound within the speakers. By debugging the code and using the "map" function, the analysis of temperature can be clearer and more precise to a thermometer measurement.

The code was giving some troubles because each one of the speakers connected to the sensor had to have a "tone();" and "noTone();" so each sound would respect the other. Multiple speakers were then connected and working, each one of them reacting to their own sensor.

For the yarn to be going down a motor was the best option. A slower DC motor with a switch was developed to get to know how it works.

It works fine right now but it needs extra elements or a different type of yarn so it goes down by itself. Some hacks need to be done. But some burning tests on the yarn need to be also done to get the fire controlled.

Another code was develop, one that included the reaction of the motor once the sensor changes its temperature. Some debugging needs to be still done.

This is how the final setup with no fire is looking right now.

THREAD An investigation about how different threads and yarns burn will be made. In the meantime and as a quick search through internet a very interesting videowas found where a girl shows an analysis of how different materials burn.

Two threads were tested a wool one and another one unknown but that seems to be cotton and acrylic or something similar. The wool thread burned faster than the other one and it left nice ashes. The research will continue. 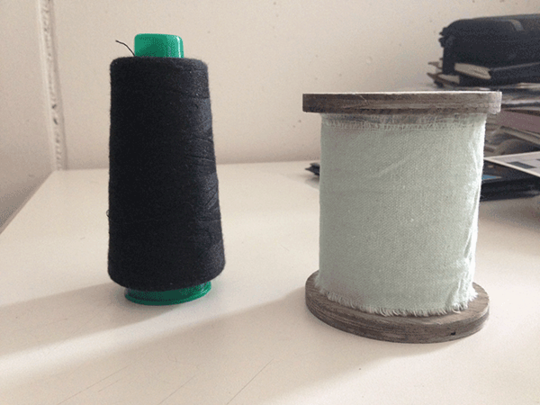 OTHER EXPERIMENTS, APPROACHES AND INSPIRATION

Experiment from 1968. Some people have recreated this experiment but the hazards of building them are great. The equipment required is also very specific and it deals with high voltages and dangerous gases.

The flame of a candle is a plasma effect, with the right gases and the right voltages (also dangerous) a speaker can be built out of it. There is a good instructable about it which shows how to build it.

Information about Fire and plasma

The whole struggle to separate the ions of a candle's flame are really amazing and not many people can do it. High voltages are needed to create an electric field and with ionized plates the flame creates amazing figures until it dies. There is something quite poetically in separating the elements which composed the flame and then letting it die, it all happens so fast and beautiful.

This is a video demonstrating its behavior and the death of it.