The first time I came into contact with the topic of PCB Arts was through this module. Before i knew what PCBs were and how they are normaly used but I did not know about this large community that uses this medium in an artistical way. What really fasciated me is that there is a big part of this community that is just dedicated on making PCB badges. So for my final project I created such a badge.

The whole design of the PCB is based on the functionality of the first schematic I searched out to practice in Kicad with. Over my development time on this project, the schematic and with is the curcite, as well as the design have gone trough a few changes and adjustments.

The basic board design is made to look like an old school american police car. The main function of the curcite I used is to flash two LEDs alternately. This reminded me of a siren typically mounted on top of ambulances, firefightering vehicles and police cars. So this inspired me to design a PCB in the shape of a old school police car. To make the board a bit more interessting i added four more LEDs, so that not only the sirens would flash but also the headlights of the car would light up.

The Curcuit of my board can be seperated into three different parts. The power supply that consist of a nine volt battery that provides the entire curcuit with enough power and a switch with wich you can join and break the powerline connection to the curcuit, so the LEDs turn on and off.

The third part is much simpler than the second on. It only consists of four LEDs and four resistors. Above each LEDLight-emitting diode a resistor is connected to it. The resistors regulate the voltage that flow into the LEDs. if these LEDs are submited to to much current they will burn out.

Here is the link to the website that I used as research. It explains the "Astable Multivibrator Curcuit", from this schematic I build up my curcuit.

The curcuit on the actual PCB board is a bit different. Instead of two transistors with each three pins, there is only one transistor with six pins. Both transistors are in one chip but it still fulfils all the functions of the two transistors. It simplifies the curcuit and saved some space. 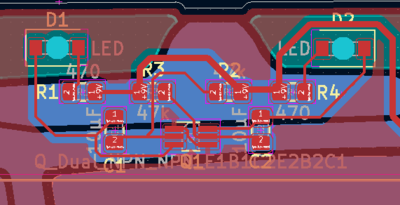 Like I have written in the first part of my documentation I've designed my PCB board to look like a old school police car.