The concept of my project is based on knowing the unknown. Ever since I moved to Germany I have been dealing with new cultures, people, languages and so on. The experience of being in a place where not only the language but also the way the people move, react, eat, dance, express is different was and is still a big challenge to me.

Being surrounded by different cultures and languages gave me the inspiration to develop the idea of this project. Istanbul to me was also unknown, so I took the challenge again, to try to understand their culture, dealing with a new language, people, and so on.

This time I thought of sharing my experience. I wanted the people who are in a known environment and culture to feel and interact with the unknown. This is how the idea of developing a "language" game came up.

Eh is a spoken interjection in many languages such as English, Armenian, Hokkien Chinese, Japanese, French, Italian, Greek, Hebrew, Spanish, Persian, Portuguese, and Catalan and many others that is similar in meaning to "Excuse me," "Please repeat that" or "huh?". Even if you do not know any of these languages you can still understand the meaning of Eh?. This is the concept of the game, even if you can not speak some languages you can still recognize them either with sounds, movements or cultural characteristics.

There is a story behind every video of the game. People from many countries of the world made a 10 seconds video where the only task was to say and express whatever they wanted to in their own language.

Ehh? the Game was ready to go to Istanbul and be played for the first time by unknown people in their own known places.

Before going to Istanbul I had a few clichés in mind that I wanted to figure out. Some of them were that turkish are very conservative people, not very open-minded, very nationalist and so on.

So my first challenge was to display a game in the city through the relatively new QRQuick Response Code - zweidimensionaler (Bar-)Code (Software in vielen mobilen Endgeräten mit Kamera enthalten) code technology.

I chose the neighborhood of Beyoğlu to display the game. This area is well-known for its young 24/7 life. How? The game was linked to a QRQuick Response Code - zweidimensionaler (Bar-)Code (Software in vielen mobilen Endgeräten mit Kamera enthalten) code sticker. People were supposed to scan the code with their smartphones and immediatly start playing the game. The whole neighborhood of Beyoğlu was spammed with the codes and the people were starting to get very curious about them.

After a week that the "QRQuick Response Code - zweidimensionaler (Bar-)Code (Software in vielen mobilen Endgeräten mit Kamera enthalten) codes ehh-Spam" was on the streets, I started to get involved with the people who were scanning and playing on the street. I asked for they opinions and whether they would like to be part of the game. They were all very open with me even if they did not know me. Almost all of them loved the game and wanted to keep on playing. The interesting thing came when I asked them to be part of the game, with their own language. To my surprise many of them, even if they were born in Turkey, wanted to do it in another language such as Armenian, Greek, even Kurdish. And this is how the second part of the game came up.

Something I found very interesting during my stay in Istanbul, is how diverse and full of stories a city can be. While I was getting the feedback of the game, some interesting stories came up. Immigration, territorial, political and social stories from which I got very excited and inspired to develop the second part of the game. Languages behind Languages is based on the many diversities in one city. Even if turkish is the main language in Turkey, there are many other either languages or dialects hidden in the whole country. So this time, the people in the game are speaking in their own languages, the one from which their families emigrated from.

For the Summary Exposition I displayed the game throw the QRQuick Response Code - zweidimensionaler (Bar-)Code (Software in vielen mobilen Endgeräten mit Kamera enthalten) codes. To better understand the project I made three other codes linked to different videos which explained the story behind the game. Finally the fourth code was the game. 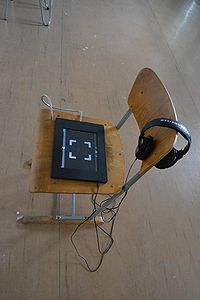 The challenge that I took of going to Istanbul and braking the myths and clichés that I had before being there and interacting with the people was 100% positive. Istanbul is a wonderful city, with a very open-minded youth willing to change the social, political, conservative barriers that they have.

The game is still running, the people are still playing thanks to the feedback on Facebook (http://www.facebook.com/Ehhthegame). The number of visitors is still increasing having the most numbers of visitors in Turkey.