The ‘Body Habitat’ project, as a media-artistic-scientific examination of non-human forms of life, explores and translates the artistic work with a vital organism and its habitat into a living sculpture.

The organic starting point of the project is the genus of the slime mold (Mycetozoa), specifically: Physarum polycephalum.

The hybrid sculptural habitat for a living organism, connects the slime mold‘s natural habitat - the woods - with the life it has been habituated to lead in monitored and controlled human captivity -the petri-dish- . To this end, these two ‚habitats‘ are artistically translated by visually comparing the surface structure of trees to the human body in a 'form- study’. The study of shapes and forms reveals numerous textural similarities directly connecting the two. Followingly, the final sculpture, cast from an actual tree, implies a corporeal impression, in which the human body represents an analogy for the human-centred perception of nature and questions how we encounter other species around us.

In the temporarily living sculpture the slime mold acts as an agent of nature, as it grows, moves and covers the defenceless limb. What appears a body-like member, exposes our vulnerability. It hypothesises how by exceedingly cutting ourselves off from natural forms and personal interactions with other lifeforms we grow exposed and vulnerable in time. 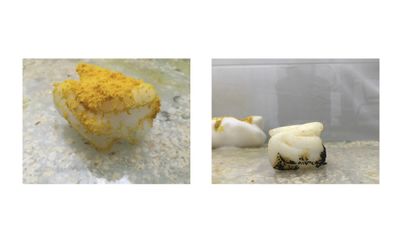 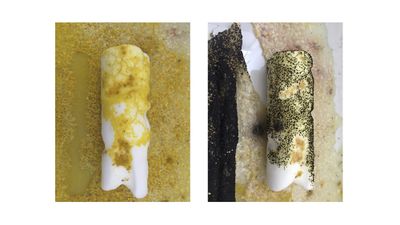 Society is increasingly replacing the relationship to other living beings and forms of life with the digital world. This is precisely why it is important to continually reflect on how we approach our natural resources, the environment, sustainable living and to lead the viewer back to the direct confrontation with nature. To do this, the overall goal of the project is to create a visceral connection between the viewer and a completely different form of life - the slime mold -, who’s habitat and abilities for survival are a central theme in order to emphasise the connection between humans and nature, as the most original source of knowledge and innovation.

The creative work process is characterised by the numerous difficulties in controlling an organism according to the human will. Ultimately, the artwork is self-organising as the slime mold determines the outcome in response to the conditions of the provided habitat. This includes a possible return to a more natural unpredictability and life cycle beyond the vital, plasmodial stage of growth into the development of spores (sporangia), hibernation (dormant sclerotium) or death.

In the end, the question of how living matter relates to the characteristics of form is posed: Will the slime mold Physarum polycephalum behave in a desired way in this new situation?

What happens in the area of tension between laboratory and nature?

(1) Which parameters need to be closer to a lab context vs. which can more closely resemble the natural environment to tend to the ,needs’ of the living organism while realising the sculptural vision? (2) How does my human influence manifest on a controlled, repeatable visual level? i.e. Can I control the look (structure, color, movement)?

Parameters and design experiments All parameters that influence the slime mold‘s ability to sustain the plasmodial stage of growth (the needs) are pinpointed, controlled and adjusted between the natural habitat and the lab context in order to habituate the unicellular organism out of the petri-dish into a hybrid situation (the sculpture), inspired by the natural condition. The main parameters discovered and reconfigured in individual design experiments are:

For detailed explanations of parameters, individual design experiments, conduct and outcomes please look into the pdf documentation (excerpt from the reader/book):

The imperative was to begin as close to the natural habitat of the slime mold as possible. In a first step, I went into the woods to inspect and collect tree branches and trunks from the forest floor. The tree, in the end, serves as a figurative meeting point between the natural habitat and the human interaction, influence and perspective onto the organism. A foreign yet fami- liar form, which itself has life pulsing and oscillating through its vein-like network. In this visual construct the man-made state of captivity in a lab is represented by ‘the body’ and the untouched natural habitat is represented by ‘the tree’. The time spent observing in the woods resulted in a study of shape and form similarities between human and tree. From these observations evolved the search for specific traits on tree trunks or branches that connect both the human and non-human. Direct visual similarities to the human body include features like creases, folds, scars, structures of muscle or bone, stretch marks ... a collarbone.. an elbow. In a further step to bring forth the body-like characteristics of these wooden features, the shape of the selected branch was taken by a silicone mould. From this mould a second branch was cast from hard wax in a faint skin-tone colour.

This second wax branch, an impression taken directly from nature, becomes something between tree branch and severed (corporal)limb. An oversized elbow with stretch marks that hint at muscular veins just below the surface. Stretch marks as a signifier of both human and non-human life and growth. Scars and cuts on the outer most protective layer that hint at vulnerability underneath. A new terrain for the vein like slime mold to live on: 86cm in length with a radius of 3cm. An interplay of surface, texture, colour, structure and patterns emerges. Can Physarum polychefalum survive, live and grow on this altered habitat? Or will it quickly retreat, reproduce or hibernate?

The wax branch will be suspended from a metal-backdrop inside a plexiglas box with 8 small holes at top and bottom for oxygen to flow.

The initial transfer of the slime mold onto the wax branch will take place as an 'Incubation-phase': a lab standard Agar base (100cmx40cm) with oat flakes is provided to the slime mold.

Once the organism has reached a substantial size the wax branch is added for a 'voluntary transfer' (*see design experiments) to take place. For (aesthetic) presentation and preservation purposes the branch is transitioned onto the wall - away from the Agar and oat flakes that grow additional bacteria and molds - suspended instead in a sleek, plexi and metal presentation format.

A comprehensive reader to accompany the living sculpture, containing documentation of working artistically with living matter.

A collaboration with a unicellular organism. A hybrid setting for an organism to behave in a desired way.