Colaborative work that foudn its roots during the workshop in Sauen where I participated in performative experiments with Tanja, Eri, Mirce Dovile and Yawen. We came from different perspectives but we were all especially interested in performative strategies to deal with the questions: how do we make decisions and what are they affected by, is there an intelligence within a collective that is more than just the sum of the intelligence of every individual. We decided to form an collective, work together and try things out. The MTST_collective formed and started working in Berlin.

The performative piece is inspired by the idea of universal computation and system theory (Stanislav Ulam & John von Neumann/ Cornways Game of Life). This way each person/performer is understood as a similar but unique cellular-automaton-like element with his own rules. Through interaction with living or non-living objects the rules of the person change, thus creating more complex patterns. Through the performance we discuss the questions of natural / unnatural, individual / collective decision-making and the idea that all subjects and objects in the environment effect each other. Rules: PDF

Every performer had to decide about his/her own walking pattern which consisted of steps and turns and pauses. Along with that we decided upon different rules the performers had to follow when it comes to interaction with the environment. These rules effected the behavior of the individual performer and their walking patterns. By reacting to animated and inanimate objects with certain movements or sounds the interaction with the environment leads to a more complex group pattern. 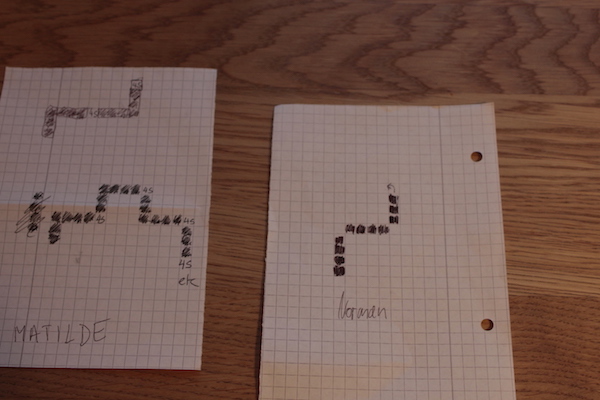 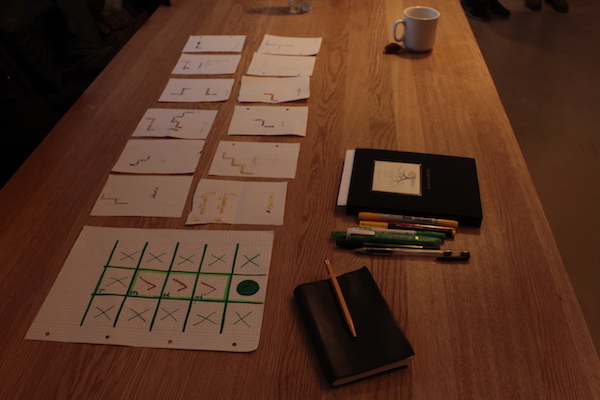 The decision making process within the collective was not always easy. We discussed a lot about what the rules should be and how much and what kind of interaction with the audience is good. According to our background and knowledge we split some tasks: My role was to do the warm ups with the performers in order to make them familiar with the environment, both physically and conceptually. It was especially important to create a group dynamic that will allow everybody to stay concentrated and be able to be aware of ones own bodily presence as well as the the bodily presence of the group and the people around. The aim for me was to form a group that is able to act like a collective intelligence/ organism.

I did some easy games that mainly focussed on one or two simple rules the performers had to follow. e.g. the enemy & guardian game we also played in Sauen. This game allows the actors to become aware of their body and position within a room, to take self responsibility and to get the body circulation going. They can notice how the smallest steps can have a big impact on the group and how their individual behavior changes the movement of the whole group. It is a closed system they can not escape.

To find out more about the warm up games and general feedback we got and gave during the rehearsals you can also read in my Logbook: Media:MTST Logbook LieseEndler.pdf

Our last rehearsal took place at Sony center in Berlin, which was an important first contact to the public: 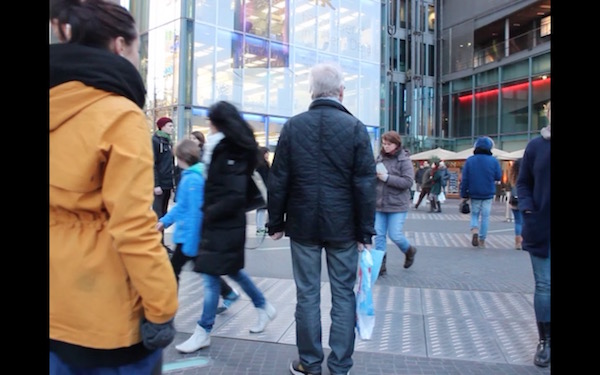 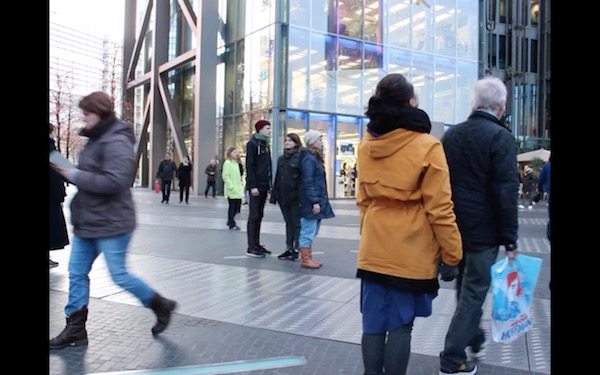 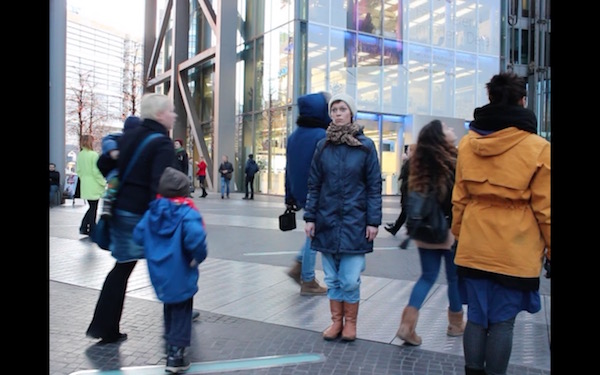 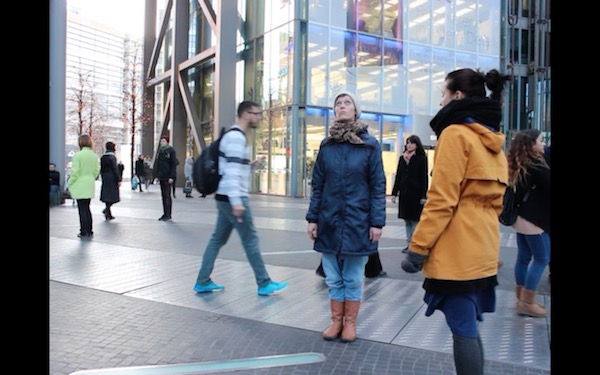 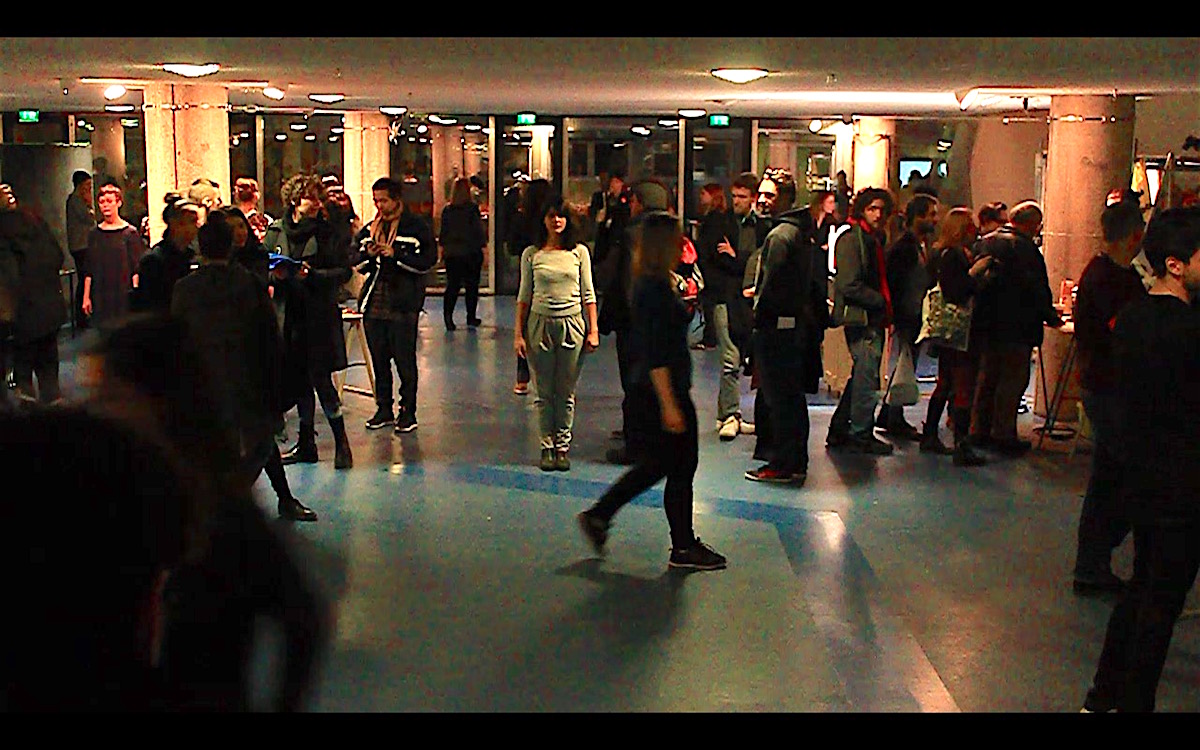 The first one started at around 3.30pm and at that time there was already a huge cue at the “freecoffee”Bar from Matthias&Paul.The performance started and in the first few minutes there was not a big change in the space. People kept on exploring the other artworks and tried to avoid colliding with the performers as they sometimes were really close to some people. After a while the structure of the room had changed and the cue looked or more open and the place less crowded. 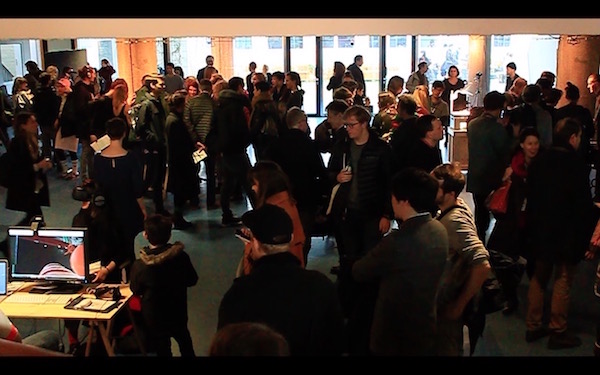 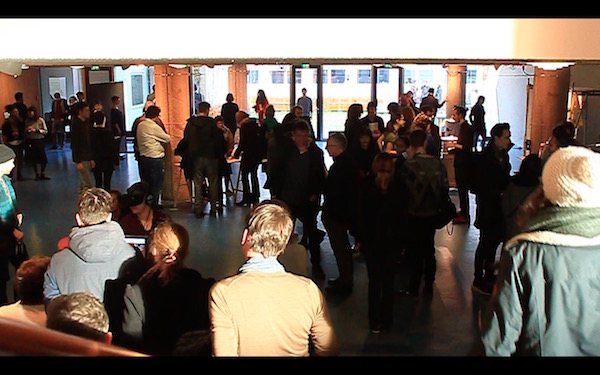 Some people stood still observing the performers or took a glimpse at them by walking across them, while others ignored them completely or simply tried to get out of their way. Though some visitors were standing really near to the performers laughing, wondering or even confronting them, they stayed in their role and followed their patterns. The most obvious interaction was the group humming from time to time. Sometimes the whole space was filled with a loud humming noise that seemed to calm down the other voices. 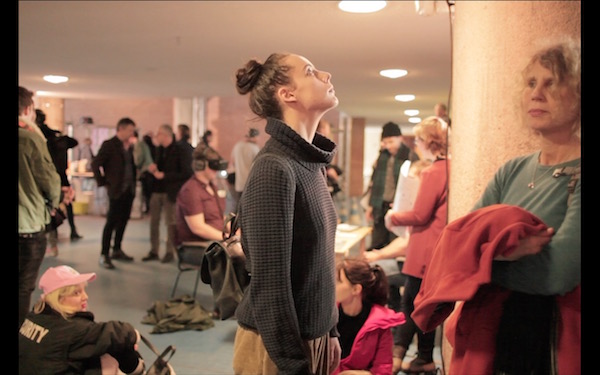 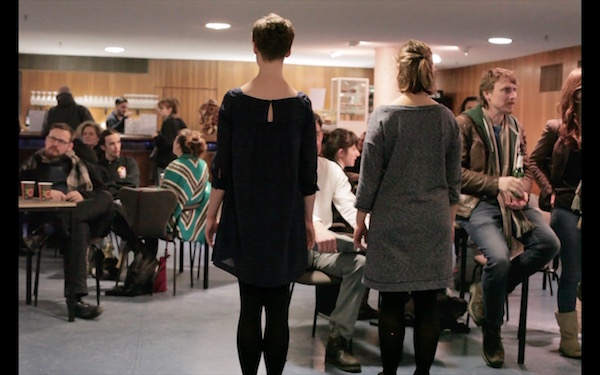 Some felt like after a long time of practicing and also during the performance they were in some kind of trance and behaved without thinking. They implemented their walking patterns to their body so they acted automatic as soon as the performance started. Some performers said they liked being close to people and irritate them while others told us that they were touched by people which made them uncomfortable. Still they stayed in their role. 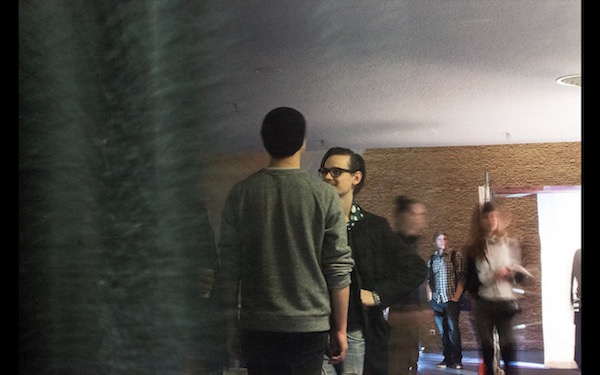 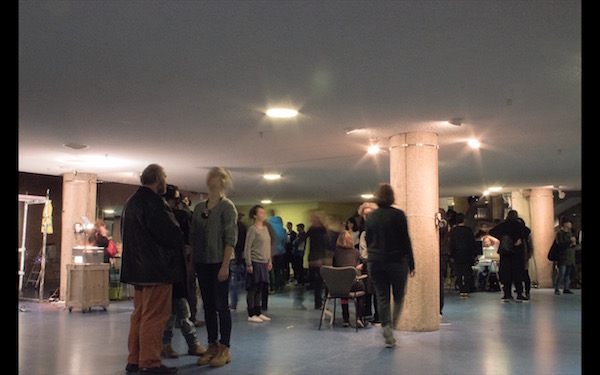 Like in theater or performance art usually we had no clue how people would react to our performance. Would they like it? Would they recognize it or not? Will it have an effect on them anyhow? It was not our aim to exhibit something that would draw a lot of attention and be understood as performance in the first place but we wanted to effect the way the people behave and move through the space on a subliminal level. Some people clearly realized that there was a performance going on and they respond immediately (standing still or laughing, looking really close and look away). Their body reacted to the movement of the body of the performer in a certain way. An than there where others which might not even have recognized that there is a performance going on, but the way they move through the space was somehow effected by the performance and the way this gave structure to the space.