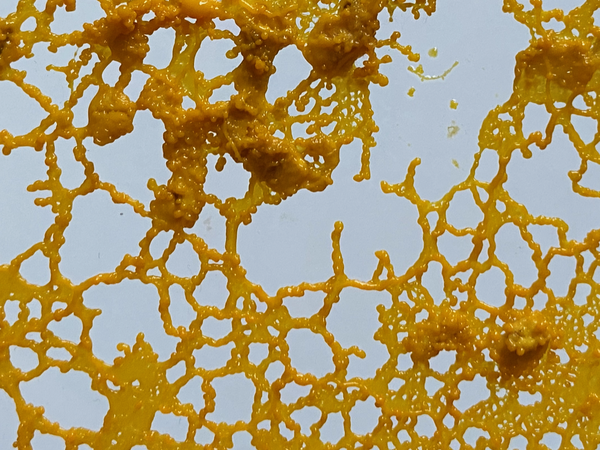 The project ties in with the question that had been foreshadowed during the research. What does Physarum Polycephalum like to eat? Is there a preferred source of nutrition; a „gourmet food“ for the slime mold? For the examination oats are prepared in different ways – ground, pureed with liquid, left in liquid to soak overnight. Additionally, other foods and organic materials are arranged together with the oatmeal on a small plate. Little bubbles with nutritionally enhanced agar provide the slime mold with the necessary moisture, while swooshes of Escherichia coli bacteria provide additional nutrition. Finally the arrangement is topped with a small selection of microgreens. A time-lapse recording makes the eating behavior of the slime mold tangible and provides for a subsequent artistic-scientific evaluation of the consumption patterns.

Besides the mere investigation, the work aims to provide a change of perspective for both the slime mold and the observer. The food is adapted to the (speculated) nutritional specifics of the slime mold and plays with its expectations through surprises. Therefore a work is created that does not have the human being in the center of attention. This non-human centered design asks what we can learn through inverted or subverted power relations, where the human actor is not on top of the hierarchy. How can this influence our choices and our motivation to create?

Physarum polycephalum was studied using time-lapse photography. Time-lapse recordings were tried out in different settings in order to build up a functioning set-up for the examinations/recordings.

Figure 7 shows the setup used for the subsequent recordings. A raclette pan filled with agar provides a soft, dark background and the appropriate growth base, while a floor lamp is used to ensure even illumination. A white, reasonably light-tight box with a lid protects the recordings from other light sources. In Figure 8, preparations are made for a two-part case study called "Social Slime?". It asks how the growth of Physarium polycephalum behaves when the slime mold grows in a (circular) zone that provides it with enough food. Does it stay in the area it knows, an area without enemies and with enough food? Or is its urge to explore – in other words, perhaps its social behavior – so great that it moves away from its home, to meet other species and new food sources.

For experiment one, a circular strip was removed from the agar layer. Oats were added to the excised area to surround the slime mold with it. The cutting out resulted in a shrinkage of both layers, and an unintended expansion of the cut-out area. Nevertheless, a certain urge towards the food-covered area could be observed, which stands contradictory to an urge to discover and thus a "social behavior“. In the second case, a circular area of finely ground oatmeal was applied to the agar layer. The growth of Physarium polycephalum in this experiment contradicted the previous study. The slime mold spread over the entire agar surface, regardless of the circular food source.

In order to develop a meaningful project idea about and with Physarum polycephalum, I came to the conclusion that I must first explore the artistic qualities as well as the growth process of the slime mold. In the course of this, some photos and videos were made with the help of the microscopes available in the laboratory. Especially the vein-like structure and the nutrient transport of the slime mold were examined more closely with the help of photo- and videographed material. This resulted in a variety of aesthetically pleasing results.